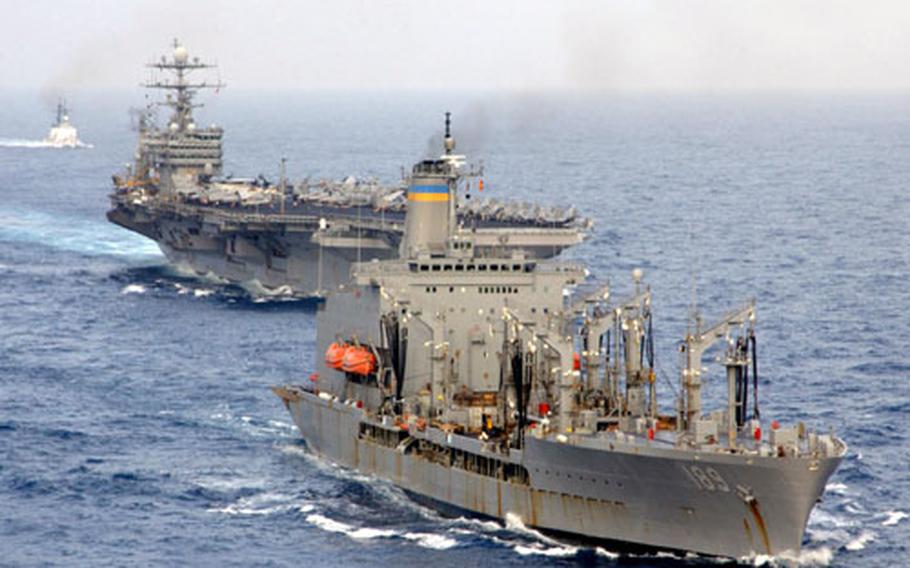 USNS John Lenthall, foreground, prepares to refuel the aircraft carrier USS Harry S. Truman, April 3, 2003, in the Mediterranean. Behind the two ships is the U.S. Coast Guard cutter Dallas. The Lenthall was damaged in Valletta, Malta, Friday after being hit by a merchant ship in the harbor. (Courtesy of U.S. Navy)

The Military Sealift Command oiler John Lenthall was damaged Friday evening after being struck by a merchant vessel in Valletta, Malta.

There were no injuries to Lenthall&#8217;s 105-member civilian and military crew.

Navy and MSC officials, she said, are investigating the extent of the damage to determine how long repairs will take.

Mueller said that the Lenthall arrived in Valletta on April 7 for a short maintenance period during a regularly scheduled deployment to the Mediterranean, which started in February.

The Lenthall is one of 14 MSC oilers and provides fuel to Navy ships at sea.

The oiler was pier side at the time of the accident.

Damage to the other vessels or possible injuries isn&#8217;t known, she said.