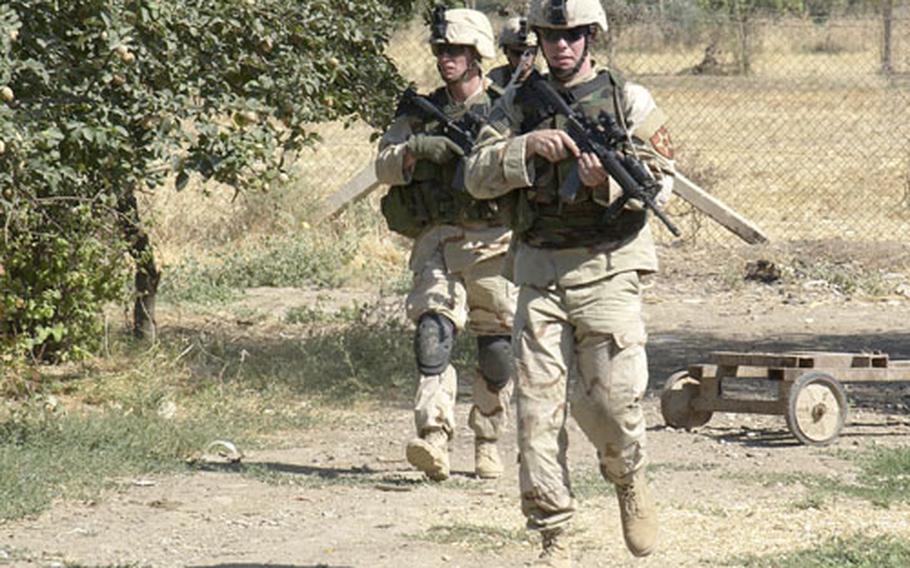 Soldiers search for weapons caches in Mosul, Iraq. The Army has sent a team of medical workers to Iraq to help soldiers fight combat stress. The combat stress teams are hoping that soldiers will become more willing to seek help if they need it. (Courtesy of U.S. Army)

BAGHDAD &#8212; The 2nd Medical Brigade, which oversees nearly all medical operations in Iraq, is chipping away at the barrier that keeps soldiers from seeking treatment for combat stress.

It&#8217;s a fight Army social workers, psychologists and psychiatrists have been waging since post-traumatic stress disorder came into the spotlight following the Vietnam War.

A recent post-deployment screening conducted by the U.S. military showed that more than 50 percent of servicemembers were reluctant to seek treatment for combat stress because they feared it would affect their careers or future promotions.

But members of the brigade&#8217;s Mental Health Section and the 785th Combat Stress Company say nearly all cases that are treated never even go into a soldier&#8217;s medical file, let alone his personnel record.

Of course, commanders and even peers may know that a soldier was treated for combat stress.

More than 95 percent of all soldiers treated for combat stress, which includes stress caused by family problems or even fatigue, return to duty in a matter of days.

In most cases, like that of Staff Sgt. Richard Williams, a maintenance section chief from the 1st Cavalry Division, the soldier is returned to the same position he held before treatment.

Only in rare cases where a soldier poses a threat to himself or others would he be placed in a different section or status, such as under suicide watch or deemed unable to carry a weapon, Evans said.

There are two to five reported suicides each month in Iraq, Grammer said. According to an Army report released in March, 24 soldiers deployed to Kuwait and Iraq committed suicide in 2003 &#8212; a rate of 17.3 per 100,000. The overall Army suicide rate during the same time period was 12.8 per 100,000 soldiers.

Williams was suffering from anxiety attacks, a condition he had before he deployed to Iraq.

Williams first talked to a chaplain, who suggested he try medication. He went to a nearby medical clinic and was put on the wrong type of medication.

After spending a night at the 785th Combat Stress Company&#8217;s fitness center, and getting the correct medication, Williams was able to return to duty.

The fitness center refers more to mental fitness than physical. Soldiers spend up to five days at the center for treatment and follow a scheduled routine of physical training, chores and relaxation in a less intense environment.

Williams admitted the first step to recovery was a big one.

Returning to his unit after treatment was awkward, but Williams said he quickly got back into the swing of things.

Williams is one of many success stories of the mental health staffs throughout the theater. But other would-be successes are not coming forward with their problems. The 2nd Medical Brigade and combat stress companies are trying to change that by reaching out to the soldiers.

In an average 72-hour period, combat stress staffs throughout Iraq will conduct about 180 walkabouts, where they meet with about 700 soldiers and talk to them as a preventive measure. That does not mean the staff treats that many soldiers, only that it speaks to them to get a feel for how things are going.

The staff members see about 88 command referrals during a typical 72-hour period, according to Capt. Jeffrey Greenlinger, a social worker with the medical brigade&#8217;s Mental Health Section. Those are cases in which soldiers are referred for treatment by their commanders.

A group of 12 mental health professionals visited the theater last year and identified ways to improve the situation here.

Among them was bringing in the 1908th and 1835th Combat Stress detachments to add about 60 mental health professionals to the 60 from the 785th already in Iraq.

The 2nd Medical Brigade also created the Help 4 Web site, at www.mnf-iraq.com/2ndmed/index.htm, to link soldiers up with the nearest mental health resources available to them.

The combat stress staffs have spent months talking to commanders, platoon sergeants and section chiefs about getting soldiers the treatment they need.

Apparently, the word is getting out to the troops, like Sgt. Joseph Alonso, 478th Civil Affairs Battalion, and Spc. Christopher Sebren, 1-244th Command Aviation Battalion from the Louisiana National Guard.

But, Alonso added, he knows how to get help if he needs it.

Sebren said he has experienced stress during events such as mortar attacks, but it subsides.

&#8220;After a few minutes it hits you what really just happened, but you try not to think about it too much,&#8221; he said, adding that he would seek treatment if he felt the need, and that he was aware of whom to contact for help.

Mental health staff members go out to even the most remote areas.

BAGHDAD &#8212; Soldiers in Iraq can now find help to deal with combat stress in a matter of minutes, if they have access to the Internet.

The 2nd Medical Brigade&#8217;s Mental Health Section created the Help 4 Web site so soldiers in even the most remote locations can get phone numbers for combat stress professionals.

The site, at www.mnf-iraq.com/2ndmed/index.htm, was a project three months in the making.

While the site has links to chaplains and sexual-assault victims&#8217; assistance, the most important tool to soldiers may be the Help 4 You map.

A soldier can click anywhere on the map, and a page comes up with phone numbers to the closest combat stress teams to that location.

&#8220;A soldier can talk about whatever, and that [combat stress] person makes the decision whether they need treatment or just need to talk,&#8221; said Maj. Ronald Glaus, mental health psychologist.

However, most of the soldiers treated for combat stress, before the Web site was created, were referred by their commanders, said Col. Mike Warvarovsky, the section&#8217;s psychiatrist.

Most of the site design was done by Sgt. 1st Class James McLeod, the section&#8217;s senior noncommissioned officer.

The site also includes links to mental health articles and testimonials from soldiers who have received treatment for stress to encourage other soldiers to come forward if they need help.