Menagerie in the Middle East 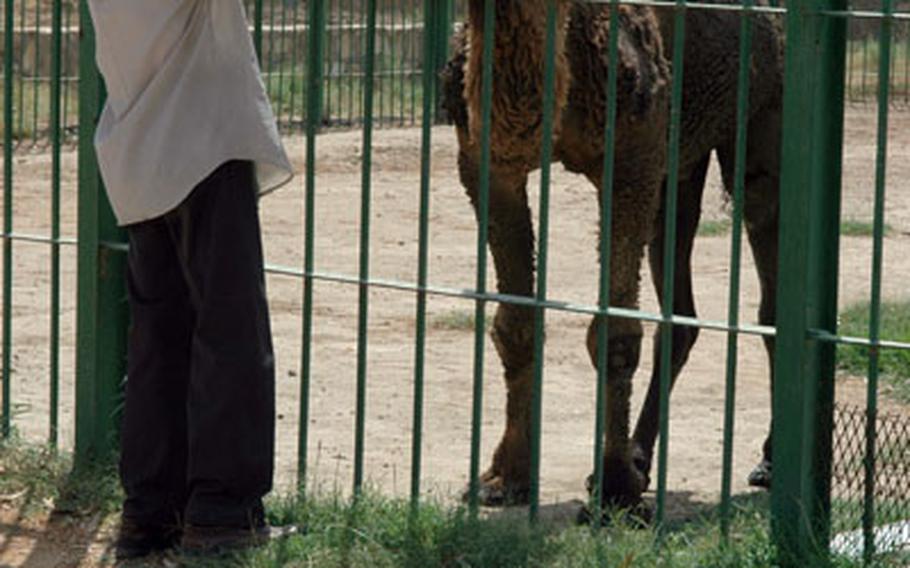 A zoo worker, one of about 160 guards on the 400-member staff, stops to pet a camel. A small team of officers and soldiers from the 15th Brigade Support Battalion, 2nd Brigade Combat Team, 1st Calvary is working with the zoo staff to improve its infrastructure, train its veterinarians, and increase the park&#39;s animal stock. (Teri Weaver / S&S)

A zoo worker, one of about 160 guards on the 400-member staff, stops to pet a camel. A small team of officers and soldiers from the 15th Brigade Support Battalion, 2nd Brigade Combat Team, 1st Calvary is working with the zoo staff to improve its infrastructure, train its veterinarians, and increase the park&#39;s animal stock. (Teri Weaver / S&S) 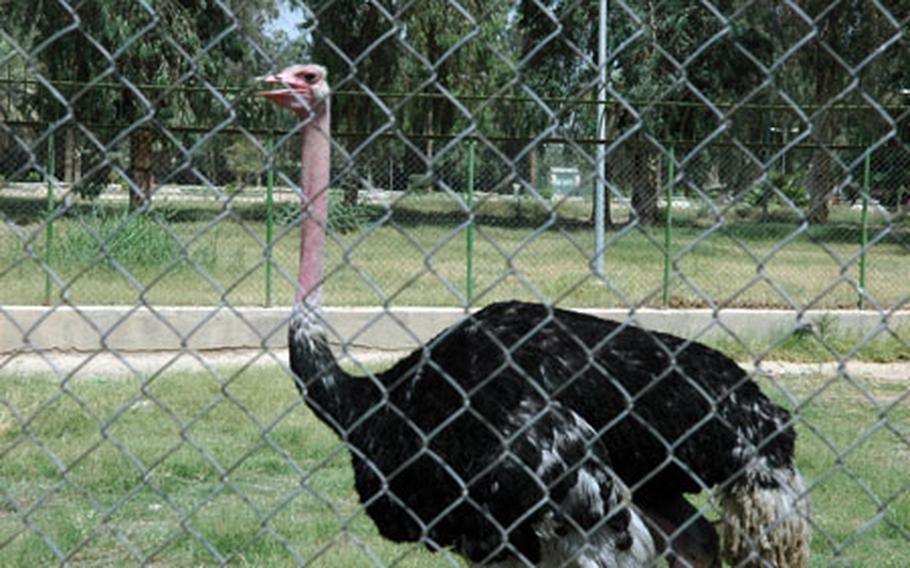 An ostrich walks inside its cage, a grassy section that has little shade. "What we haven&#39;t figured out is how to get animals," said Capt. Amy Cronin, 27, of Boiling Springs, Pa., a project manager with the zoo and the surrounding park. "Who would send animals to Baghdad?" (Teri Weaver / S&S) 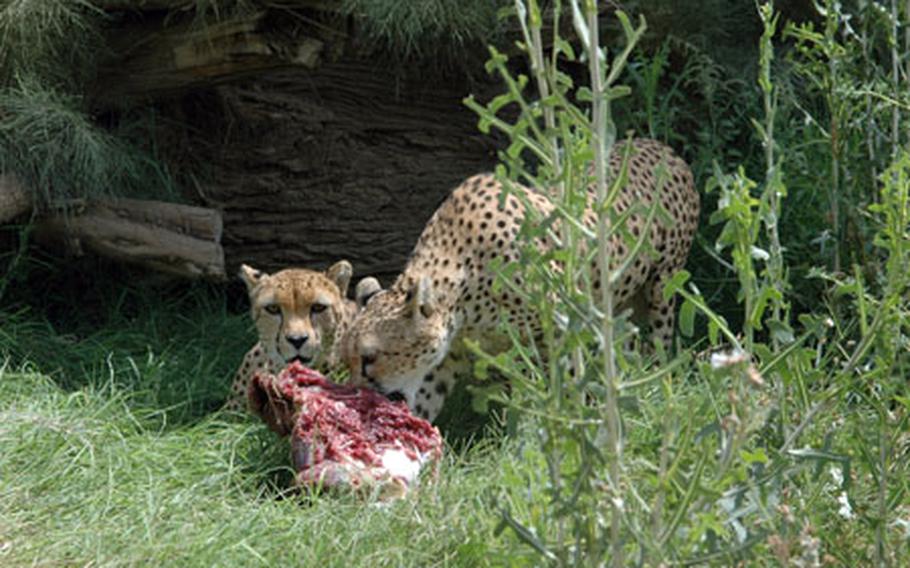 This pair of cheetahs was raised by Saddam Hussein&#39;s sons, who once walked the cats on leashes. They are still tame enough to approach within less than 10 feet, though neither Hill nor any of his soldiers accepted an invitation to pet the cats while they ate. (Teri Weaver / S&S) 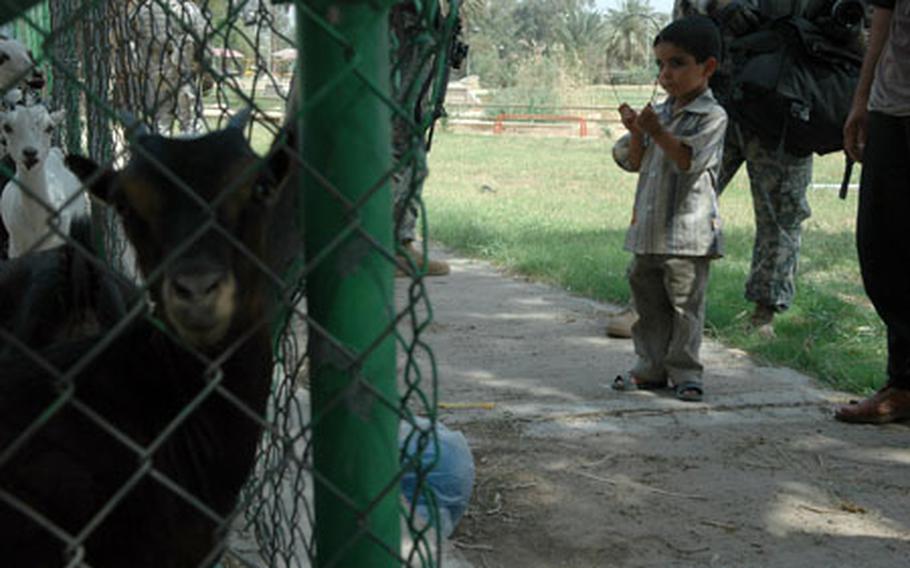 A boy watches the goat cage while his father talks with U.S. soldiers. There has never been any violence or bomb explosions at the park, but recently members of a U.S. battalion reviewed the park staff&#39;s security measures and made suggestions. Some changes included spreading out staff at entrances in case of a car bomb and using mirrors to check the undercarriages of cars. (Teri Weaver / S&S)

After the invasion, workers found about 30. They rounded up what they found on the streets, added two cheetahs that Saddam Hussein&#8217;s sons had raised as cubs, and eventually put a stray dog in one of the green cages.

Now, four years later, the zoo&#8217;s population has grown to about 80 animals. There are two lions, two bears, no tigers. Cockatoos twitter in cages, eagles roost on a concrete aerie, porcupines hide in the shade. A lone camel takes a friendly pet from a zoo worker, and ostriches and a peacock strut slowly in the 116-degree heat.

The good news is that most days the zoo has more visitors than animals, according to a small team of the 15th Brigade Support Battalion, 2nd Brigade Combat Team, 1st Calvary working with the zoo.

About 3,000 people each week pay the pay 20 cents fee to visit the zoo, which is open seven days a week and run by the Baghdad city government. About 400 people work there, including about 160 security guards, according to Capt. Amy Cronin, project manager for the zoo and the surrounding Al Zawra Park.

&#8220;To those families, to those workers, it&#8217;s a big deal,&#8221; said Command Sgt. Maj. Marvin Hill, who toured the zoo Saturday morning. Hill took over as Multi-National Force&#8212;Iraq command sergeant major this month. He said he sees visitors at the zoo as an indication local residents are beginning to feel safer in their capital.

On Saturday morning, few people were inside the park because of a mandatory 11 a.m. to 3 p.m. curfew. Occasionally, a single shot of gunfire rang from the city. Once, a warning signal for incoming rockets blared from a nearby U.S. military base; there was no explosion. Hill and the soldiers around him wore full gear during their visit, a normal procedure outside any military base.

A banner was draped on the zoo&#8217;s front gate to mourn a park worker. He was killed outside his home in recent days.

Despite Saturday&#8217;s curfew, a few visitors wandered about the zoo&#8217;s shaded sidewalks. Families brought their children, bought sodas and watched the caged birds. One man near the outside of the gate said he wouldn&#8217;t have brought his wife and young son a year ago; on Saturday, he said he felt safe and that he brings his family as often as he can.

A second man, inside the park, teetered his hand back and forth to indicate &#8220;so-so&#8221; about the safety level for his wife and child. He said he felt the same a year ago.

The zoo is also a place for courting, and three times Hill pointed out couples who were walking or chatting, sometimes holding hands.

The zoo sits inside Al Zawra Park, a vast expanse near the Green Zone that is filled with soccer fields, restaurants and an amusement park. Cronin said she&#8217;s seen the rides move, but she&#8217;s never seen any of the six restaurants open for business. The whole place operates on about an hour of electricity a day.

The Army has paid $84,000 for four generators to power the aquarium, which has been closed since the war, according to Staff Sgt. Herbert Mowery, 42, of Parkersburg, W.Va.

The zoo is planning to move the brown bears to a bigger cage with a small yard so they can move around. The workers want enough money to buy paint to re-cover all the exhibits.

Other, more ambitious goals take longer to carry out. Cronin and Mowery are working to link the zoo&#8217;s veterinarians with zoos in the States. They also want to improve the zoo&#8217;s pump system, which brings in water from the nearby Tigris River.

But the biggest challenge, they agreed, is convincing anyone to donate more animals.

The battalion began helping the zoo in March, and soon after did a security assessment for the staff. They suggested spreading out staff at the entrances and using mirror extensions to search under cars. Cronin said they are looking for additional money to buy metal detectors and wands, especially to search female visitors without insult.

But there are other things to think about. If everything goes right, she said, the aquarium should open in about two weeks.