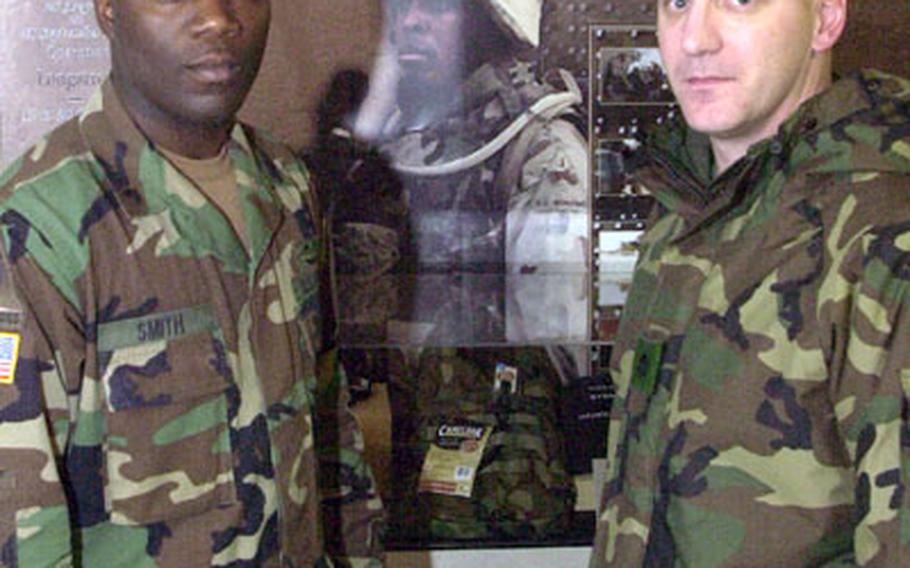 Seeing their experiences documented in a new gallery at the 1st Armored Division Museum took Sgt. David Smith, right, and Lt. Col. Brian McKiernan back to their 15 months in Iraq. (Terry Boyd / S&S)

But they were sure it was a hairy day in Baghdad.

After 1st AD soldiers arrived at the scene, an insurgent ran up and threw a grenade that rolled under a Humvee, McKiernan said. The blast wounded four of his soldiers.

If a successful museum evokes strong emotions from those who lived the history it documents, then the new Iraq gallery at the 1st Armored Division Museum in Baumholder is an unqualified success.

About 100 soldiers, officers and German invitees toured the modest one-room addition Wednesday, including Maj. Gen. Martin Dempsey, the departing division commander, who led the 1st AD in Iraq. Dempsey and Steve Ruhnke, the museum curator, cut the ribbon on the new gallery just after 1 p.m.

The early days of the division&#8217;s deployment were relatively calm. But the 1st AD had several bad days, and the exhibit documents the worst: April 29, 2004, when a suicide car bomber killed eight soldiers of the 4-27&#8217;s Cobra Battery while they pulled security for an operation. The area containing the museum&#8217;s collection of tanks and armored vehicles was renamed Cobra Park on Tuesday, in their memory.

In addition, there are two dioramas. In one, a 1st AD soldier in BDUs wearing night-optical devices, or NODs, questions an Iraqi man in a debris and trash-strewn alley. In another, viewers peak through a hole in wall and see a hooded, AK-47-toting insurgent inside a dark, shabby room.

The debris and dangling wires &#8220;capture the atmosphere in which these missions take place, hinting at the problems we had,&#8221; Dempsey said. &#8216;Steve did a remarkable job in a limited space.&#8221;

As 1st AD soldiers and officers lined up, the memories flowed.