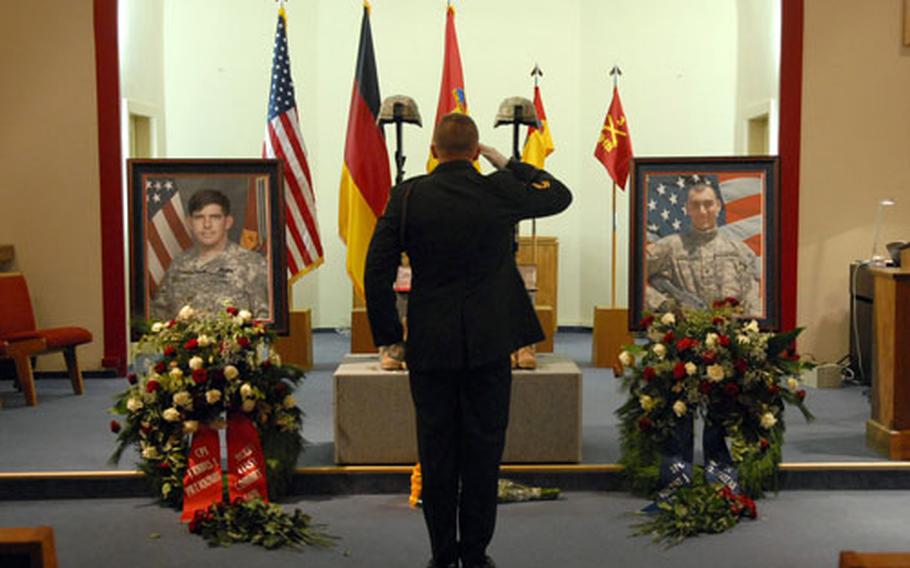 FRIEDBERG, Germany &#8212; With its troops due to return from Iraq next month, the community that is headquarters to the 1st Brigade Combat Team, 1st Armored Division paused Tuesday to remember two of the unit&#8217;s soldiers who died about two months before they were due home.

Both were killed Dec. 6 by a makeshift bomb that went off near their vehicle in Ramadi.

Neither Patriquin, the brigade&#8217;s 32-year-old civil affairs officer, nor Pomante, his 22-year- old gunner, were fighting the war that most people see on their television screens and in newspapers.

&#8220;Yes, they were fighting a battle,&#8221; Maj. Tony Perry, the brigade&#8217;s rear detachment commander, said. But they engaged the Iraqi people on mostly peaceful terms, fighting their battles with words and actions in order to win the hearts and minds of the Iraqi people, he said.

Patriquin, who had spent eight years as an enlisted civil affairs specialist before his commission in 2000 as an infantry officer, had been a standout in this regard. Newt Gingrich, former speaker of the U.S. House of Representatives, made a point to mention his simple, yet shrewd, stick figure slide show, &#8220;How to Win the War in Al Anbar,&#8221; on NBC&#8217;s &#8220;Meet the Press&#8221; on Dec. 17, citing it as an example of how things should be done in order to win in Iraq.

A shaggy-haired mustachioed officer, Patriquin was known as a rebel among his peers, Perry said, &#8220;yet he did have a cause, and that was doing what was right.&#8221;

The Iraqis respected him, made him an honorary member of their tribe and called him &#8220;Warrior&#8221; &#8212; evidence that Patriquin, who was married with three children, was, at the least, doing right by them.

Pomante&#8217;s gifts lay elsewhere. At nearly 6 feet 5 inches tall and 189 pounds, Pomante had been a high-school wrestling star, and Perry said he was probably the best wrestler in the brigade.

Perry recounted how Pomante&#8217;s high school coach, George Crooks, remembered him as a lanky kid who could put anyone in a cradle, a wrestling hold that often leads to a pin.

&#8220;Coach Crooks currently has an American flag patch and a dinar that Spc. Pomante sent him on display in his classroom,&#8221; Perry said.

Pomante, an artilleryman, was tasked with protecting Patriquin and others in his vehicle, &#8220;and he always did it very well,&#8221; Perry said.

&#8220;Both Capt. Patriquin and Spc. Pomante loved to live, but they did not hesitate to lay down their lives for their families, for their friends, or for their fellow soldiers,&#8221; Chaplain Stevan M. Horning, an Army major, said during the ceremony. &#8220;Yes, these soldiers were indeed far better men than their wicked enemies, who remain nameless.&#8221;