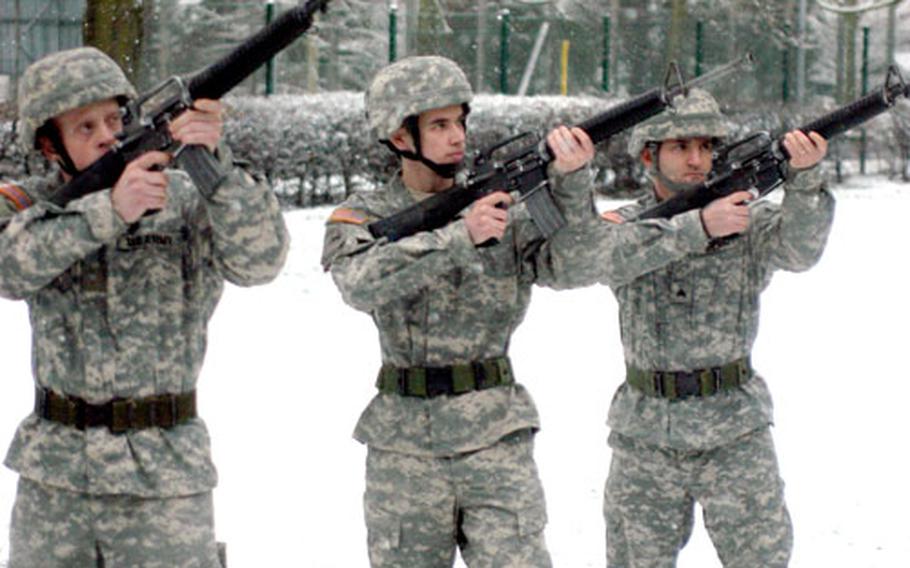 There is, after all, a little more work a soldier in Iraq needs to do inside the wire before his name lands on an Air Force manifest.

Spc. Alan Eugene McPeek&#8217;s thoughts must have turned &#8220;to home, to mom and dad, that special girl, to high-school friends,&#8221; Crawford continued. His audience listened intently as they sat before a large, framed photo of the 20-year-old soldier from Tucson, Ariz. A pair of desert boots, an M-16 rifle, a helmet, flowers, medals, unit coins and a thin cigar were among a host of items that adorned a platform next to the photo.

&#8220;Specialist McPeek certainly had some vision of what homecoming would be like,&#8221; Crawford said. &#8220;He would return with his unit to Germany, to march across the parade field, to receive recognition for accomplishments, individual and corporate. His dress uniform would display a little more &#8216;fruit salad&#8217; and a combat patch, but, more than that, he would be different.&#8221;

But things turned out differently for McPeek.

On Feb. 2, while training his replacement on the chaotic streets of Ramadi, shots rang out. McPeek was riding shotgun on the passenger side of their vehicle. His successor, Pvt. Matthew T. Zeimer, 18, of Glendive, Mont., was to his left.

Both were hit by small-arms fire. Both died. One was walking into something; the other was about to head for the exit &#8212; three wake-ups and a flight to Kuwait.

McPeek, who was with Company A, 16th Engineer Battalion, 1st Brigade Combat Team, 1st Armored Division, enlisted in the Army after high school in June 2004. He was still a couple of months shy of 18.

By all accounts, McPeek was an energetic, dependable, good man whose life ended far too soon.

&#8220;Specialist McPeek will not walk across the parade field,&#8221; Crawford said toward the end of his remarks. &#8220;He will not fall into the embrace of his parents. His homecoming is reserved for a more magnificent place.&#8221;

After the service, after the chapel had cleared out, Pvt. Jacob Quill and a few other soldiers remained behind to gather up the mementos. Quill, who served in another company, knew McPeek well.