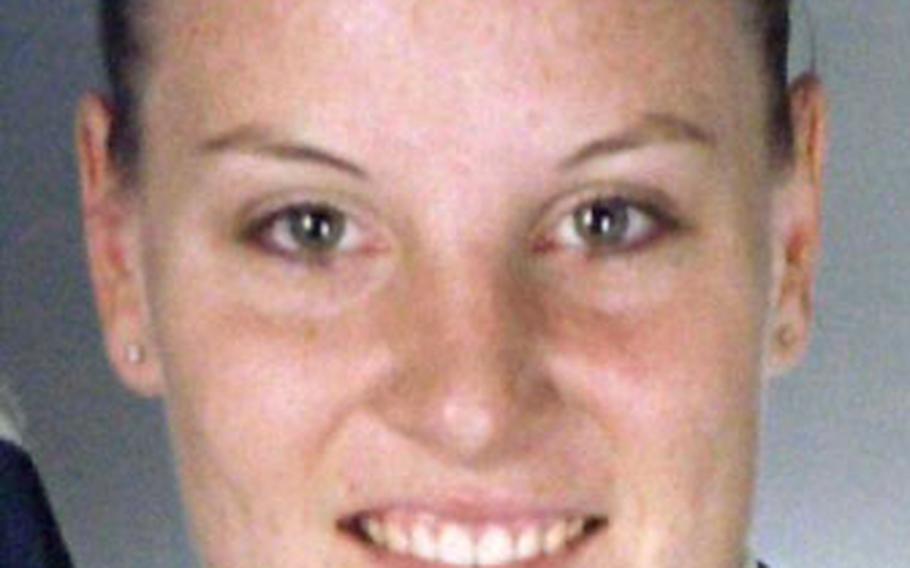 Lindsey Ferris, an agent with the Office of Special Investigations, died of a severe blood infection on Jan. 29. (Scott Schonauer / S&S)

Lindsey Ferris, an agent with the Office of Special Investigations, died of a severe blood infection on Jan. 29. (Scott Schonauer / S&S) SPANGDAHLEM AIR BASE, Germany &#8212; Early in her professional career, it appeared there was little Lindsey Ferris could not do.

After just two years as a federal agent with the Air Force&#8217;s Office of Special Investigations, she led a number of criminal investigations and earned the distinction as the Junior Civilian Special Agent of the Year.

&#8220;She was truly excellence personified,&#8221; said Lt. Col. Richard Reddecliff, commander of her OSI detachment at Spangdahlem Air Base.

Her future couldn&#8217;t have been brighter until a little over a week ago when she checked herself into the hospital. Within hours, the former All-American college gymnast died of a severe bacterial infection.

Agents with OSI Detachment 518 and members of the Spangdahlem Air Base community remembered Ferris during a memorial Monday at the base chapel.

Agents who attended described Ferris as a highly motivated, smart and energetic colleague who was passionate about her job.

&#8220;She brought laughter, compassion, dedication to our office and it&#8217;s a breath of fresh air to be able to work with somebody like that,&#8221; Special Agent James Ahlmann said.

She was the picture of perfect health and excelled in athletics before becoming a federal agent.

She attended George Washington University in Washington, D.C., where she was an All-American gymnast, and she spoke fluent French. She earned academic and fitness awards during her training to become an agent. Although she earned a master&#8217;s degree in forensic science, her commander said she enjoyed working counterintelligence operations to protect the base.

For her service, the Air Force posthumously awarded Ferris the outstanding career service award. Reddecliff read the citation aloud during the service in the packed chapel.

&#8220;She exhibited the highest in honesty, loyalty, reliability and was the picture of integrity,&#8221; said Reddecliff.

&#8220;She exhibited these core values every day and lived up to her oath of office and by doing so kept us safe.&#8221;

Ferris is one of three Americans in Germany to have died of meningococcal disease in less than a week. Army Pfc. Dave Robbins, who was stationed in W&#252;rzburg, and Kimberly Wesson, a military spouse from Schweinfurt, also died of similar infections but in apparently separate incidents.

A memorial service for Wesson is scheduled for 10 a.m. Wednesday at the chapel on Conn Barracks in Schweinfurt.

Wesson, the wife of Sgt. Greg Wesson, of the 1st Infantry Division, died Friday of what health officials suspect was meningitis, a form of meningococcal disease. Wesson, 23, worked as a cashier at the Schweinfurt commissary.

The store will be closed all day so her colleagues can attend the service, said Gerri Young, spokeswoman for the Defense Commissary Agency, Europe.

Stars and Stripes reporter Kevin Dougherty contributed to this report.