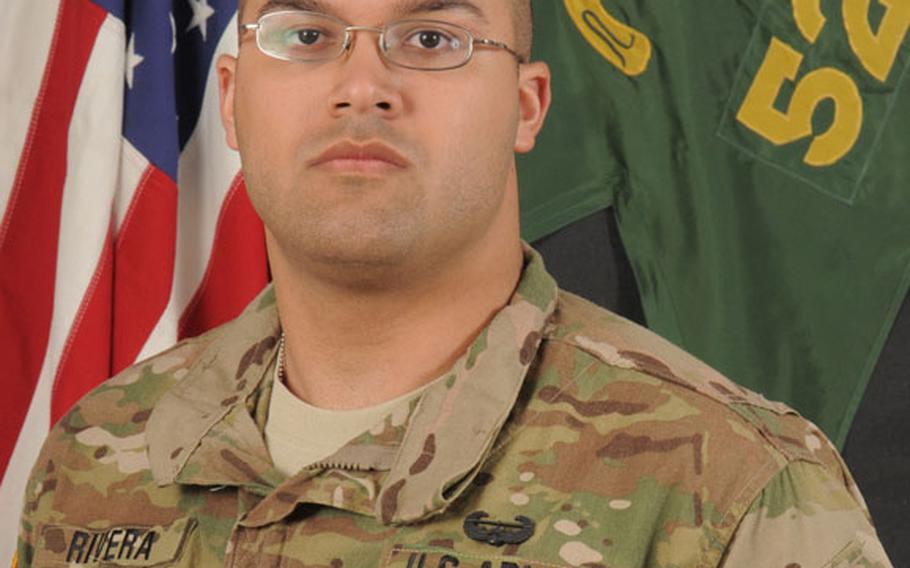 Cpl. Paul A. Rivera, 26, of the 527th Military Police Company, 709th Military Police Battalion, died in Afghanistan on Oct. 22, 2011, due to injuries from a vehicle rollover during an enemy attack in Logar province, according to the Department of Defense. (Courtesy of U.S. Army)

GRAFENW&Ouml;HR, Germany &mdash; A memorial service for a Germany-based military policeman killed in Afghanistan is scheduled for Friday at 11 a.m. in the Hohenfels theater.

Cpl. Paul A. Rivera, 26, of the 527th Military Police Company in Hohenfels, died Saturday in Logar province from injuries suffered in a vehicle rollover during an enemy attack, according to the Department of Defense.

Rivera, of Round Rock, Texas, was posthumously promoted to sergeant, according to a public affairs officer for the 21st Theater Sustainment Command.

Rivera joined the Army after his high school graduation in 2003, the Austin American-Statesman reported. The newspaper quoted a friend, a senior airman in the Air Force, as saying the two enlisted in the military in response to the 9/11 terrorist attacks of 2001.