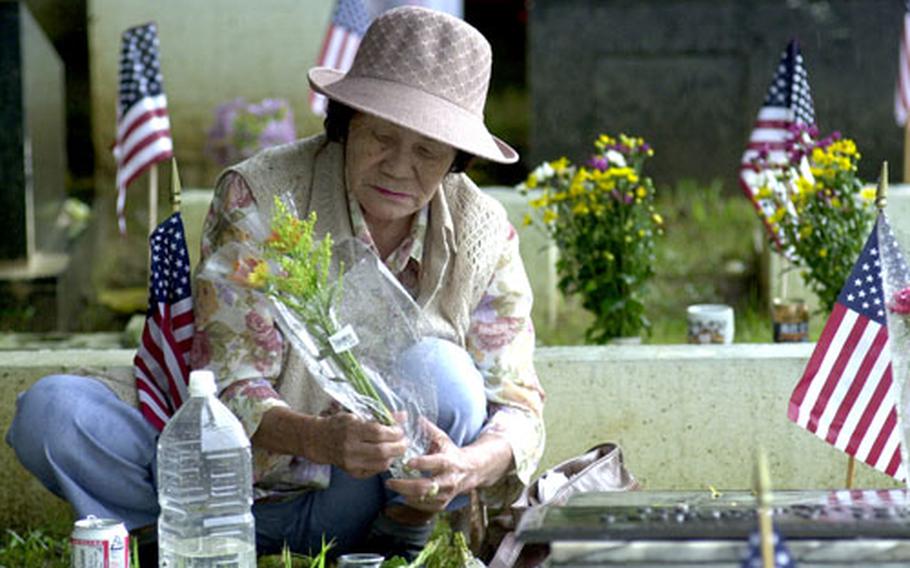 An Okinawan woman unwraps flowers to place at a tombstone before Memorial Day ceremony at the Naha International Cemetery near Tomari Port. (Fred Zimmerman / S&S)

An Okinawan woman unwraps flowers to place at a tombstone before Memorial Day ceremony at the Naha International Cemetery near Tomari Port. (Fred Zimmerman / S&S) 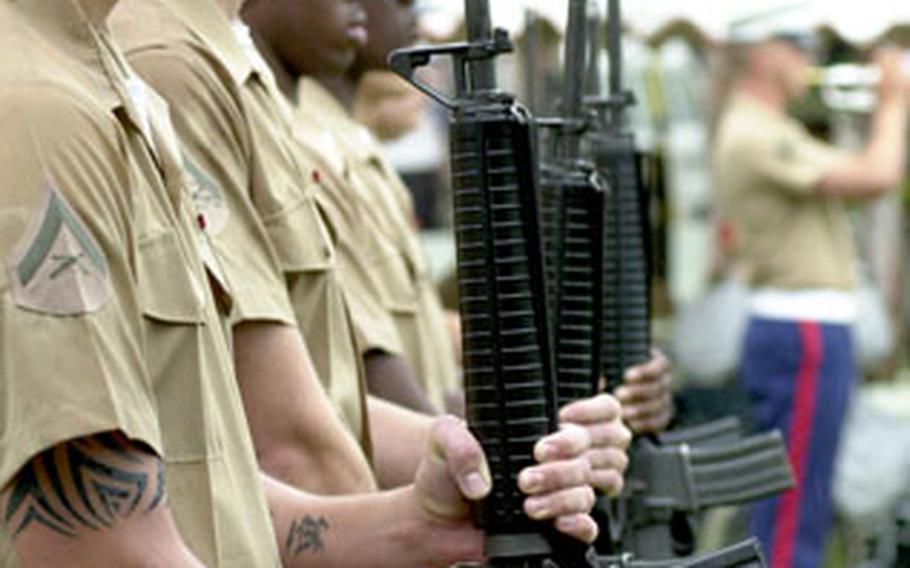 Marines present a rifle salute as Taps is played Monday during a Memorial Day ceremony at the Naha International Cemetery near Tomari Port. (Fred Zimmerman / S&S)

NAHA, Okinawa &#8212; Steady rain dropping from gray skies couldn&#8217;t keep a small crowd from gathering Monday at the Naha International Cemetery near the Tomari Port for a Memorial Day observance.

More than 200 people &#8212; active-duty servicemembers mixed with those formerly in the military and family members of some of those buried in the cemetery &#8212; gathered for the ceremony.

The event featured the 3rd Materiel Readiness Battalion Color Guard, the III Marine Expeditionary Force Band and a seven-man rifle squad from 3rd MRB that provided a 21-gun salute. Various organizations, including military, service and retiree groups, laid wreaths in honor of those buried there.

The cemetery was established in 1854 by U.S. Navy Commodore Matthew C. Perry during a trade mission with the then-Ryukyu Kingdom. Before Perry departed Okinawa, he signed a pact with the kingdom.

According to the ceremony&#8217;s program, one of the seven articles of the pact referred to the cemetery: &#8220;At [Tomari] is a burial ground for citizens of the United States where their graves and tombs shall not be molested.&#8221;

The cemetery contains more than 350 graves &#8212; 22 from before the pact &#8212; and include people from France, England and China as well as the United States. The cemetery was destroyed in 1945 during the Battle of Okinawa and was rebuilt 10 years later.

Most of the graves are those of U.S. servicemembers who married Okinawan women and stayed on the island with their families.

Before and after Monday&#8217;s ceremony, family members tended the graves of lost loved ones, including making offerings of water and beer and placing flowers.

&#8220;On this Memorial Day, in commemoration of those 61 years of peace, we pay homage to the thousands of combatants who gave their lives,&#8221; read the requiem in the program.

&#8220;But most especially, we pay homage to the more than 100,000 Okinawan citizens who died in the crossfire, as well as those U.S. servicemen who are buried in hallowed cemeteries throughout the world. May they rest in peace.&#8221;