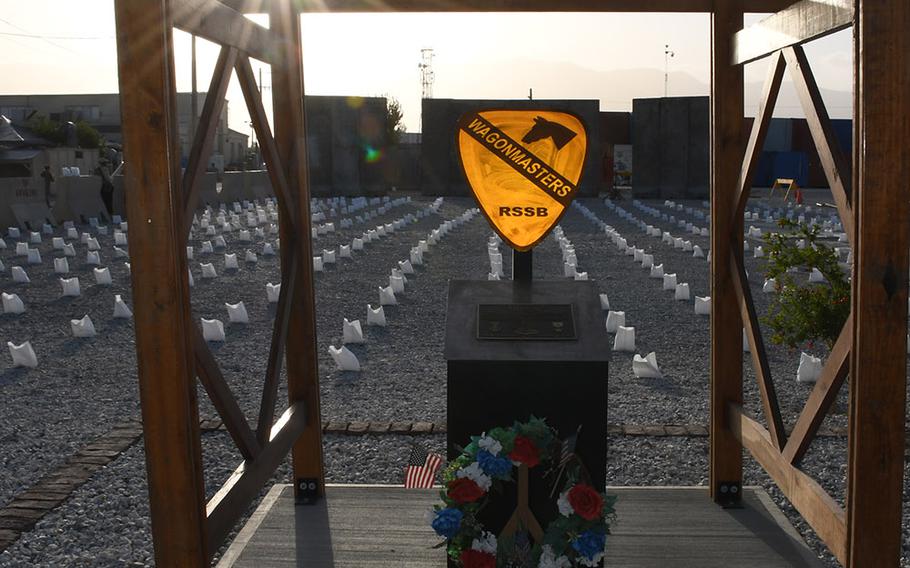 Pictured here on Memorial Day, Monday, May 28, 2018, is a memorial near the Bagram Air Field PX that marks the site of a November 2016 attack that killed five Americans and wounded 15 others the day after Veterans Day. (Chad Garland/Stars and Stripes)

Pictured here on Memorial Day, Monday, May 28, 2018, is a memorial near the Bagram Air Field PX that marks the site of a November 2016 attack that killed five Americans and wounded 15 others the day after Veterans Day. (Chad Garland/Stars and Stripes) 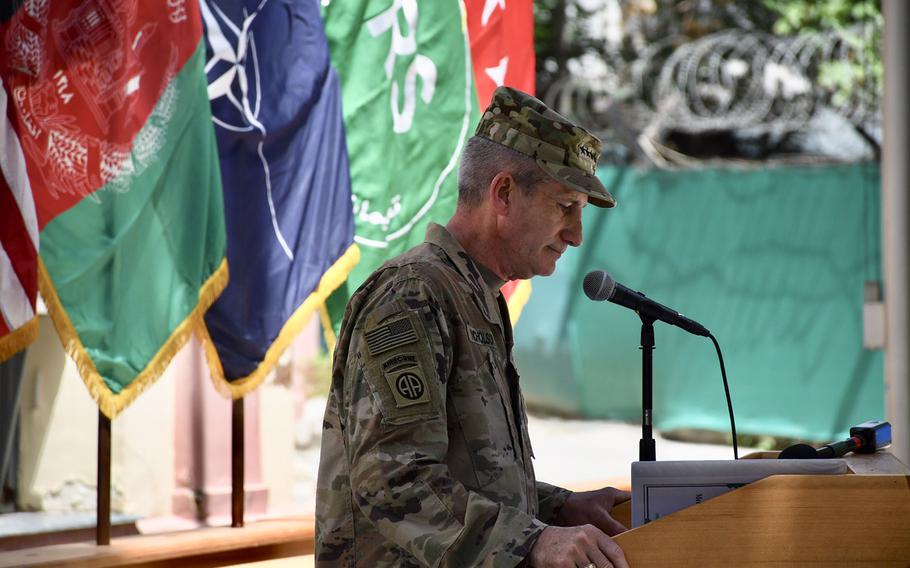 U.S. Army Gen. John Nicholson pauses to compose himself during a moving Memorial Day speech at Resolute Support headquarters in Kabul, Afghanistan, on Monday, May 28, 2018. (Chad Garland/Stars and Stripes) 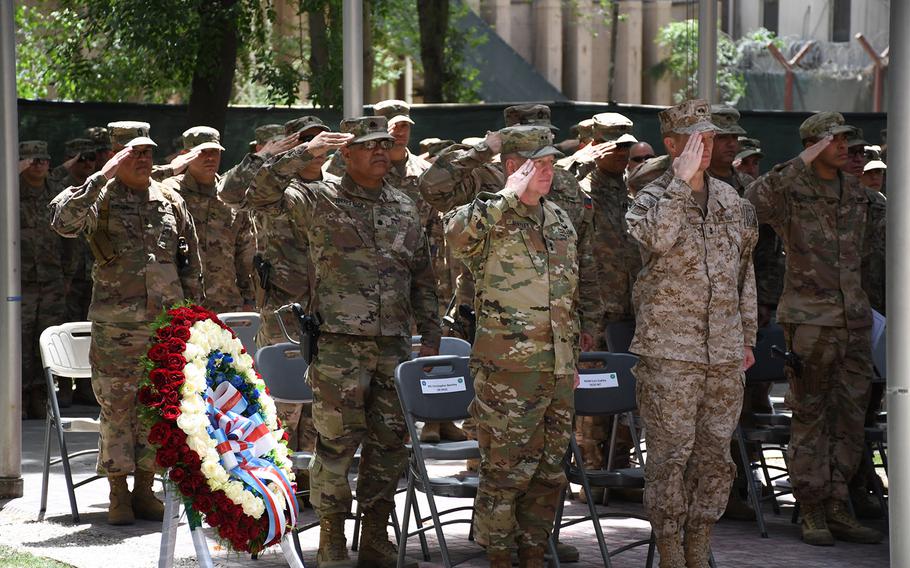 Troops salute during a Memorial Day ceremony at Resolute Support headquarters in Kabul, Afghanistan, on Monday, May 28, 2018. (Chad Garland/Stars and Stripes) 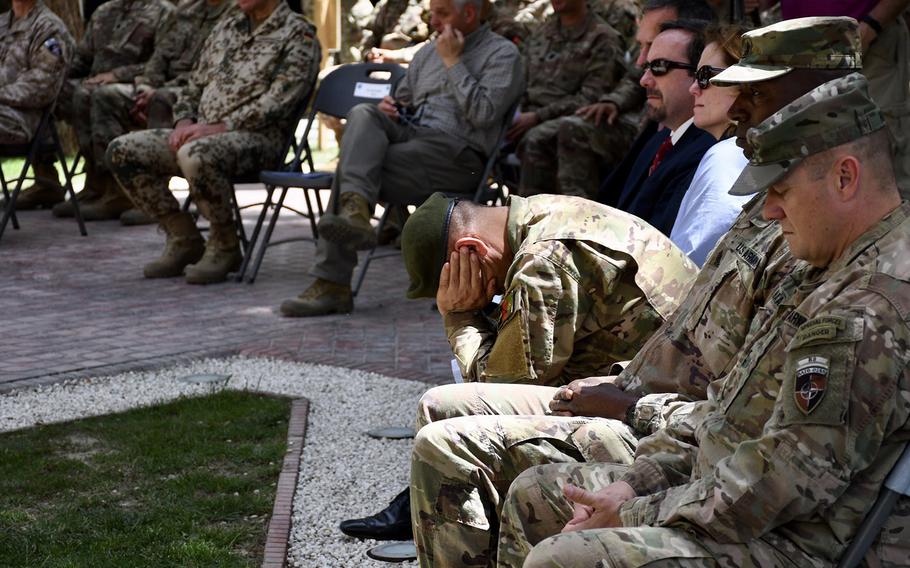 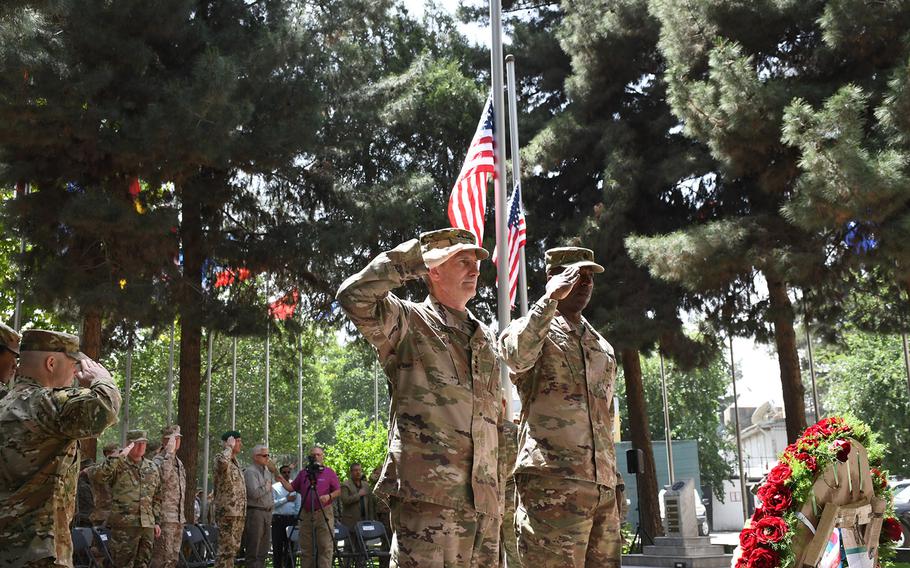 Gen. John Nicholson, commander of the U.S.-led NATO mission in Afghanistan, and Command Sgt. Major David Clark, his senior enlisted advisor, salute during the playing of taps after placing a Memorial Day wreath in front of a monument at NATO’s Resolute Support mission headquarters in Kabul, Afghanistan, on Monday, May 28, 2018. (Chad Garland/Stars and Stripes) 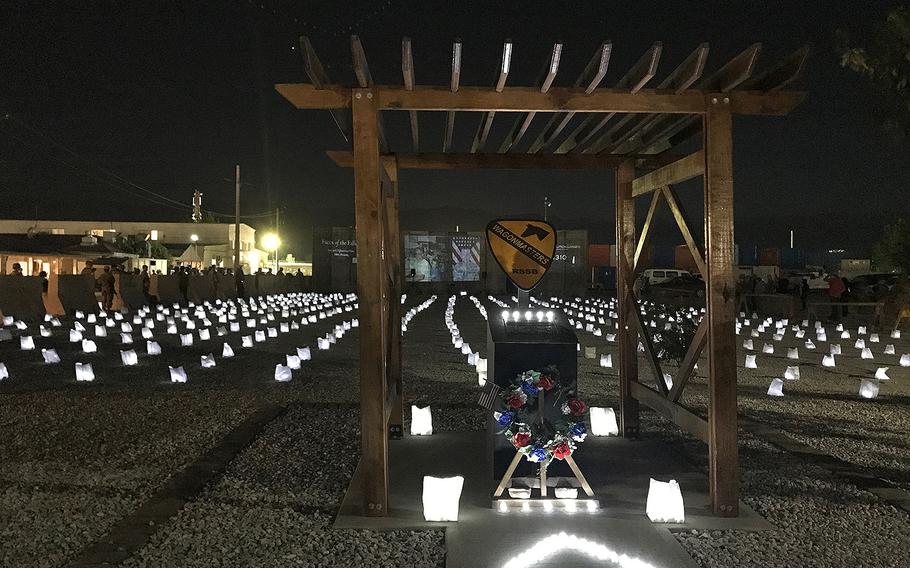 A monument near the Bagram Air Field PX, which marks the site of a November 2016 attack that killed five Americans and wounded 15 others the day after Veterans Day, was part of a nighttime Memorial Day display organized by the USO and other base support units, to honor Americans and their allies who died in the wars since 2001. Photographed on Monday, May 28, 2018. (Chad Garland/Stars and Stripes) 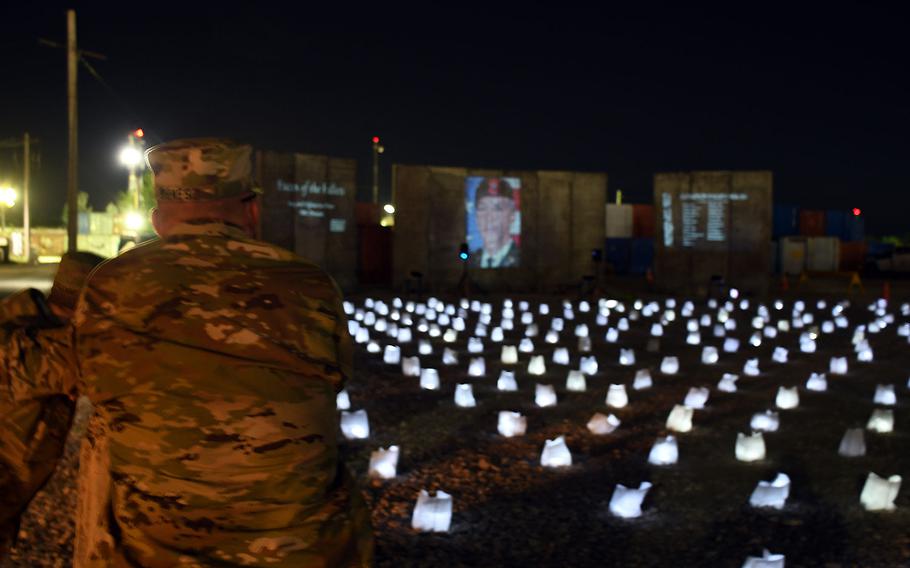 A soldier views a Memorial Day display called “Faces of the Fallen,” which featured hundreds of luminaries and a slideshow of images, videos and names of U.S. servicemembers who have died in America’s wars since 2001. The temporary monument was near the Bagram Air Field PX and the site of a November 2016 attack that killed five Americans and wounded 15 others the day after Veterans Day. Photographed on Monday, May 28, 2018. (Chad Garland/Stars and Stripes) 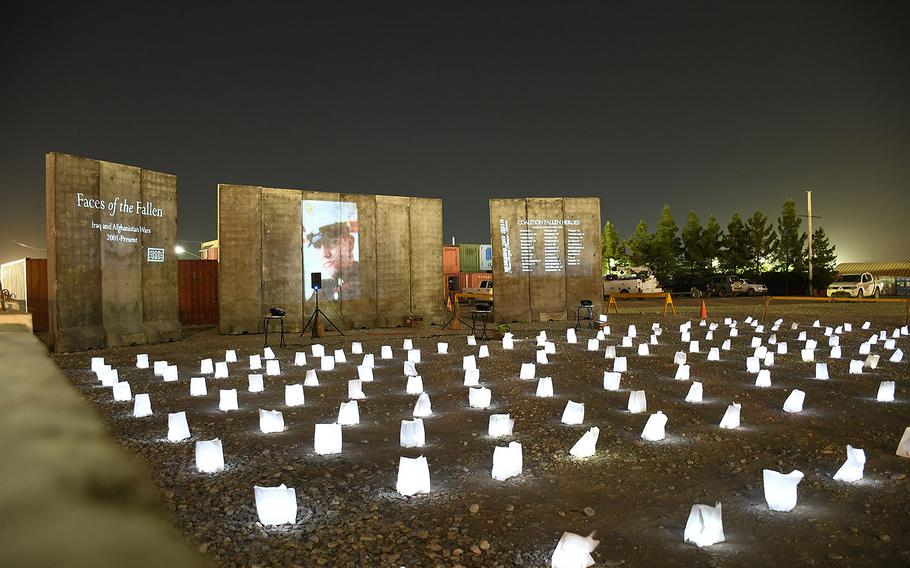 A field of 500 luminary lights and a display of images, names and videos of the U.S. troops who have died in America’s post-9/11 wars was set up on Memorial Day, Monday, May 28, 2018, at a site near the Bagram Air Field PX in Afghanistan. (Chad Garland/Stars and Stripes)

BAGRAM AIR FIELD, Afghanistan — A field of lights and a display of names and photos projected on a blast wall here Monday night paid tribute to more than 8,000 Americans and their allies who’ve died as part of the United States’ wars since 2001.

Earlier in the day, Gen. John Nicholson, the top U.S. commander in the country, gave a moving speech before a gathering of U.S. troops and diplomats and their allies at the NATO mission’s headquarters in Kabul.

“We remember all of the American soldiers, sailors, airmen, Marines killed in Afghanistan. I specifically want to highlight 22-year-old Spc. Gabriel Conde who was the latest American servicemember killed in action on 30 April,” Nicholson said. “Our duty...is to remember them, say their names, tell their stories, ensure that we never, never forget them.”

His voice broke several times during his speech, and he was forced to pause to compose himself while telling their stories, such as his memory of meeting Davis’s mother at her son’s graveside in Arlington Cemetery’s section 60.

Nicholson had gone there in 2007 to visit Fenty’s grave, but stopped to pray at each of the graves of ten soldiers who’d served under him as he passed them, before coming to Davis’s headstone, where a blanket was spread in front of it. The 19-year-old soldier’s mother approached as Nicholson prayed.

“I said to her, ‘I was your son’s commander and I’m so sorry I didn’t bring him home to you,’” he said, before pausing for several seconds and clearing his throat. “She reached out and hugged me and she comforted me when of course it should have been me comforting her.”

Nicholson also discussed the “survivor’s guilt” that sometimes plagues troops when their comrades are killed, suggesting that the way to deal with those feelings is in part to respect the servicemembers’ choice to serve and to keep their memories alive so that they may draw strength from their inspiration.

As night fell on Bagram, dozens of troops stood alongside concrete barriers, holding miniature American flags and watching the display, titled “Faces of the Fallen,” which projected the names and images of the 7,000 U.S. troops killed in the country’s recent wars, as well as details about the 1,300 coalition troops also killed. Short video clips played of families talking about their fallen loved ones, while organizers quietly voiced hopes that rebels would not fire rockets on the base, as frequently happens at night here.

The spot selected for the temporary Memorial Day monument was a large, dusty lot next to the PX, that was the site of a deadly November 2016 suicide bombing that killed five Americans and injured 15 others, the first such attack to take place inside the base’s gates. A permanent memorial bearing the names of the dead was built last May at the site of that attack, which triggered heightened security on base and left some residents shaken at America’s largest military compound in the country.

Tiffany Banks, center director for the USO here, said the Memorial Day event was the first of its kind at Bagram, but was inspired by a similar Nightfall 5K and Vigil that the USO has held at Camp Buehring, Kuwait since Memorial Day in 2012.

That event featured nearly 7,000 luminaries to honor each of the fallen servicemembers in the wars in Iraq and Afghanistan. A flyover in a missing-man formation, a convoy of armored vehicles and 1,600 runners who participated represented the troops who had died in the air and on the ground during the conflicts, Banks said.

Col. James Ellerson, commander of the Area Support Group for Afghanistan, said Memorial Day observances while deployed vary from small group ceremonies to larger events, but he praised Banks for organizing the informal Bagram vigil that was slated to last until midnight, with 500 luminaries to remain lit overnight.

“When we do something like this in this environment, it makes it even more special,” he said, calling the event a “great reminder of why we’re here and what we’ve committed to.”

The USO wanted the Bagram display to honor the troops specifically in the Afghanistan War, including the namesakes of various parts of the base, such as Pat Tillman, for whom the main USO facility here is named, Banks said. Tillman, an NFL player who became an Army Ranger after the Sept. 11, 2001 terrorist attacks, was killed by friendly fire during a firefight near the Pakistan border in April 2004.

The site of the display was just off the base’s main road, named for Spc. Jason A. Disney, a soldier killed in an accident on the base in February 2002. Not far away was the Air Force’s Camp Cunningham, named for Senior Airman Jason D. Cunningham, a pararescueman who died treating nearly a dozen wounded on the battlefield during the Battle of Robert’s Ridge in March 2002. Further up the road was Staff Sgt. Heathe N. Craig Joint Theater Hospital, named in honor of a soldier who died while on a medevac mission during combat operations in June 2006.

Nicholson said the Americans, their allies and the Afghan forces who have died in the U.S.’s longest war have all helped bring the conflict to the “unprecedented time that we are now in,” with peace offers on the table, widespread Afghan calls for an end to the conflict and international support for the peace process.

Despite the latest efforts to coax the Taliban to the peace table, the group shows no sign of ending their insurgency against the Kabul government and has promised to step-up attacks on the Americans and their allies, especially in the Afghan capital.