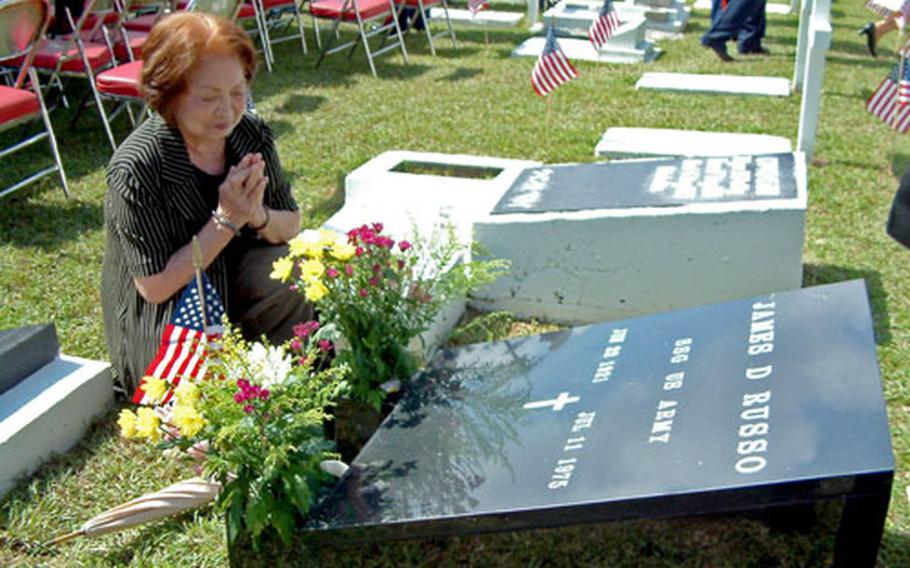 Keiko Russo, 77, of Itoman, prays at the foot of the gravestone of her husband, a retired Army sergeant who died in 1975. (David Allen / S&S)

Keiko Russo, 77, of Itoman, prays at the foot of the gravestone of her husband, a retired Army sergeant who died in 1975. (David Allen / S&S) 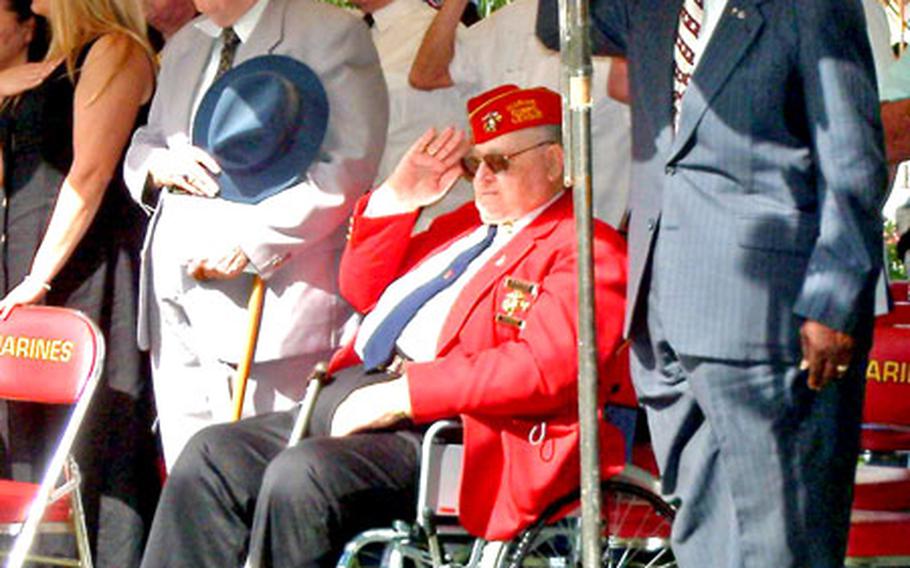 Veterans (right to left) Larry Alsap, William Killian and Harry Thomas, members of VFW posts on Okinawa, pause for the national anthems of the United States and Japan Sunday during the ceremony. (David Allen / S&S) 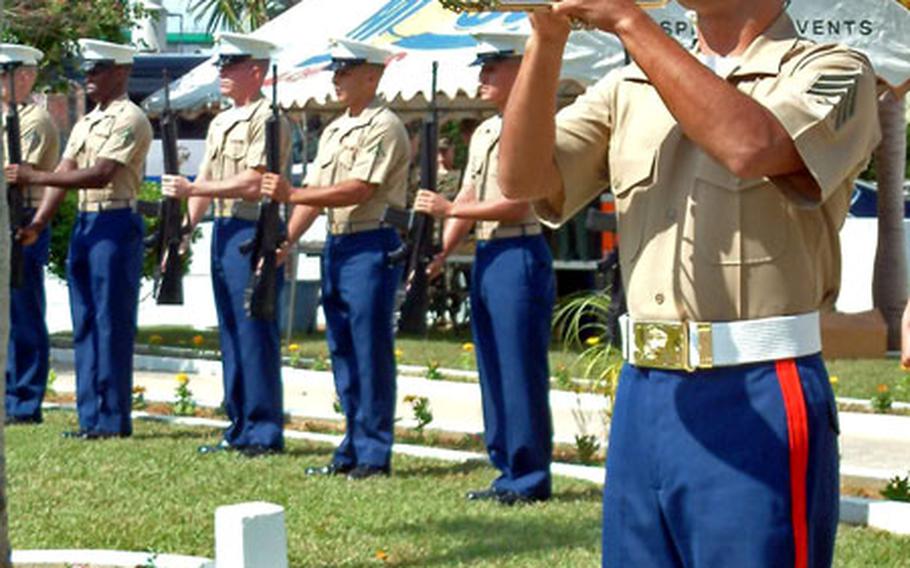 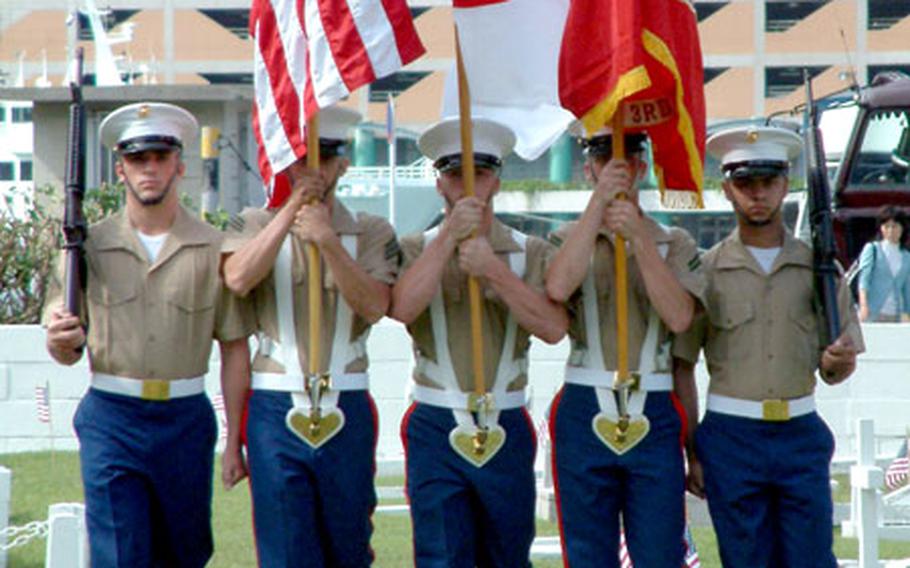 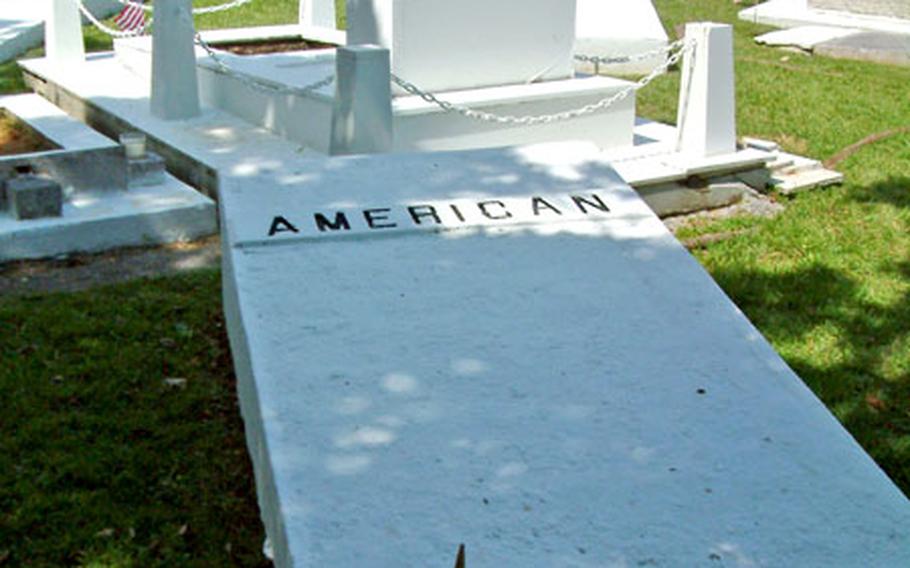 An unknown American is buried in one of the 300 graves at the International Cemtery in Naha, Okinawa. (David Allen / S&S)

Afterward, many family members tended to the graves of the U.S. veterans buried in a small, walled-off block just across the street from the Tomari Port. The cemetery was established formally in 1854 by U.S. Navy Commodore Matthew C. Perry during his trade mission to what then was known as the Kingdom of the Ryukyus.

Most of the graves are those of U.S. servicemen who married Okinawa woman and stayed on Okinawa to raise their families.

Panter said Memorial Day was a time to &#8220;remember the people who have gone before us and to pay respect to the U.S. citizens buried here.&#8221;

McInerney, a former Air Force officer, said the cemetery is a &#8220;living connection to America and those who have helped defend it.&#8221;

&#8220;To the American fighting men and women around the world who gave their lives for our country we pay our respects,&#8221; McInerney said, making a point to mention the 31st Marine Expeditionary Unit&#8217;s recent return to Okinawa from duty in Iraq.

Besides veterans and current servicemembers, also remembered in the program were others who died during World War II, including Okinawan victims of the Battle of Okinawa.

&#8220;Sixty years have passed and on this Memorial Day, in commemoration of those sixty years of peace, we pay homage to the thousands of combatants who gave their lives,&#8221; stated the requiem in the ceremony&#8217;s program. &#8220;But most especially, we pay homage to more than one hundred thousand Okinawan citizens who died in the crossfire, as well as those servicemen who are buried &#8230; throughout the world.&#8221;

After the ceremony, several families gathered at graves of the U.S. veterans and placed flowers and the traditional Okinawan offering of sake and beer at the foot of the headstones.