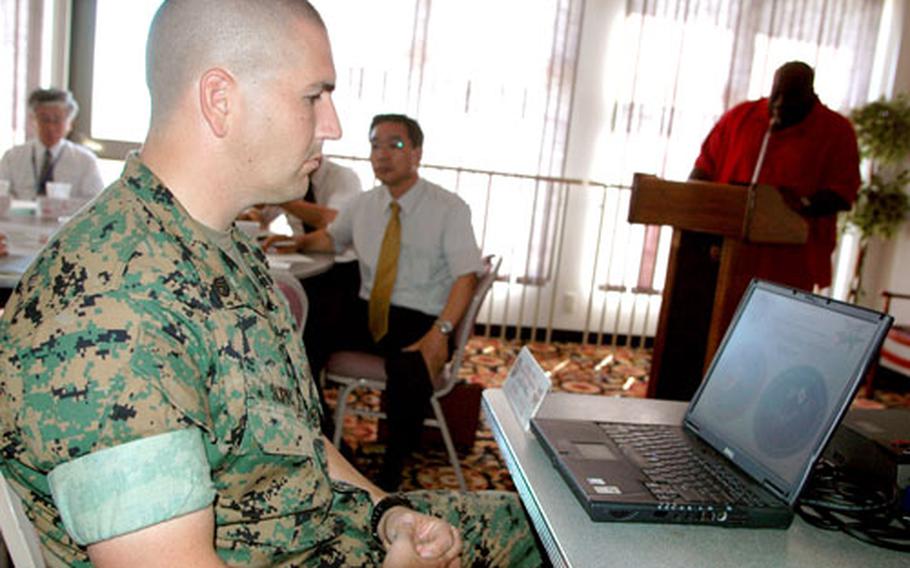 MARINE CORPS AIR STATION IWAKUNI, Japan &#8212; You may not recognize them &#8212;- and some might not even recognize each other &#8212;- but there&#8217;s no doubt a collection of U.S. and Japanese teams are out there with their eyes peeled for terrorist activity.

Once in a while they get together, as they did here Wednesday when members of the Bilateral Antiterrorism Base Cluster 4 Team met, some talking face-to-face for the first time even though they routinely communicate via e-mail and phone.

Keeping each other informed is paramount because &#8220;the nature of the beast&#8221; is that &#8220;duty and responsibility descriptions can never be public,&#8221; said Andrew Samuels, Iwakuni officer for anti-terrorism and force protection.

The Cluster 4 Team, covering much of southwestern Honshu, Japan&#8217;s main island, is among several in the country serving as a network to collect and share information on suspected threats and other security issues.

Earlier this year, Samuels received honorable mention from the Pentagon as an anti-terrorism program manager.

&#8220;Together, we work to protect our critical resources and personnel in our area of responsibility,&#8221; he said. &#8220;Our bilateral, ongoing fight in the global war on terrorism involves extremely sensitive information.&#8221;

He called matching faces to names &#8220;extremely important &#8230; especially because we work closely with Japanese agencies. The more time you can invest to build relationships &#8230; the better.&#8221;

The 15 agencies in the team have varying responsibilities. But, Samuels said, &#8220;One of those applies to everyone, which is sharing information about conditions and individuals possibly posing a threat that could lead to a security breach.&#8221;

For instance, an Iwakuni city police officer might observe someone closely monitoring the installation and inform the base.

&#8220;If Japan Customs noted a series of packages or letters destined for military base addresses originating from countries identified with international goals contrary to ours,&#8221; appropriate Cluster Team officials would be notified to investigate, he said.

The Cluster 4 Team also went into action to safeguard more than 220,000 visitors in May at Iwakuni&#8217;s Friendship Day. In addition, the team keeps constant watch against waterborne security threats by using joint boat patrols with Japan&#8217;s Coast Guard and Iwakuni&#8217;s police.

No one agency can do it all, Samuels said.