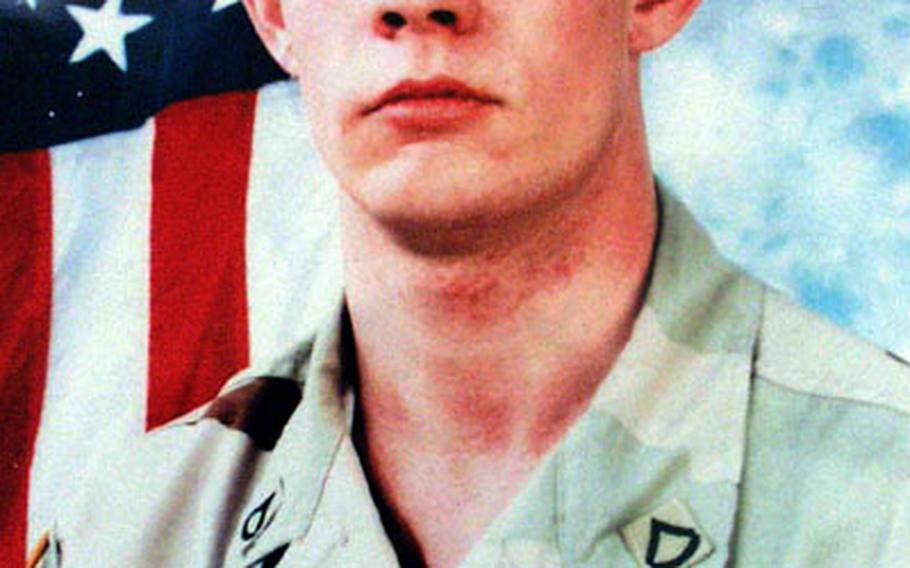 SCHWEINFURT, Germany &#8212; Pfc. Owen Witt&#8217;s Army portrait stared sternly from above his boots and below his helmet at the hundred or so friends and soldiers from the 1st Squadron, 4th Cavalry Regiment who gathered Wednesday to mourn him.

&#8220;Our little brother Witt always had a story for us; he always made us laugh,&#8221; said Sgt. 1st Class John Orbe, who served in Iraq with Witt, in comments read at the service. &#8220;His stories were like folklore and spread throughout the troop. They would always bring a smile to your lips.&#8221;

Witt, 20, died May 24 when a Humvee atop which he was riding as the gunner rolled over into a ditch in Iraq.

Witt grew up near Sand Springs, Mont., attending a one-room school just down the road from his family&#8217;s cattle ranch. He loved singing country music and painting, his family wrote in a message to his unit.

Just two months after his high school graduation, Witt joined the Army with his best friend, Spc. Kevin Rogge. Together they attended basic training at Fort Knox, Ky., and were assigned as tankers to the 1/4 Cavalry in Schweinfurt.

In February, his unit deployed to Iraq. Witt told his family he was nervous about going.

Rogge spoke fondly of his longtime friend in a tribute read at Wednesday&#8217;s service.

Witt is survived by his parents, David and Karen Witt, and his three brothers, Cody, Kelly and Troy. He was posthumously awarded the Bronze Star medal.

The latest death stung the military community in Schweinfurt, home of the 1st Infantry Division&#8217;s 2nd Brigade Combat team. Sixteen of its soldiers have died since the division deployed to Iraq almost four months ago.