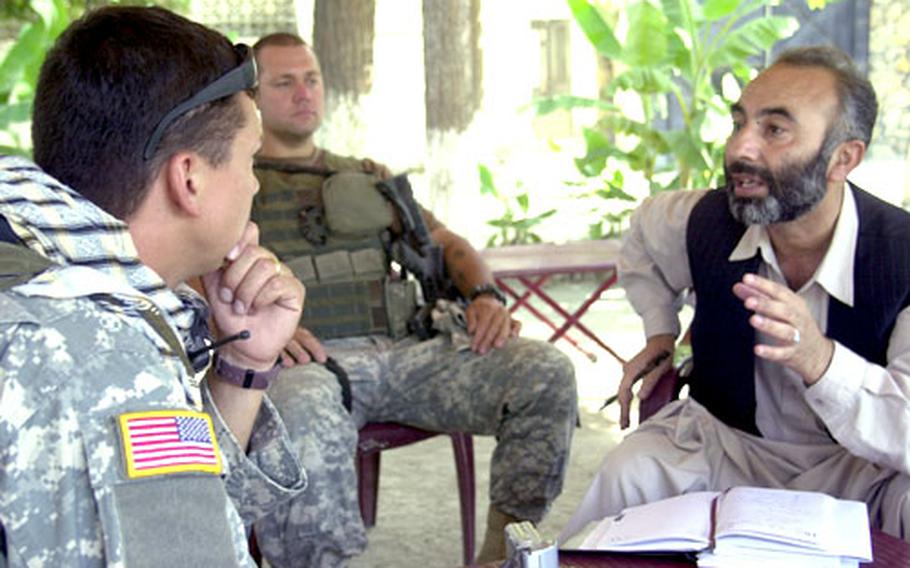 Staff Sgt. Robert Dasher of the U.S. Army Reserves, left, talks with Noories Wodolluh, Laghman province&#39;s director of public health, at a recent meeting. Wodolluh was asking that a 200-bed hospital be built near Mehtar Lam, the Laghman province capital. Dasher, who is attached to the Mehtar Lam provincial reconstruction team, told Wodolluh to submit a plan for the project. (Steve Mraz / S&S)

The civil affairs soldier attached to the Mehtar Lam provincial reconstruction team listens to Laghman officials rattle off projects that they would like to see funded by the U.S.

This day, Noories Wodolluh, provincial director of public health, asks for a 200-bed hospital, a building for public health officials and a vaccination center with refrigerated storage.

Wodolluh believes it would cost about $225,000 for a 100-bed hospital and roughly $75,000 for a public health building. Dasher suggests instead of building a separate vaccination facility, that space for a vaccination area be added to plans for a hospital.

Before wrapping up, Dasher tells Wodolluh that he needs to draft plans and get them to Forward Operating Base Mehtar Lam so the proper paperwork can be submitted on the request.

And since its formation this March, the Mehtar Lam provincial reconstruction team has been doing what it can to make the residents of Laghman province happy.

The PRT has funded the construction of five police substations &#8212; at $17,000 each &#8212; around the city of Mehtar Lam, given out hundreds of hand-crank radios, provided food and supplies for an orphanage, and supplied Afghan police with 350 AK-47s and ammunition, just to name a few of the areas where funds were used. Also in the works are micro-hydroelectric dams and a $150,000 orphanage that would house 250 orphans.

It has gotten to the point where military convoys cannot drive through the province without being hounded by locals for more radios. The team also funds infrastructure projects for roads, water purification systems, culverts and so on. The group is looking to get funding for a study on constructing a hydroelectric dam in the province.

Simply put, the Mehtar Lam provincial reconstruction team is tasked with funding projects that will go toward rebuilding this eastern Afghanistan province.

&#8220;It&#8217;s a methodology for funding Afghan contractors,&#8221; said Navy Cmdr. Frank Gutierrez, commander of Mehtar Lam provincial reconstruction team. &#8220;We work with the governor, who voices the priorities, and we try to get those priorities funded.&#8221;

Once a project is deemed worth funding, the Mehtar Lam PRT pushes it up its chain of command, beginning with Afghanistan Regional Command-East for approval. Depending on the size and scope of the project, approval could come from as high as U.S. Central Command.

The Mehtar Lam provincial reconstruction team is one of 20 PRTs around Afghanistan. The PRTs are operated by U.S., coalition and NATO forces.

All the teams are working toward the same goal of improving Afghanistan to show its populace the benefits of government.

An added hope is that by these good works, Afghan children won&#8217;t grow up to be rebels, and the country can live in peace following a quarter century of war.

&#8220;It&#8217;s paramount to legitimize the central government of Afghanistan, and through these projects, we are legitimizing the government&#8217;s worth to the people.&#8221;

Permanent buildings going up on base

MEHTAR LAM, Afghanistan &#8212; Although most of the structures on Forward Operating Base/ Provincial Reconstruction Team Mehtar Lam are tents or plywood structures, work is under way on more permanent facilities.

Construction should be completed by the middle of next year. When U.S. forces leave Afghanistan, plans are to turn over the buildings so Afghans can perform the job of providing security for their own country.