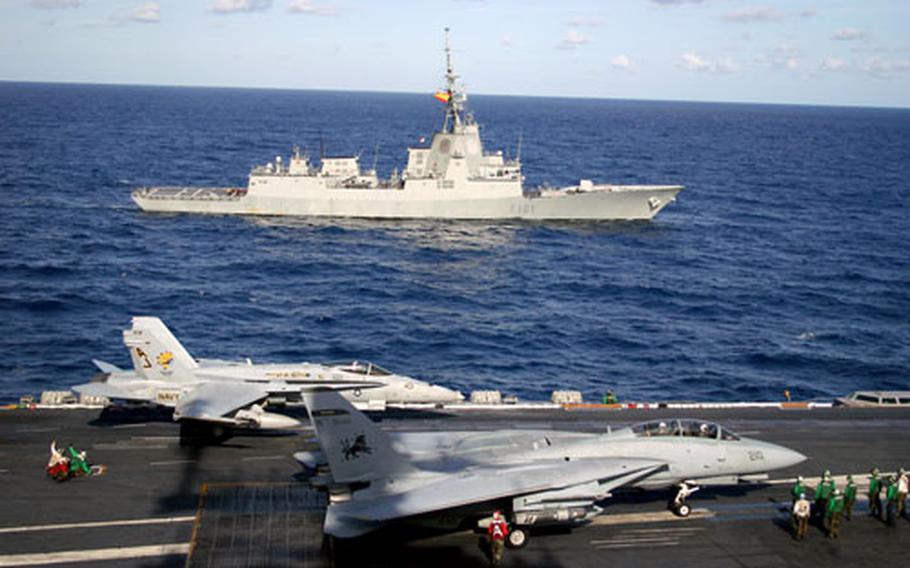 An F-14 Tomcat, foreground, and an F/A-18 Hornet prepare to launch from the deck of the aircraft carrier USS Theodore Roosevelt on Sunday. In the background is the Spanish frigate Alvaro de Bazan, sailing as part of Carrier Strike Group 2 toward the Persian Gulf. (Sandra Jontz / S&S)

An F-14 Tomcat, foreground, and an F/A-18 Hornet prepare to launch from the deck of the aircraft carrier USS Theodore Roosevelt on Sunday. In the background is the Spanish frigate Alvaro de Bazan, sailing as part of Carrier Strike Group 2 toward the Persian Gulf. (Sandra Jontz / S&S) 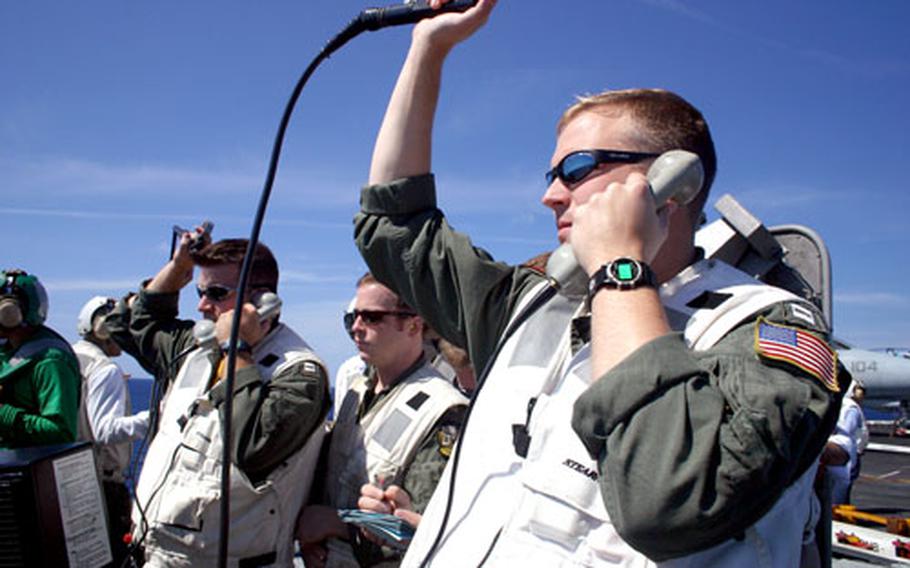 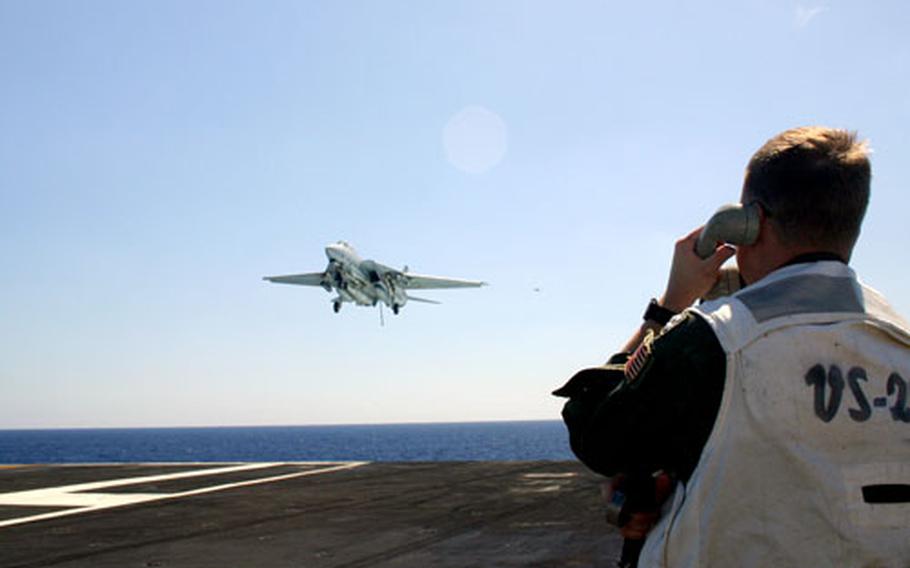 A landing signal officer on Saturday stands mere feet off the flight deck as he talks to a pilot of an F/A-18 Hornet fighter jet prepping to land aboard the aircraft carrier USS Theodore Roosevelt. (Sandra Jontz / S&S)

ABOARD THE USS THEODORE ROOSEVELT &#8212; Sailors from the USS Theodore Roosevelt got the call to war a week earlier than anticipated.

Ordinarily, losing seven planning days to get eight ships and about 7,500 sailors under way would have been a huge deal, said Rear Adm. James Winnefeld Jr., commander of Carrier Strike Group 2.

But the first 11 days into the Theodore Roosevelt&#8217;s ninth deployment were marked by smooth sailing as the group transited the Mediterranean Sea, Winnefeld said.

The nuclear-powered aircraft carrier and its strike group, mostly from Norfolk, Va., set sail Sept. 1 for a roughly six-month deployment to the Persian Gulf to support the wars in Iraq and Afghanistan.

The Roosevelt strike group, set to replace the USS Nimitz, won&#8217;t be in the gulf in time for this Sunday&#8217;s parliamentary and provincial council elections in Afghanistan. But it will be there for the Oct. 15 Iraqi constitution referendum, and the Dec. 15 Iraqi general elections &#8212; events which U.S. officials say will likely increase insurgent violence.

But that&#8217;s a few weeks off for the Roosevelt and its crew.

&#8220;We have been pretty blessed thus far,&#8221; Winnefeld said of successes such as early deployment and staying just ahead of the menacing winds and storms of Hurricane Maria.

A &#8216;refreshing&#8217; changeAlso, in a first for the U.S. Navy, the Spanish frigate Alvaro de Bazan joined U.S. ships three months ago for the predeployment exercises called &#8220;work-ups&#8221; to qualify for operations. Though classified as a frigate, the Bazan mirrors a U.S. destroyer and can provide capabilities such as air defense, officials said.

The lifestyle aboard the Bazan differs starkly from that aboard U.S. vessels, said two of the five U.S. sailors assigned to sail aboard the frigate. Sleeping areas for enlisted sailors, for example, accommodate six sailors per stateroom, versus berthing for about 50 sailors on a U.S. vessel, said Ensign Joseph Erskine, 35, the communications officer liaison.

&#8220;They provide a better quality of life, which is something that is very important to them,&#8221; he said. Passageways are larger, each stateroom has its own bathroom, and the food is tastier.

And much of the Bazan is fully automated, Erksine said, and fewer sailors are required to run the ship.

The cultural differences &#8220;are quite refreshing,&#8221; said Petty Officer 2nd Class Lisa Moise, one of 30 females aboard the ship of 260 sailors.

Also on this cruise, the two last active squadrons of F-14 Tomcats fighters are making their final deployment. The Tomcat, a bastion of naval aviation might, will be retired when the squadrons return to the United States in the spring.

Little is as impressive as watching the precise, choreographed dance of fighter jet after fighter jet being slung-shot off the tip of the carrier, said Spanish Rear Adm. Ricardo Gomez, commanding officer of Naval Station Rota, Spain, a Spanish-owned base from which the U.S. Navy operates.