Medics train for evacuation by helicopter 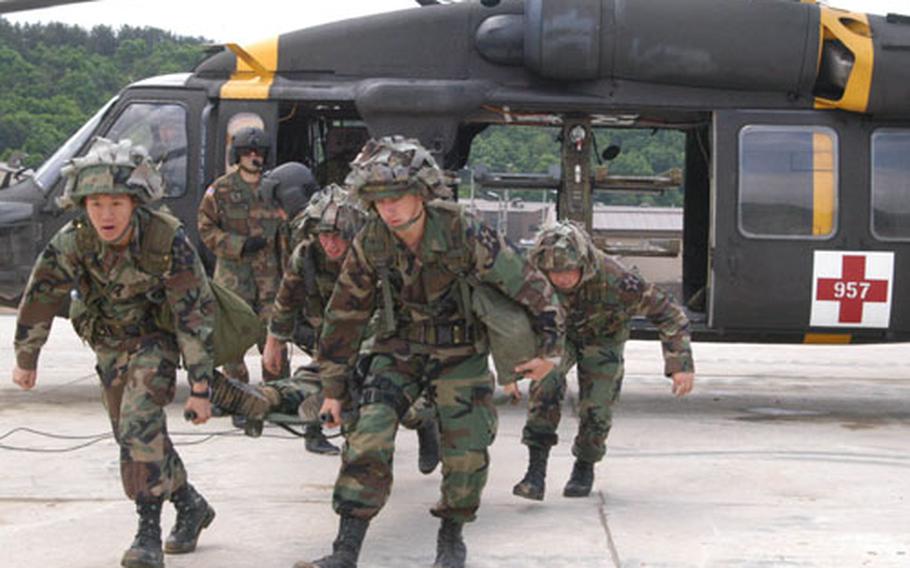 RODRIGUEZ RANGE, South Korea &#8212; Air evacuation of wounded soldiers will be a vital tool should conflict break out on the rugged and traffic-clogged Korean Peninsula, say medics and aircrew personnel training together at Rodriguez Range.

During a force-on-force training battle involving soldiers from 2-9&#8217;s Company D, the medics had the option to evacuate serious casualties in the Black Hawk, one of three that would be allocated to them in time of war.

Before the battle started, the medics trained with the helicopter crew, learning the Black Hawk&#8217;s configuration, the correct way to approach the aircraft, and how to load and unload patients.

Sgt. Robert Nickison, a medic with the 542nd, told infantry medics to always approach the aircraft from the side. The aircraft&#8217;s rotor tilts down at the front and might decapitate a person approaching from that direction, he said.

The 542nd Black Hawk was configured for evacuations and included a six-stretcher carousel. Nickison showed the medics the correct way to load patients, with the most serious casualties being the easiest to access.

The medics practiced the loading and unloading procedures with the rotor turning to give them the sense of what it is like to work in such a noisy environment.

Sgt. Jeremy Mondick, a Black Hawk crew chief, said evacuations would be vital in any conflict on the Korean Peninsula.

&#8220;If you have ever ridden the bus in South Korea, you know it takes two hours to get anywhere by ground, whereas it will take us half an hour or less to get a patient to the [121st General Hospital at Yongsan] Garrison by air,&#8221; he said.

&#8220;We can handle 10 to 20 patients. When it gets over that, it becomes a mass casualty. At that time, we can [use medevac to] send them back,&#8221; he said over the noise of a Bradley machine gun rattling away on the battlefield.

Soon, Company D&#8217;s simulated casualties started to flow in to the aid station where medics treated them based on the severity of their injuries &#8212; indicated on cards the &#8220;wounded&#8221; soldiers carried.

Soldiers with &#8220;minimal&#8221; wounds such as lacerations and sprains were left to one side. Parker said they could be sent back into battle if things went badly in the field.

&#8220;Somebody with a severely sprained ankle would be taken out &#8230; in training, but in battle he might go back in. Someone with a laceration we might be able to send back in with stitches,&#8221; he said.

&#8220;In triage, the ones expected to die are treated last,&#8221; Parker explained. &#8220;For example, a soldier with both legs amputated who has lost a lot of blood is probably going to die. If he is the only guy, we are going to treat him, but if there are five, we will try to stabilize the other four, then start on him.&#8221;

&#8220;Delayed&#8221; cases, soldiers with injuries such as fractures, were also set aside. Priority was given to &#8220;immediate&#8221; cases where soldiers&#8217; injuries threatened life, limb or eyesight. These casualties were stabilized, then loaded into an ambulance and taken to the Black Hawk.

Medics in the field need to be familiar with finding landing zones for helicopters, Parker said.