Medics prepare for it all — including delivering babies 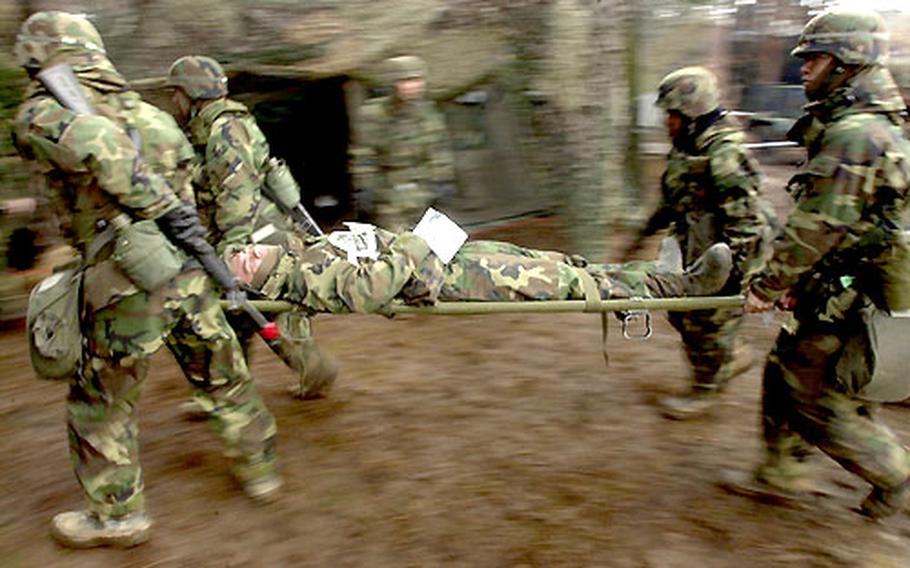 A simulated casualty is rushed toward a field treatment facility near Camp Humphreys in South Korea during a recent training exercise. (Greg L. Davis / S&S)

CAMP HUMPHREYS, South Korea &#8212; She came in dressed in camouflage, lying horizontally on a stretcher, moaning with a huge, round potbelly.

She wasn&#8217;t a pregnant warrior, but with a Kevlar helmet stuffed under her shirt, she played the part well. Attentive medics surrounded and questioned her.

Helping a pregnant patient may seem an unlikely scenario for the 168th Medical Battalion, in the field for a weeklong quarterly training. But in real battle situations, military medics must be prepared to treat pregnancies &#8212; mainly of civilian noncombatants.

The 168th Medical Battalion is unique, said Command Sgt. Maj. Kevin Stuart. Its companies are the only ones in the Army with a dual mission: to provide regular health services during peacetime and to work with wartime casualties. Its four companies are distributed over the Army&#8217;s four administrative regions in South Korea.

The Headquarters and Support Company in Area 4 serves about 12,000 people, said Maj. Tzui Robbins. Unlike the other companies, it offers specialized clinics such as mental health and social work, giving it a &#8220;real-time world mission,&#8221; he said.

Last week, two of the battalion companies were practicing receiving and sorting casualties and providing what&#8217;s called primary care, Harper said. When the ambulances arrived, soldiers with the 168th Medical Battalion knew it was time to work.

The &#8220;injured&#8221; arrived in bursts, with a variety of wounds and pains. They were sorted and treated, then moved to waiting bays for evacuation.

But the field clinic also offers a variety of services, including full X-ray service and a blood lab.