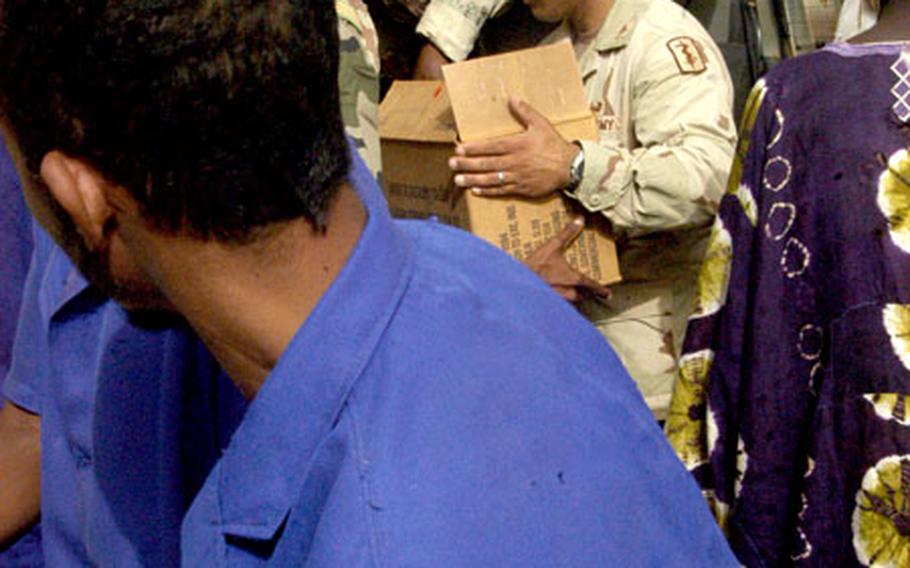 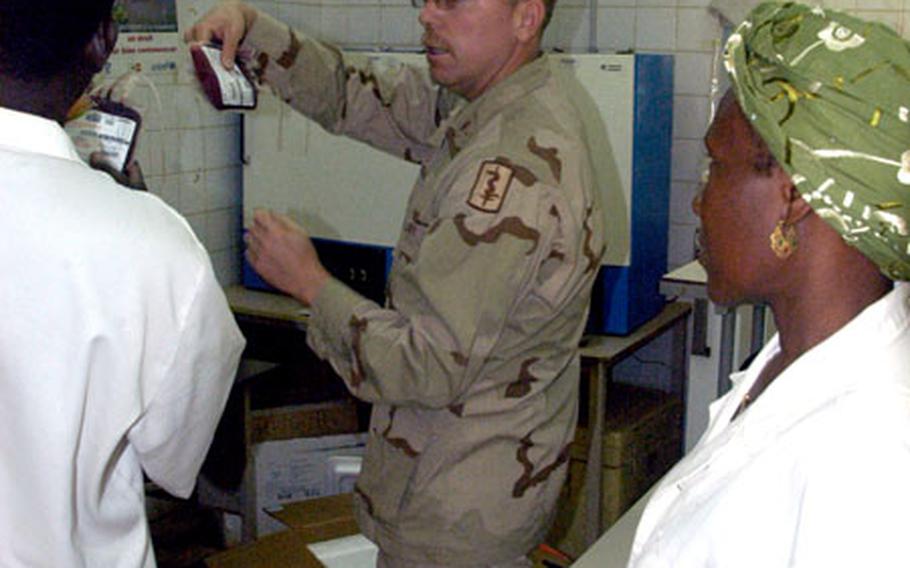 Capt. Warren Cusick of the 160th Forward Surgical Team explains to doctors at a maternity clinic in Tahoua, Niger, on Wednesday how to handle units of blood delivered by U.S. soldiers as part of Flintlock 05. (Charlie Coon / S&S)

TAHOUA, Niger &#8212; Outside the maternity clinic, women sat in groups in the shade, on top of blankets that were spread on the ground.

Inside, the metal shelves in the medicine room were empty. No medicine, many patients.

So U.S. soldiers provided a short-term cure. On Wednesday, they delivered boxes of basic medicine and other supplies to the three clinics in Tahoua. Then they wrote a prescription for future care and will kick it upstairs.

There might be future missions such as Flintlock 05, this month&#8217;s military-training mission in northern Africa, where soldiers also appraised local clinics and delivered medicine. All the medics can do now, though, is write reports on what they saw and make recommendations.

Flintlock 05 is a &#8220;Phase Zero&#8221; operation, according to the U.S. European Command, designed to help stabilize northern African nations and make their citizens less susceptible to violent extremists.

In Tahoua, a city of 40,000 in southwest Niger, one of the world&#8217;s hottest, driest and poorest nations, the medics of the 160th FST asked local doctors and nurses what they needed most, then placed orders for supplies through soldiers from the Fort Bragg, N.C.-based 96th Civil Affairs Battalion, which was working in Niamey, the Nigerien capital.

A few days later, the supplies arrived in Tahoua, located about 300 miles to the northeast.

Like in Iraq, where many U.S. civil affairs soldiers are currently serving, antibiotics are in demand in Niger, because unsanitary conditions cause diarrhea and other gastrointestinal sicknesses. Anti-malarial medicine was requested and provided, too, as were drugs to fight intestinal worms.

Comfort drugs such as ibuprofen and acetaminophen were delivered to the clinics, as were bandages and ointments. After those supplies run out, the clinics in Niger likely will be left where they were one month ago, with empty shelves.

Since demand is high, prices for medicine are high, too, at least for poor people. There are pharmacies in Tahoua but they are businesses, Haque noted, and are required to break even if not make a profit.

Ironically, Haque said, Niger has instituted a successful anti-tuberculosis program. But in visits to the clinics, he found several children with whooping cough and diphtheria, diseases &#8220;that have been nearly eradicated in the USA.&#8221;

Capt. Tony Martinez of the Belton, Mo.-based 418th Civil Affairs Battalion, who leads a small team of reservists for the Team Niger portion of Flintlock 05, said the reports he and others write are just a start for what might or might not happen next.