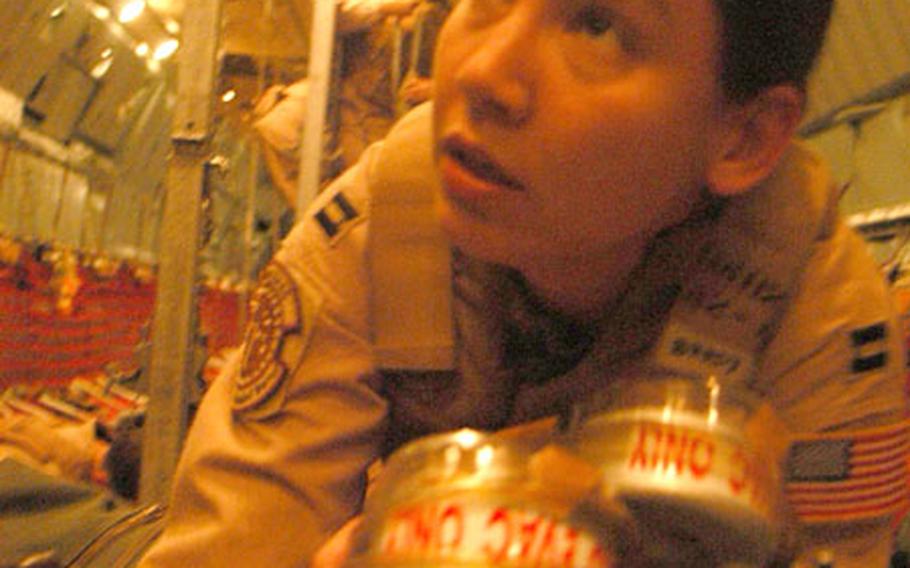 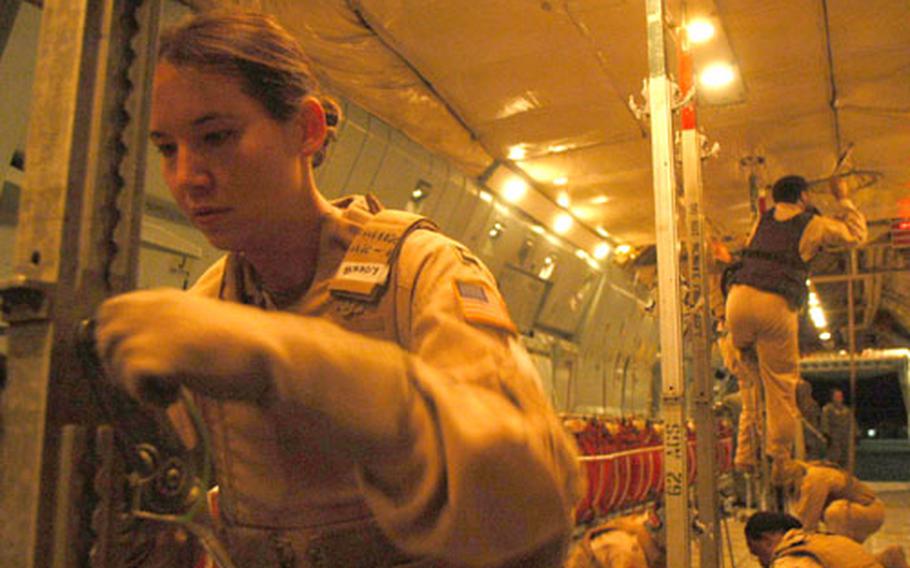 Nine seriously wounded troops on stretchers and 12 &#8220;walking wounded&#8221; were on their way, and the medics had to get the plane ready for the long flight to Germany.

A small radio blasted out the rhythms of INXS as the seven medics set up frames to hold stretchers and ran cables for oxygen. They had about an hour before the patients arrive.

Some of the wounded come from the Army field hospital at Balad&#8217;s Logistics Support Area Anaconda. Others are flown in from around the theater by helicopter or on a C-130.

The cargo bay on a C-141 can hold up to 103 stretchers. One crew carried 77 patients, the largest single load from Iraq, Brady said. But the number of patients does not define their workload, Brady said, it&#8217;s the extent of their injuries.

Some have died before getting aloft. Others die in flight.

Weeks later, the team will see a face in a newspaper and know that one of their patients died in the hospital.

Crews from the Air Mobility Command flying cargo to Iraq often have a sleepy crew of medics aboard, said Lt. Col. Phillip &#8220;Hawkeye&#8221; Pierce, a C-141 pilot from the 89th Airlift Squadron out of Wright-Patterson Air Force Base, Ohio.

After the C-141 lands, the plane&#8217;s crew help clear the way for the medics to set up their gear. They often watch in awe as the medics set to work caring for the wounded, Pierce said.

&#8220;The dedication of the medical personnel is phenomenal, considering the pressure they are under,&#8221; Pierce said.

A flight nurse for eight years, Brady is a nurse practitioner and float nurse at a hospital in Washington D.C., when she&#8217;s not serving in uniform. She and her crew, many who are volunteers from Reserve units, have been flying patients out of Iraq since November.

Most of their patients are combat injuries heading to the Army&#8217;s hospital in Landstuhl, Germany.

They also cared for Thomas Hamill, the KBR contractor captured in April by Iraqi insurgents. He was aboard their flight just three hours after he evaded his captors, Brady said.

Knowing how to comfort patients goes along with the job.

Sometimes wounded troops are toward the front of the plane, while their dead comrades may be in the back. They keep them separated, but the troops know their fallen buddy is on the ride home.

Some men are self-conscious of their wounds, asking how they will explain their disfigurements and injuries to wives and girlfriends or if they will be able to father children, Brady said.

In fact, her unit conducted what Brady said was the heaviest medical airlift since Vietnam: about 2,800 injured troops. Bullets, rockets and shrapnel caused major injuries, claiming limbs and lives.

During April&#8217;s heavy fighting, the team treated patients on flights about three days each week. Now they&#8217;re down to two days.

What&#8217;s unclear is whether or not violent attacks against coalition forces will increase as the June 30 deadline to hand over power to the new Iraqi government draws closer.