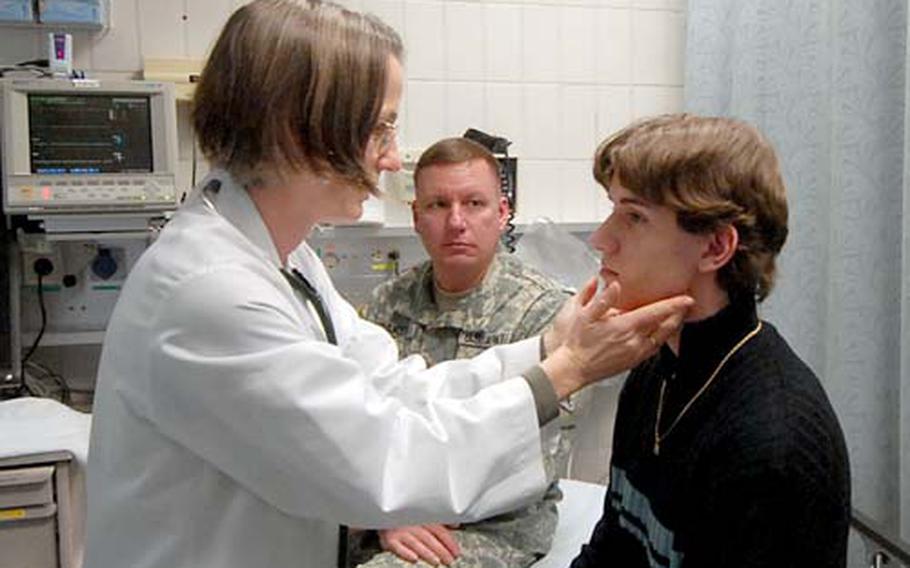 European Regional Medical Command officials are well aware of the complaints: interminable wait times on the phone to make a doctor&#8217;s appointment and then being told there are none available.

ERMC officials say patient surveys indicate more than 90 percent of patients are happy with their medical visits &#8212; once they happen. But antiquated phone and appointment management systems have made getting to that point tough. Repeated doctor deployments, the dwindling number of Army reservist doctors and fewer medical facilities as a result of base closures have all stretched the medical corps. What&#8217;s more, doctors have been diverted to attend to the influx of patients from the wars in Iraq and Afghanistan.

But Brig. Gen. Keith Gallagher, commander of ERMC, and his staff have discovered ways to improve patients&#8217; access to care.

To relieve the immense strain on medical facilities when soldiers leave for and return from downrange, a new roving team of doctors will visit garrisons that are going through pre- or post-deployment assessments. Extra appointments were squeezed into the workday this summer, and a new computer system tracks the number and types of appointments available, giving commanders a tool to see if they need to add acute appointments as flu season enters full swing. The Army&#8217;s guidelines for appointments are to schedule patients within 24 hours for acute care, a week for routine care and 30 days for specialty or wellness appointments.

Exam rooms have also been added as military treatment facilities are renovated in Grafenw&#246;hr, Vilseck, Illesheim and Katterbach in Germany, and Vicenza in Italy, to meet Gallagher&#8217;s standard of two exam rooms per provider.

Patients say they already are seeing the results.

&#8220;Just this last week I called in on Monday and I got an appointment on Tuesday,&#8221; said Air Force Master Sgt. Cheree Lewis, who had taken her son to Landstuhl last month for a sprained thumb. &#8220;It used to be very frustrating trying to get timely appointments.&#8221;

The process of making an appointment by phone has also been a hassle, with long wait times that caused many patients to hang up. A new $300,000 centralized call system is being built and staffed, and it should be available to Heidelberg residents by January. It will then gradually be phased in at Stuttgart and other facilities, with the hope that all of them will be using it, along with a new central appointment management system, by April.

&#8220;This should provide standardization for our patients,&#8221; said Col. James Mundy, chief of staff of Europe Regional Medical Command. &#8220;They will be managed the same way every time.&#8221;

Until then, using Tricare Online to make an appointment might be patients&#8217; best bet.

Recently it was not much easier than the phone, as patients were often met with the message that appointments were not available. Army medical officials have since increased the number of appointments accessible by Tricare Online. Now, at most facilities, more than 80 percent of the appointments can be booked through it.

Appointments for military civilians, Department of Defense teachers and many retirees &#8212; who used to get appointments, but now can&#8217;t as overseas resources have been consolidated and focused on servicemembers and their families &#8212; may still find a limited number of available appointments. This can be hard on patients who have chronic conditions such as diabetes or high blood pressure, said Col. (Dr.) William L. Novakoski, deputy commander of ERMC.

Novakoski and Mundy recommend that space-available patients establish a relationship with a nearby German physician, thereby avoiding this type of episodic care and the hassle of calling in after active-duty sick-call times to check if appointments are available.

To assist them in making that first appointment with a German doctor, ERMC is hiring 20 host-nation patient liaisons, so they need not fear the language barrier or any other concerns about German health care, Mundy said.

Still, the folks at Landstuhl understand that older patients, especially retirees, want to be seen by American doctors. To help them, the internal-medicine practice has added doctors and now will be open to patients who need constant care for hypertension, severe asthma, diabetes, high cholesterol, kidney problems, chemotherapy and any other chronic condition, said Maj. Patricia John, access manager. Despite a recent uptick in violence in Afghanistan, John said they were able to do this because Landstuhl is seeing fewer patients from downrange.