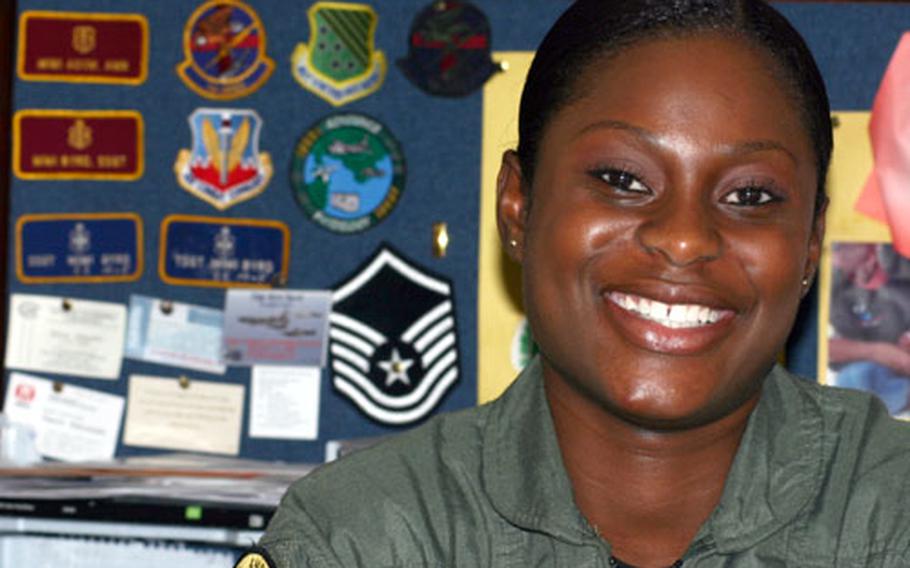 Technical Sgt. Mimi Byrd, an airspace physiology technician with 18th Aerospace Medicine Squadron, recently learned that she was selected to become a Medical Services Corps officer. Behind her at her desk she keeps her goals on display: pictures of her young daughter and her husband as well as the insignia of the two ranks she was striving to achieve next. (Cindy Fisher / S&S)

KADENA AIR BASE, Okinawa &#8212; Tech. Sgt. Mimi Byrd had a lot to be thankful for this Thanksgiving.

She recently learned she was one of 70 applicants out of a field of more than 180 airmen and civilian hopefuls selected to become officers in the Air Force&#8217;s Medical Service Corps.

Byrd, who was born in Nigeria but raised in the Maryland area, was already on the fast track by becoming a technical sergeant in less than eight years of service.

The 28-year-old airspace physiology technician with the 18th Aerospace Medicine Squadron said she had a goal firmly fixed in her mind &#8212; to become an officer. To that end, she has completed a bachelor&#8217;s degree in business management and a master&#8217;s in business administration.

After she graduated from high school in 1998, she worked at a Target retail store in Maryland for about eight months before she was approached by an Army recruiter. The Army sounded good, she said, but a high school mentor urged her to also look at the Air Force.

She decided to enlist in the Air Force in February 1999 for &#8220;the educational opportunities, to see what the military had to offer and, of course, to serve my country,&#8221; Byrd said.

Not realizing the military had regulations regarding hair, she got braid extensions before leaving for initial training, thinking she wouldn&#8217;t have to worry about styling her hair. As soon as she got off the bus, the military training instructors &#8212; known as TIs &#8212; were calling her Janet Jackson and Milli Vanilli and asking her to sing them a song, she said.

That wasn&#8217;t the only incident that day to cause her TIs to remember her, she said.

Coming off the bus, her group was clustered in a formation and a TI was going down the line yelling at everyone. Once he passed her, she thought she was safe and she started laughing, she said.

That&#8217;s when she learned TIs travel in packs.

Before Byrd knew it, a loud swarm of them descended on her. And that was just the first day.

Since that rocky start, she has worked on standing out, albeit in a more positive manner.

Her next goal was to become an officer, but she wanted to stay in the medical service field, she said.

As an airspace physiology technician, she works with simulators that familiarize flight nurses and doctors, pilots and other aircrew with the hazards of high-altitude flights and the resulting oxygen deprivation.

Just like in that &#8220;Top Gun&#8221; scene where the pilots are playing cards in an altitude chamber, she runs a chamber to show flight personnel what symptoms to expect during hypoxia &#8212; deficiency of oxygen in the tissues.

&#8220;I love my job,&#8221; she said. But she feels she can contribute more to the Air Force as a medical administration officer.

She has been working toward that goal since 2000, when she started on her bachelor&#8217;s degree. By taking a lot of CLEP tests, she completed that degree in three years. She finished her master&#8217;s in three years as well.

Byrd, who credits her past leaders for supporting her educational goals and letting her seek self-improvement, has some simple secrets for success.