Medical personnel at Landstuhl dealing with stress of job 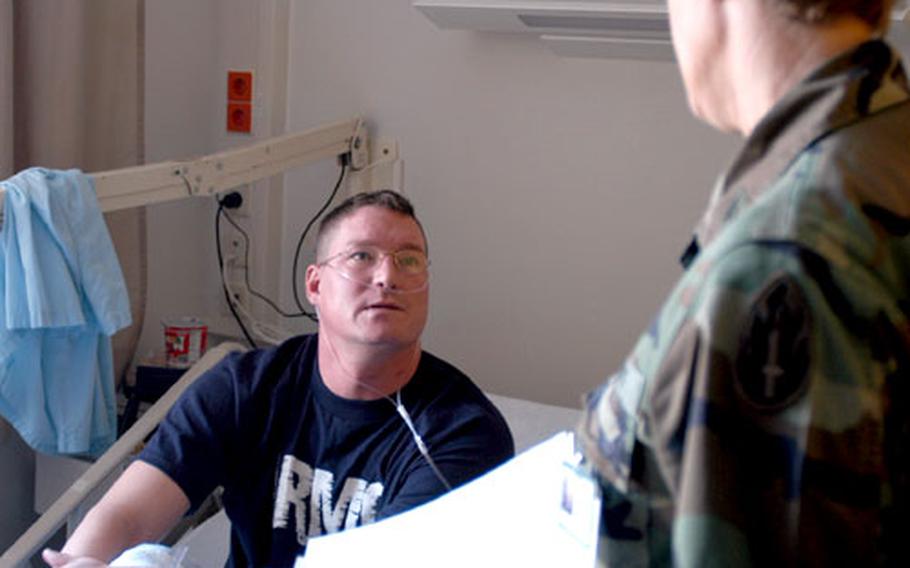 LANDSTUHL, Germany &#8212; After almost 20 years helping the wounded as a reservist, Capt. Rogelio Alonzo has developed a tolerance for seeing gruesome injuries.

But even his defenses break down sometimes, and he&#8217;s overcome with sympathy.

Reservists provide key relief in the hospital, fulfilling services from bedside care to cooking. They help ease the hospital&#8217;s workload that comes from serving almost 22,000 wounded soldiers from Iraq and Afghanistan since the war on terrorism began in 2001.

During busy times, the hospital sometimes resembles a scene out of the television show &#8220;M*A*S*H,&#8221; Slyter said, as gurneys carrying wounded soldiers roll by in every direction and doctors dart in and out of surgery.

The hospital reserve units are made up of mostly nurses, who come from a variety of backgrounds and sometimes are years removed from bedside care, said Alonzo, assistant head nurse for the hospital&#8217;s medical and surgical ward.

Nurses from large metropolitan hospitals often have little trouble adjusting to the volume of patients and gravity of the injuries that Landstuhl handles daily, Alonzo said. But others find themselves in an environment that is difficult to prepare for, he said.

Alonzo recalls holding the hand of an Army staff sergeant in his 40s who lost sight in both eyes after a makeshift bomb exploded near him in Baghdad last year.

In an unusual case, doctors examined a young Marine who had fallen out of a building and could not move his legs. Tests showed he was not paralyzed but suffered from a &#8220;conversion disorder,&#8221; a psychiatric condition that can inhibit motor movement after someone experiences a stressful event, Alonzo said.

The soldier did eventually regain the use of his legs.

Maj. Angela Muzzy, a nurse with the 349th reserve unit who works in the hospital&#8217;s intensive care unit, delivers the same basic message to her patients, no matter if they appear coherent or not, she said.

And when she is not helping soldiers deal with severe injures, she concentrates on dealing with the carnage she sees by praying, traveling on her days off and talking with people trained to help nurses with job-related stress.

Recurring images of burn victims and amputees still remain for Muzzy, a professor of nursing at the University of Arizona. But that was a price she was willing to pay for the &#8220;most honorable nursing job I&#8217;ve ever had,&#8221; she said.

To prepare for work in the intensive care unit, Lt. Col. Robert Savage, of the 328th reserve unit, said he communicated by e-mail with nurses working there now.

Savage, a staff nurse at a small hospital outside of Boston, said he expects the young men will remind him of his boys, who are 16, 20 and 22 years old.