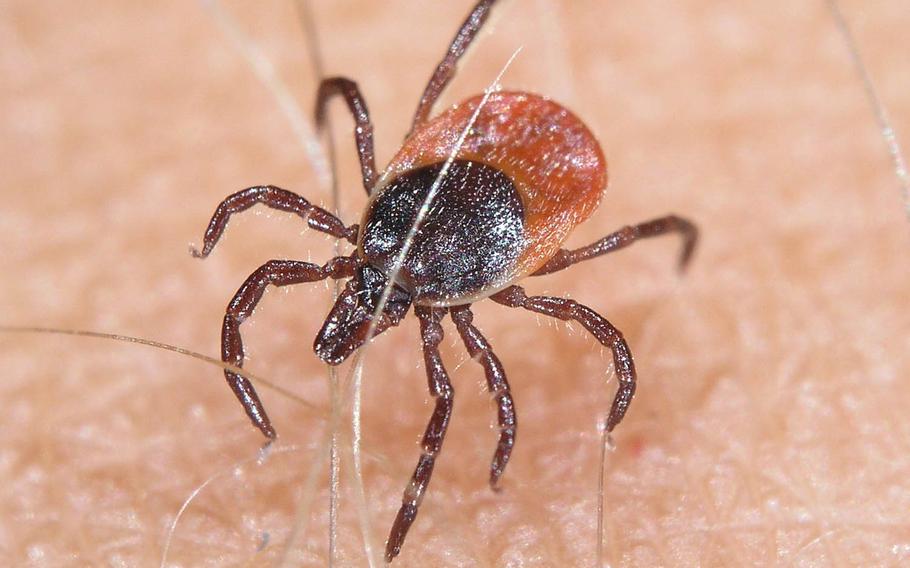 Ticks may be small, but can carry serious diseases, such as Lyme disease and encephalitis. (Courtesy of U.S. Army Center for)

Ticks may be small, but can carry serious diseases, such as Lyme disease and encephalitis. (Courtesy of U.S. Army Center for) 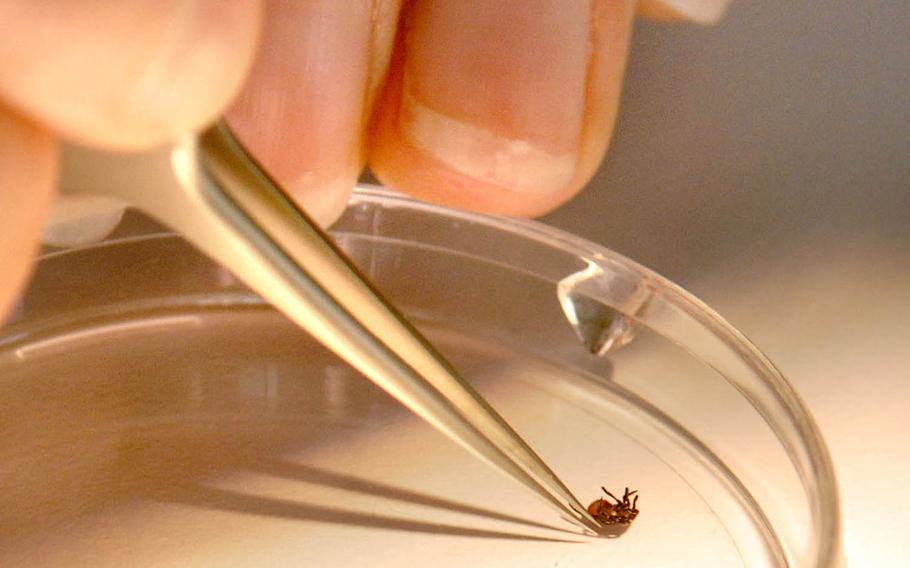 Buy Photo
A lab technician in the entomological sciences division at Landstuhl Regional Medical Center looks at a tick sent in by a health clinic for identification. (File/Stars and Stripes)

LANDSTUHL, Germany — Army officials are urging servicemembers across Europe to be on the lookout for ticks, as the range of a potentially deadly virus increases across the Continent.

The common sheep tick — Ixodes ricinus in Latin — can be found crawling around in patches of grass or in the woods.

The tick carries one of three forms of tick-borne encephalitis, a virus that attacks the nervous system and can cause fatal brain swelling.

“It’s extending its range throughout Europe and we’ve seen two of the most severe seasons in recent history in the past two years in Germany,” Coldren said.

The disease has been reported in Rheinland-Pfalz, where tens of thousands of military personnel and their families live, and is “quite common down in Stuttgart,” Coldren said.

Three cases requiring hospitalization have been reported this year among the military community. One was a soldier and the two other patients were family members of military personnel.

In Germany, 260 cases of TBE have been documented this year, according to the Robert Koch Institute, which monitors public health data in Germany.

People infected with TBE exhibit the general symptoms of flu with a fever, headaches and a stiff neck.

At that point, a patient may exhibit an altered mental state and complain of a severe stiff neck, he said.

The TBE mortality rate is 1% to 2%, according to the Centers for Disease Control and Prevention. In as many as 20 percent of those infected, permanent neurological damage occurs.

As with many diseases, children and the elderly are more susceptible to the effects of the virus.

Coldren said the easiest way for people to protect themselves is to dress appropriately for outdoor activities, in clothing treated with an insecticide such as permethrin, and to use insect repellent with DEET on the skin. Checking for ticks is essential after spending considerable time in the woods, he said.

A European-made vaccine for TBE, a series of three shots given over a six-month period, is available from German providers.

“Since TBE does not exist in the United States, there is no U.S. Food and Drug Administration-licensed vaccination against TBE available,” Coldren said.

Because the vaccine is not FDA-licensed, it is not stocked or provided at U.S. medical facilities in Europe, but the TBE vaccine is covered by Tricare.