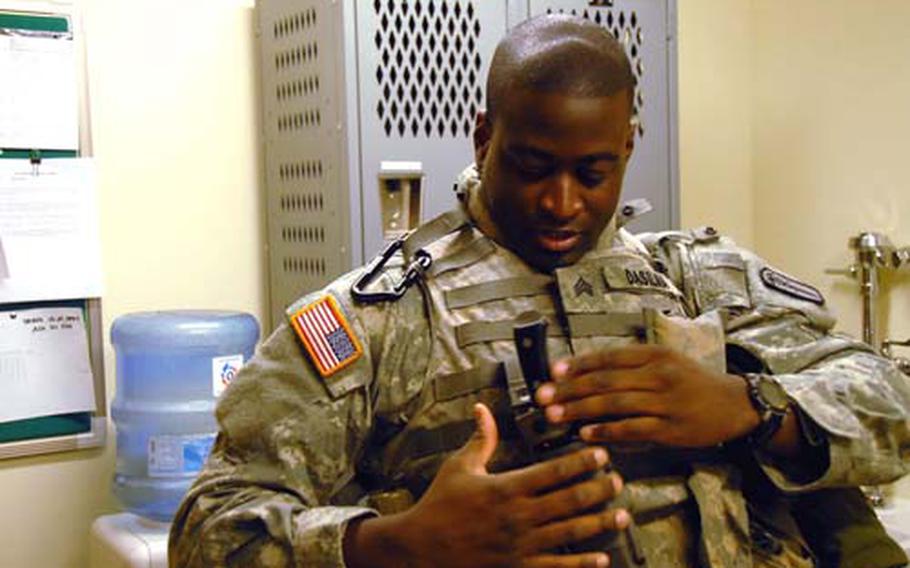 Sgt. David Dasilima gets ready at the Brian Allgood Community Hospital for land navigation practice. Dasilima, who works at the immunization clinic, was recently named the U.S. Army&#39;s Medical Command Noncommissioned Officer of the Year -- Best Warrior. He will compete for NCO of the Year this fall against soldiers from all commands in the Army. (Ashley Rowland / S&S)

SEOUL &#8212; Sgt. David Dasilma was going to begin swimming lessons in December. Then his instructor got busy and had to cancel.

Those lessons would have come in handy last month, when the 28-year-old went for an unexpected swim.

Dasilma, who works in the immunization clinic at the Brian Allgood Community Hospital at U.S. Army Garrison-Yongsan, was named the U.S. Army Medical Command Noncommissioned Officer of the Year/Best Warrior on April 3.

But it was the mystery event that cost him the most points in the competition: Rescuing a casualty in a pool, then giving him CPR.

It took Dasilma, who couldn&#8217;t swim, 15 minutes to swim across the pool with his casualty. And yes, he was scared.

"I probably swam in circles for about 10 minutes of it," he said. "I was basically kicking water."

Before competing at Fort Lewis, Dasilma had to win at the battalion, brigade, and then Pacific-wide medical command competitions. Dasilma will compete in this fall for the U.S. NCO of the Year against approximately 12 other soldiers in Washington, D.C.

The competition is especially significant because 2009 is the Army&#8217;s "Year of the NCO," he said. His biggest hope, aside from winning the competition, is to meet President Barack Obama, who Dasilma thinks might make an appearance at the event.

The winner of the competition will be announced on Oct. 5. To prepare for the competition, Dasilma is training to be certified in combatives, and will practice assembling and disassembling crew-served weapons, something soldiers in the medical field rarely do. He also hopes to earn his Expert Field Medical Badge this spring.

"I know how to save a life in the water, if push comes to shove," he said.