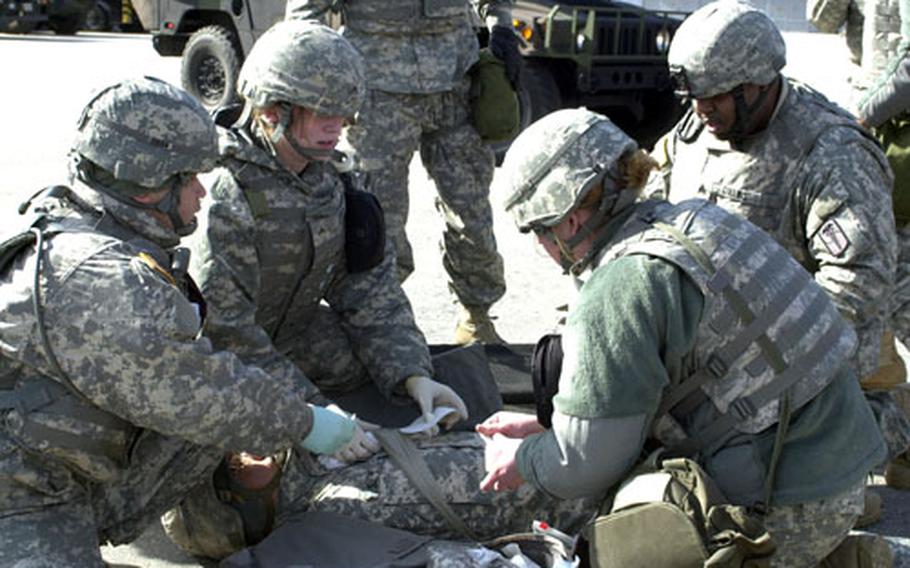 Medics simulate treatment of battlefield injuries Tuesday during an exercise that brought some 200 medical personnel from seven companies to Camp Stanley in South Korea. During the exercise, the medical units practiced procedures that would be used in the event hostilities resumed on the peninsula. (Jon Rabiroff / S&S)

Medics simulate treatment of battlefield injuries Tuesday during an exercise that brought some 200 medical personnel from seven companies to Camp Stanley in South Korea. During the exercise, the medical units practiced procedures that would be used in the event hostilities resumed on the peninsula. (Jon Rabiroff / S&S) 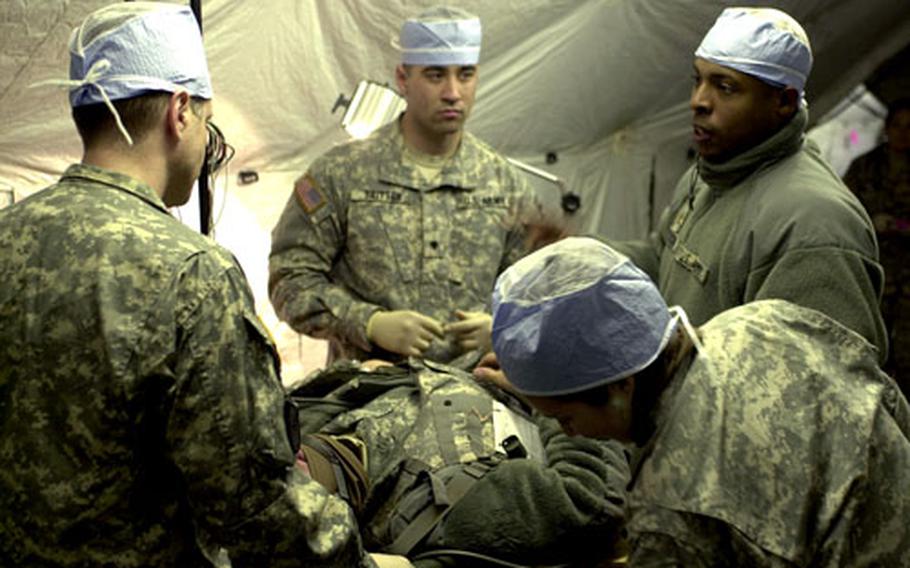 Medical personnel discuss treatment options for a "patient" brought into their operating room during an exercise Tuesday at Camp Stanley. (Jon Rabiroff / S&S) 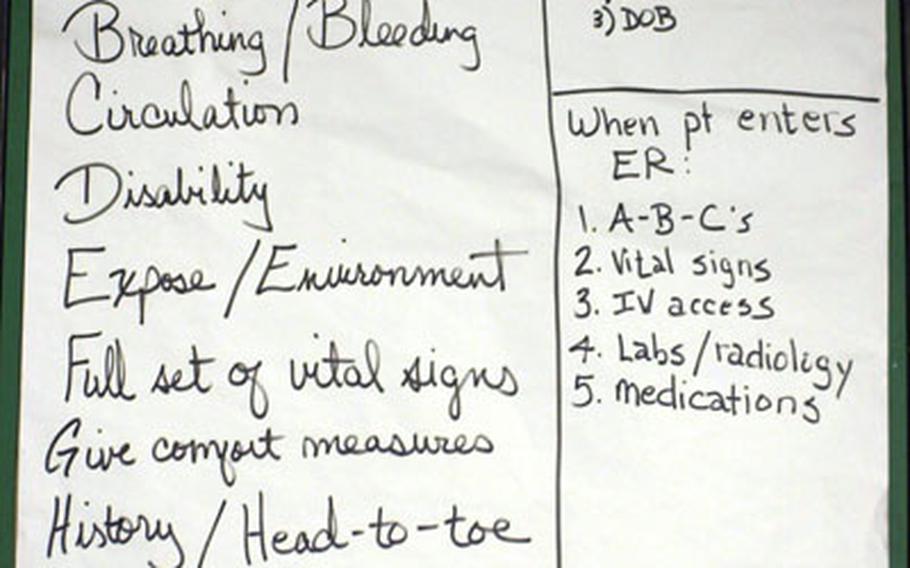 Procedures are outlined on a notepad displayed inside a mobile medical facility set up Tuesday at Camp Stanley. (Jon Rabiroff / S&S)

CAMP STANLEY, South Korea &#8212; Shouts of &#8220;Amputation! Amputation!&#8221; were heard as a soldier on a stretcher was hustled into a tent where a surgical staff was preparing to treat him.

The scene was played out as part of an exercise Tuesday that brought some 200 doctors, medics and soldiers from seven companies together here to prepare for the possibility that hostilities with North Korea could someday resume.

Officials said the four-day exercise would include a mix of sharing the latest in battlefield medical techniques coming out of the wars in Afghanistan and Iraq, with old-school evacuation procedures developed during the linear wars of the past.

But the most important goal of the week, they said, is simply to get units working together so everyone is on the same page should war ever break out again on the peninsula.

Officials said a major problem faced by South Korea-based medical units is that most everyone is here on a one-year tour, making coordination and cooperation difficult over time.

On Tuesday, that teamwork and communication was on full display as a half-dozen mock casualties were brought into Task Force Wilson &#8212; a mobile medical care facility set up at Camp Stanley.

As patients were unloaded from ambulances, they were carried to appropriate treatment tents based on the injuries listed on cards hanging from their shirts.

The medical companies were brought together in conjunction with Key Resolve/Foal Eagle, an annual war game of the U.S. and South Korean militaries that is under way now.

&#8220;We are practicing for a transition to hostilities,&#8221; Corbett said, pointing out that a resumption of the Korean War &#8212; which was only suspended by armistice in 1953 &#8212; would most likely be marked by &#8220;very clear levels of care&#8221; from the battlefield back to specialized hospitals in other countries.

As part of the exercise, all those levels of care were put into action as 11 South Korean soldiers posing as battlefield injury cases were flown by helicopter Tuesday to the Camp Stanley treatment facility and then on to Osan Air Base in South Korea for more extensive care and finally on to Japan for specialized services.

If hostilities were to resume in Korea, Lee said, the key to successful medical care would be getting facilities as close to the battlefield as possible.