Lt. Col. Robert Gephardt, a doctor with 1st Battalion, 12th Cavalry Regiment, sees patients Thursday at a medical clinic in the village of Al-Rashad, located on the northeastern side of Baghdad next to the crime-ridden Sadr City area. (Charlie Coon / S&S)

Lt. Col. Robert Gephardt, a doctor with 1st Battalion, 12th Cavalry Regiment, sees patients Thursday at a medical clinic in the village of Al-Rashad, located on the northeastern side of Baghdad next to the crime-ridden Sadr City area. (Charlie Coon / S&S) Staff Sgt. Heidi Mendez of Miami and the 478th Civil Affairs Battalion gets swarmed by local children Thursday during a medical outreach visit to Al-Rashad, a village on the northeastern edge of Baghdad. (Charlie Coon / S&S) 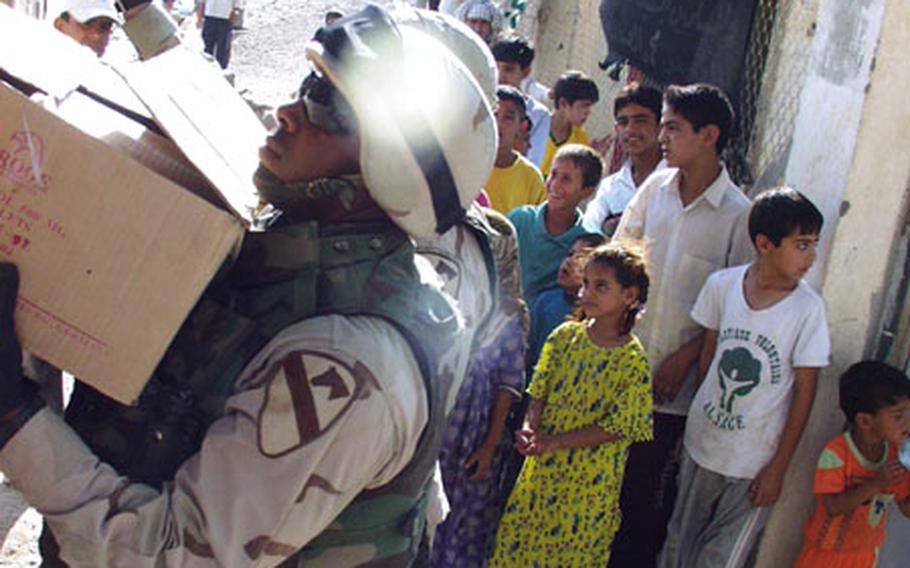 AL-RASHAD, IRAQ &#8212; The eviction of Saddam Hussein has forced Iraqis to turn to new leaders to get things done. And those efforts must start in the neighborhoods.

&#8220;The message has to be, &#8216;All this is happening because of your neighborhood council,&#8217;&#8221; Maj. Joel Hagy said Thursday as soldiers from the 1st Battalion, 12th Cavalry Regiment unloaded a truck filled with medical supplies at a local clinic.

The Medical Civil Action Project, or MEDCAP, was the first by 1st Cavalry Division troops from Forward Operating Base Eagle, a dust-swept fortress located at the northeast corner of Baghdad.

They&#8217;d been asked to bring the supplies to Al-Rashad by members of its Neighborhood Advisory Council.

The convoy by Company C, 3rd Platoon consisted of three armored Humvees and two trucks. From the gate, the vehicles took a couple lefts and a couple rights over pot-holed roads and arrived at Al-Rashad in 10 minutes.

The small village was peppered with one-story homes made from brick or cinder block. Some of the &#8220;houses&#8221; had roofs and some didn&#8217;t. The landscape was flat and nothing but dirt and rock. The only thing green was the water that filled a roadside ditch.

About 30 soldiers made the trip, plus a few members of the Iraqi Civil Defense Corps, the country&#8217;s new reservist-like militia.

Once in town, the soldiers got out of their vehicles and began carrying boxes inside the village clinic. The supplies included pain relievers, anti-diarrheals, antibiotics and intravenous fluids to be administered by a local doctor.

Hatem Jewad Kadim, chairman of the village council, acknowledged that it&#8217;s been tough going since the fall of Saddam.

&#8220;After the fall of the former regime, our feelings were great toward the coalition forces,&#8221; he said through an interpreter. &#8220;Some gaps have happened because people need services.

&#8220;But we know services cannot be done in one year after all the destruction that began 35 years ago [when Saddam took power].&#8221;

Al-Rashad is located two miles from the crime-infested squalor of Sadr City, a densely populated section of northeast Baghdad that used to be called Saddam City.

Now it is named for Mohammed Sadr, a Shiite cleric killed by Saddam and the father of radical cleric Muqtada al-Sadr, whose Mehdi army is currently fighting U.S. forces in the south.

Inside the clinic, children buzzed about while Iraqi men sat and watched. Lt. Col. Robert Gerhardt, a doctor with the 1-12th, tended to a steady stream of patients.

But one man sat in a corner and glared.

You couldn&#8217;t tell it from dozens of children who clamored around the U.S. soldiers and vehicles like ants around a sugar cube.

After 90 minutes, the soldiers returned to their vehicles for the short ride back to base. Somehow it managed to not run over any of the children, who scattered like a flock of birds when the Humvees started to roll.

A water project for the village could be coming, Walton said.

&#8220;The [Neighborhood Advisory Council] also needs to get the word out to the people of this support we provided. We need to show the people that the NAC is capable of cooperating with the coalition and providing results.&#8221;