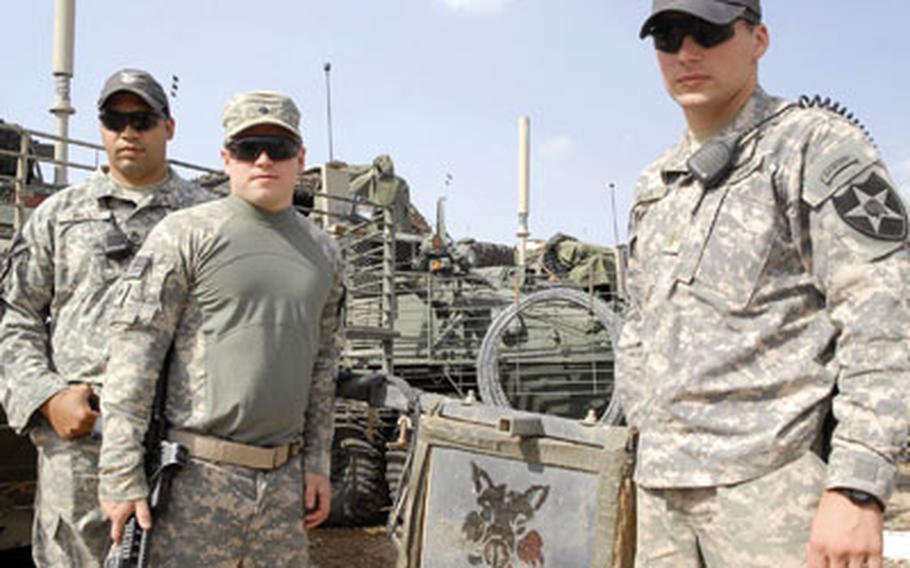 And while the soldiers worked to save his life, the boy&#8217;s father appeared on the scene, accusing the soldiers of shooting his son, according to U.S. military officials.

The soldiers say they never fired a shot because they couldn&#8217;t see who was shooting at them.

Stars and Stripes tried to contact the father, but was told by public affairs that the father would not talk to any media, fearing that if he or his son were identified as having received aid from U.S. forces, they would be in danger.

There is no evidence U.S. soldiers fired their weapons during the incident, so the military is not investigating, said 2nd Lt. Jennifer Palmeri, spokeswoman for the 3rd Stryker Brigade Combat Team, 2nd Infantry Division.

According to O&#8217;Krent, an Army medic, and other soldiers on the scene, a patrol of Strykers was rounding a corner onto a normally busy street in Biwaniya on Sept. 20 when they noticed an unsettling absence of people outside.

Someone had just commented that something seemed amiss when the crack of small-arms fire broke the silence and the soldiers saw dust kicked up by the bullets next to the Strykers. But they couldn&#8217;t see the shooter.

A boy on the street stumbled face-first to the ground. O&#8217;Krent heard Staff Sgt. David Hill yell for him and he grabbed his bag of medical supplies.

O&#8217;Krent could see blood pooling but no wounds until he rolled the boy onto his back. The boy had been shot in the chest and pelvis and had shrapnel in his ankle. He was struggling to breathe. O&#8217;Krent covered the sucking chest wound and quickly opened a small hole on the other side of the boy&#8217;s chest to relieve pressure on his lungs.

After bringing the child to a nearby courtyard to stabilize him, Apache Company soldiers loaded him into a Stryker and rushed him to nearby Forward Operating Base Warhorse, where he was soon put on a helicopter and flown to Balad for further treatment.

"I honestly thought the kid was dead," said Hill, of Pomona, Calif. "But Doc did awesome."

Just one month into his first tour, this was not how O&#8217;Krent expected to test his skills.

"You&#8217;re not thinking anything, you just fall into training," he said. "It&#8217;s just about keeping your composure and trusting in your squad [to protect you]."

The mood in the room darkens when a reporter asks O&#8217;Krent, Hill and Nolan about the father&#8217;s allegations.