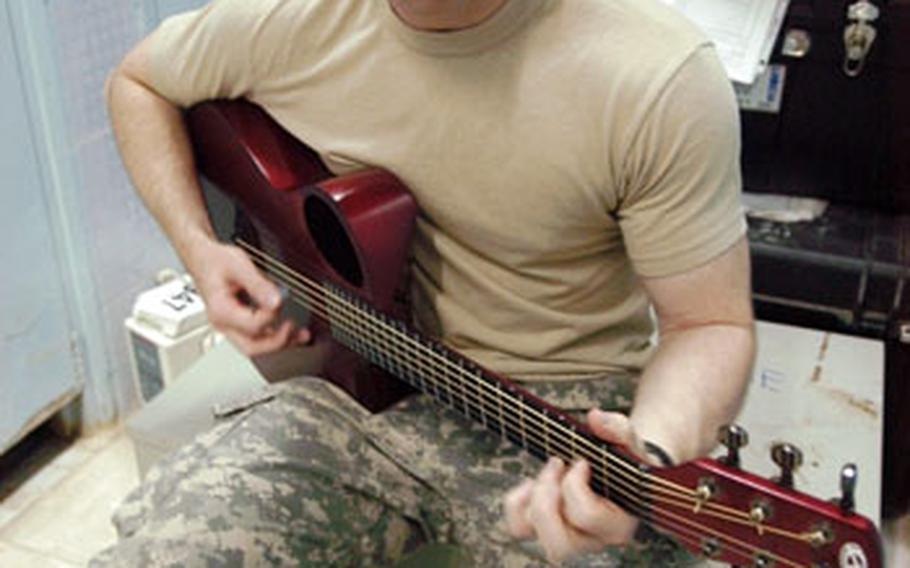 BAGHDAD &#8212; Almost every unit has one: The guy with the guitar. Whether in the CHU or around the burn barrel, he&#8217;s the one who&#8217;s all too eager to pick up his acoustic and play a song for everyone. Sometimes even when no one wants him to.

Sgt. Stephen Covell is one of those guys for Headquarters and Headquarters Company of the 3rd Brigade, 82nd Airborne Division&#8217;s 5th Squadron, 73rd U.S. Cavalry Regiment.

Covell has taken it beyond playing for the fellas, though. The 26-year-old medic from Pacific Grove, Calif., has recorded and toured on the strength of his music.

He also contributed a song to an album of rock songs by Iraq and Afghanistan war veterans on the label To the Fallen Records.

Covell first deployed with the 5-73 in 2006 to the volatile Diyala province, even though he was supposed to be a part of Fort Bragg&#8217;s All-American Chorus.

Returning home inspired Covell to write "Sand Hills to Sandals," a song about what it feels like to come back to the normal world after more than a year in Iraq.

"I wanted to give people a piece of what I experienced," he said. "It&#8217;s about coming home and being happy you&#8217;re back and realizing the things you took for granted when you left."

While Covell said his military experience doesn&#8217;t influence a ton of his music, some people have responded to the song about getting out of Iraq. Finally.

"A lot of people asked me what it was like to be there," he said. "I&#8217;ve heard from family members who said it helped them understand what it&#8217;s like over here."

Covell picked up the guitar at 18, but had played piano before that. "And I had a terrible run-in with the trumpet for about a year," he added.

His influences include John Mayer, Jack Johnson and Dave Matthews.

For up-and-coming musicians, Covell&#8217;s advice is to learn the basics on their own but get with instructors or other players once they plateau to try to take their skills to the next level.

"Some songs write themselves in 15 minutes, some I&#8217;ve been working on since high school," Covell said. "Keep writing. The more you write the more you define your own style."