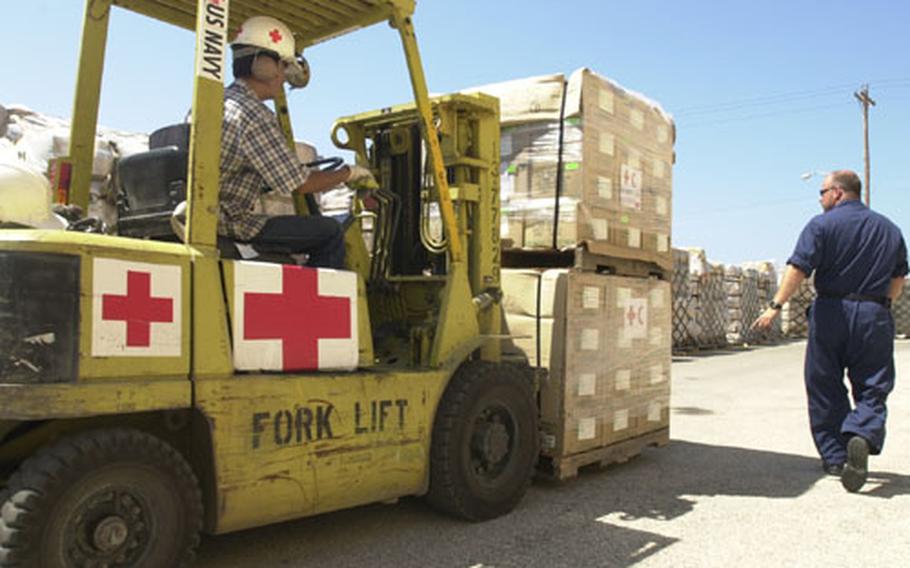 Medical personnel at Naval Hospital Rota, Spain, prepare $2.5 million in medical supplies and medicine to be used for humanitarian relief operations and medical training in Morocco. (Courtesy of U.S. Navy)

About 100 U.S. military medical personnel are preparing Morocco for disaster.

The group, most of whom hail from U.S. Naval Hospital Rota, Spain, are sharing expertise in medicine, evacuation, dealing with mass casualties and offering treatment &#8212; even surgery &#8212; to local citizens around Er-Rachidia, Morocco.

The exercise, MEDFLAG 2003, is a three-phase endeavor conducted with the Moroccan military and running through Sept. 20. Advance teams arrived Friday and the exercise officially began Saturday.

This time, U.S. and Moroccan medical teams begin the exercise by training in areas such as emergency triage, evacuation and handling the media.

The second phase is a mass-casualty scenario. Volunteer victims, complete with medical makeup and latex injuries, will test Moroccan military medics as well as civilian teams. They will treat and evacuate the simulated casualties.

In the final phase, Moroccans and Americans will treat real patients in areas on the outskirts of Er-Rachidia. They will offer checkups, dental exams, distribute eyeglasses and perform general surgery and eye surgery.