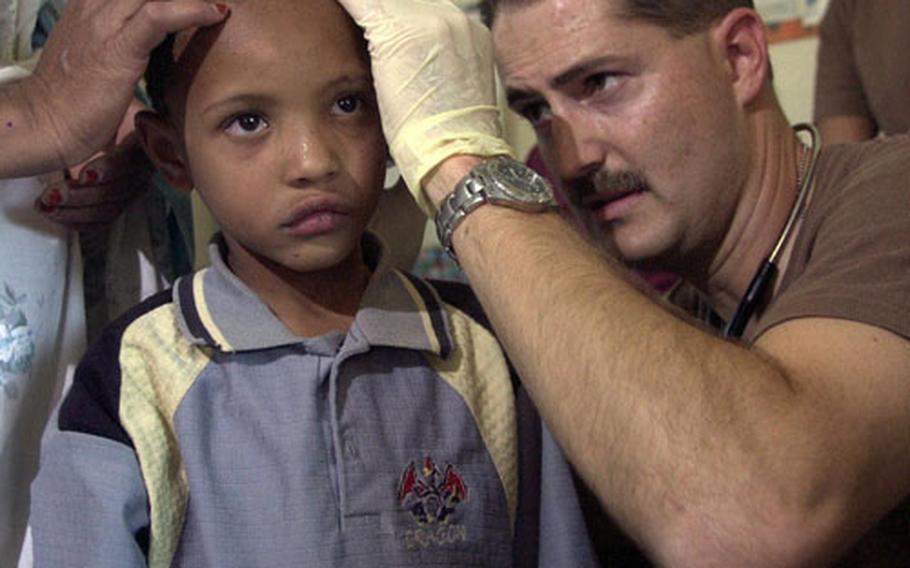 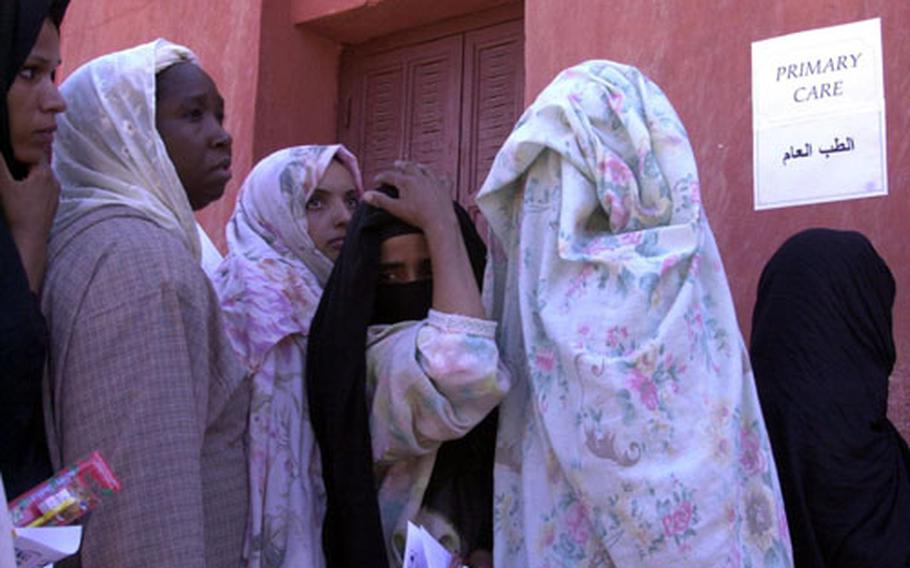 Women in Zaouia Aoufous, Morocco, wait to be seen by Moroccan and U.S. military doctors last week during a medical training and humanitarian mission dubbed MEDFLAG 03. U.S. and Morocco militaries led the exercise. The women were standing very close together so others can’t cut in line. (Scott Schonauer / S&S) 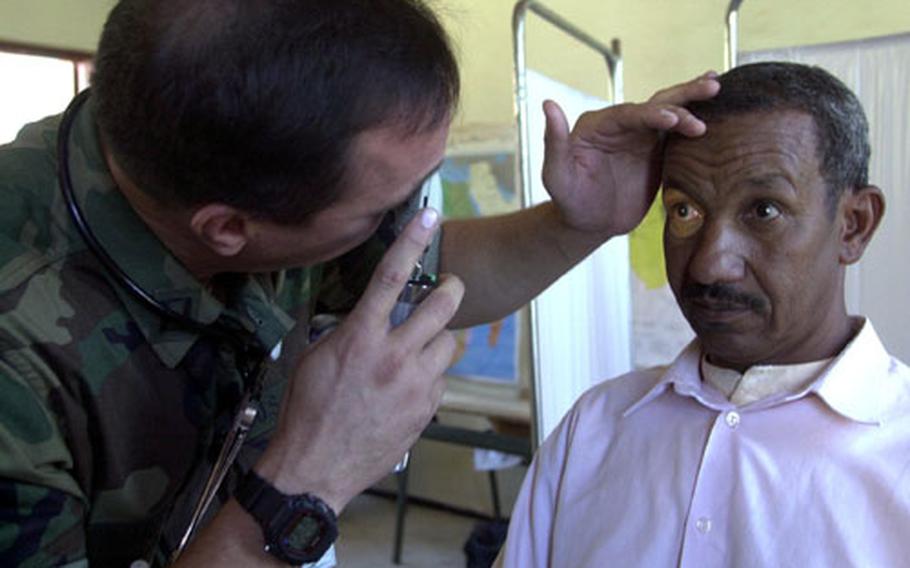 ZAOUIA AOUFOUS, Morocco &#8212; The Moroccan woman limped over to the chair and opened her mouth, offering more proof that dentists in rural Morocco are as rare as waterfall in the arid, drought-stricken region.

She sat with the same look of fear that many people have when they see the dentist for the first time.

The only difference is that this woman, her leathery face wrinkled from the blazing North African sun, was going through the nerve-wracking experience in her late 60s.

As U.S. Navy Cmdr. Kurt Hummeldorf began to pry the aching tooth from her mouth, the woman gripped a spit cup with one hand and clenched her long, body-enveloping gown with the other.

While her first trip to the dentist could well be her last, she can find some comfort in the fact that she doesn&#8217;t have many teeth that will require future work. Most have rotted away.

The woman Hummeldorf operated on last Tuesday was among the more than 6,200 people treated by U.S., African and European medical teams during an annual exercise and humanitarian relief mission in southeastern Morocco.

While military doctors, nurses and corpsmen are using the training to hone their skills and help people in rural Morocco, the purpose of the exercise is to spread good will in Africa and project a good image of the American military in a country that is predominantly Muslim.

As the continent struggles with civil wars, AIDS and poverty, Africa has become a growing concern to the U.S. government.

Morocco&#8217;s location along the Mediterranean Sea and the Strait of Gibraltar makes it strategically significant, while terrorism concerns give the United States good reason to maintain its partnership with the country.

In May, terrorists bombed several locations in the Moroccan city of Casablanca, killing 45 people.

Teaming up with Morocco shows terrorists that this is &#8220;not where the seeds of terrorism are planted.&#8221;

&#8220;I see a lot of benefit from exercises like this to allow us to, perhaps, move into other areas that will allow us to cooperate,&#8221; Crenshaw said, after watching U.S. and host nation medical personnel at work.

During the relief portion of the exercise, U.S. servicemembers provided medical care to seven sites &#8212; most of them tiny hamlets scattered throughout the desert. Doctors performed everything from eye exams to plastic surgery.

In Zaouia Aoufous, a small town nestled in a fertile valley known for its sweet dates, farmers and families from the outlying areas flocked to a school to be seen by doctors and nurses. They began lining up in the hot sun as the medical group set up a makeshift clinic in classrooms and tents.

Alaoni Chrifa arrived so doctors could check out her chronic cough. She talked glowingly of the doctors as she waited for some medicine, which was given to the patients for free.

Sadiki Hassne, president of a local social group for women and children, said it was &#8220;overwhelming&#8221; to see the dozens of American and Moroccan military doctors and nurses treating everyone.

Residents in rural Morocco rarely see a doctor because clinics are so far away or because they don&#8217;t have the money. But even those who travel dozens of miles by foot or on horseback to the nearest hospital often find doctors without the latest equipment or who are short on some basic medical supplies.

Cmdr. Gordon Green, a surgeon stationed in Rota, said there is no shortage of people who need care.

Doctors and nurses have been surprised by the number of people seeking help during their visits to local towns. The annual exercise rotates among African countries, allowing medical personnel to provide humanitarian aid and train alongside host nation doctors and nurses.

With the help of their Moroccan counterparts, those participating in the exercise have by far exceeded their initial goals.

In addition, eye doctors completed 200 surgeries &#8212; 142 of them were for cataracts. One surgeon removed a ball of fat from a patient&#8217;s leg to create a fake eye that used existing muscles to move in unison with the healthy eye.

At one point, dentists became so busy pulling teeth that they limited the number of teeth yanked per person to four. During one visit, they would pry the teeth out and just shuck them to the floor to keep up with demand.

By the end of the exercise, surgeons removed 1,200 teeth &#8212; additional evidence that brushing is not part of the morning routine around these parts.

The amount and quality of care provided did not go unnoticed. Some Moroccans went to extraordinary lengths to show their appreciation.

Lt. Cmdr. Tom Craig, an emergency room doctor in Rota, prescribed some Prozac to one man who complained that he was too nervous to function normally. After the man got the medication, he traveled dozens of miles over the rough terrain several days later just to thank the Navy doctor.

Military medical teams conduct numerous humanitarian missions in Africa each year. The next operation is planned in Morocco for the spring.

U.S. military doctors and nurses arrived in Morocco for an exercise earlier this month with more than their medical expertise and a willingness to treat hundreds of needy people.

Before many of them landed in Er Rachidia, three large C-5 Galaxy cargo planes from Naval Station Rota, Spain, brought 250,000 pounds of medical equipment, ranging from surgical gloves to catheters.

The Navy bought some of the supplies just for the exercise and humanitarian operation. But the vast majority came from a surplus available after the war against Iraq.

The ship alone gave away $500,000 worth of items, including cases of baby formula, scrubs and linens. The more than 100 American servicemembers who participated in the exercise dished out some of the equipment while conducting humanitarian missions in small, rural towns in the province.

But there is still a lot left over.

More than half of what was brought is sitting in a warehouse at a Moroccan military base.

The Moroccan base doctor in Er Rachidia said his military clinic has only two stethoscopes. He has made several trips to the warehouse to stock up on supplies. The rest of the equipment will go to area hospitals.