‘MedEx’ ready for it all 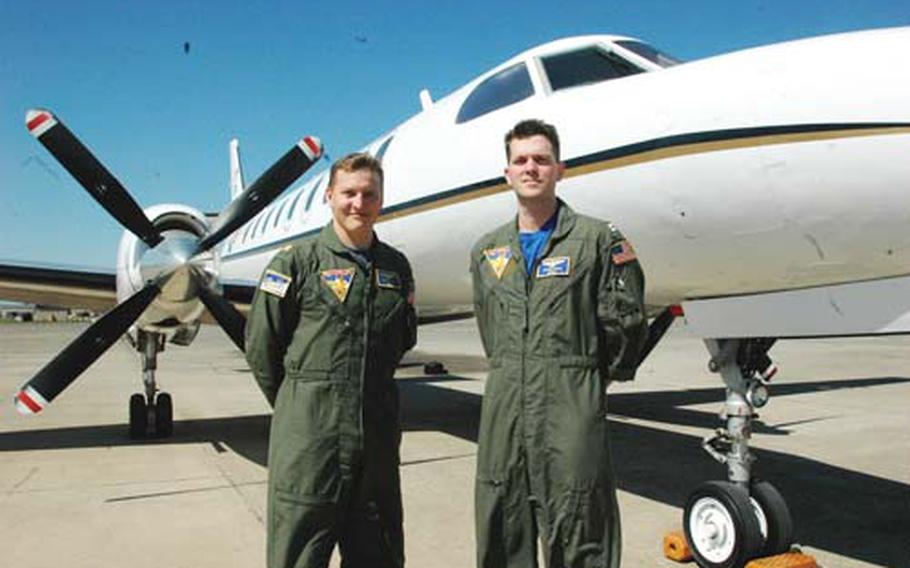 Lt. Cmdr. Bill Roark, left, and Lt. Danny Abad, both Navy pilots, stand in front of one of two C-26 Metroliner aircraft stationed at Naval Air Station Sigonella, Sicily. The aircraft are used for rapid transport of passengers and cargo through the European theater. Two other aircraft are based in Naples, Italy. (Sandra Jontz / S&S)

NAVAL AIR STATION SIGONELLA, Sicily &#8211; There isn&#8217;t much that is sexy or glamorous about the job they do, said U.S. Navy pilot Lt. Cmdr. Bill Roark.

The squadron of pilots and five aircrew fly two C-26 turboprop engine aircraft, ferrying anything from VIPs to troops en route to training and cargo consisting of weapons, needed ship parts or hazardous materials, to name a few.

Once, Roark had to fly a military working dog from Sigonella to Souda Bay, Crete, a rare passenger for the crew, he said. En route, the anxious dog managed to slip from his crate, slither through a flap separating the cargo hold from the main cabin, and sit next to his handler, he recalled.

On his way back, Roark transported another dog.

The U.S. Navy&#8217;s C-26 fleets are located in Europe and Hawaii. The four C-26D aircraft in Europe &#8212; two each at Sigonella and Naples, Italy &#8212; provide rapid-response cargo and passenger transportation.

The Sigonella-based crews have flown as far north as Norway, as far south as Morocco and as far east as Turkey, trips that average from two to four hours or so.

Years ago, the Navy divested its fleet of C-12 Beechcraft airplanes in Europe for the larger C-26 Metroliners, a cost-saving measure since the C-26s consume roughly the same amount of fuel but can transport larger cargo loads and more passengers, said Roark, 43.

Hopping a flight with the Naples-based crew &#8212; who fly more flag officers and VIPs &#8212; offers passengers a luxury not available on the Sigonella-based aircraft: toilets.

"We always tell passengers to take care of business before they board," Roark said.

In the event of a need-to-go-now emergency, they have a backup plan. They&#8217;re called "piddle packs," explained fellow pilot Lt. Danny Abad, 29. The bags are stuffed with the same material found in diapers.

The crews are busy, flying as many as four or five days a week, they said.

And when possible, they transport space-available passengers between Navy bases throughout Europe.