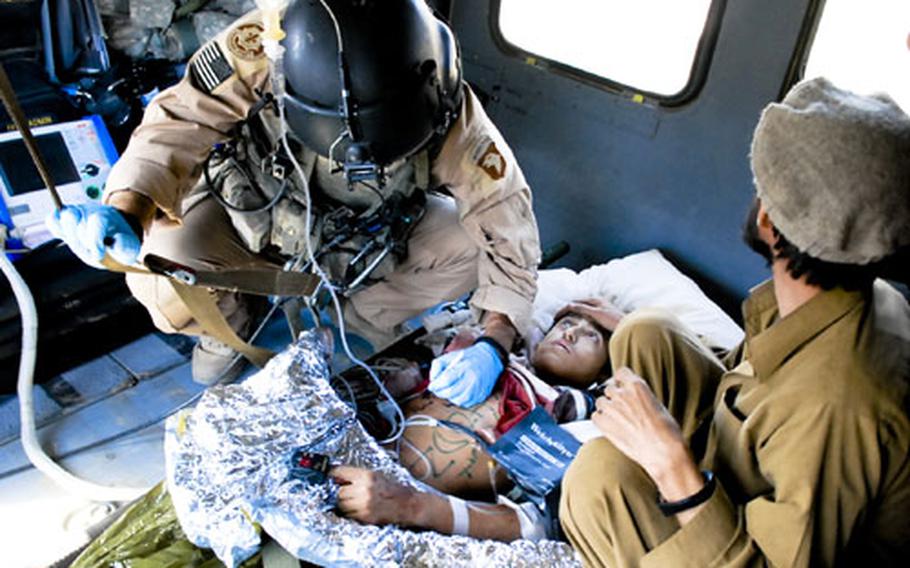 Staff Sgt. Matthew Kinney, a flight medic, writes vital statistics on the chest of an Afghan teen-ager injured by shrapnel during an insurgent attack on a U.S. outpost. (Michael Gisick / Stripes)

Staff Sgt. Matthew Kinney, a flight medic, writes vital statistics on the chest of an Afghan teen-ager injured by shrapnel during an insurgent attack on a U.S. outpost. (Michael Gisick / Stripes) 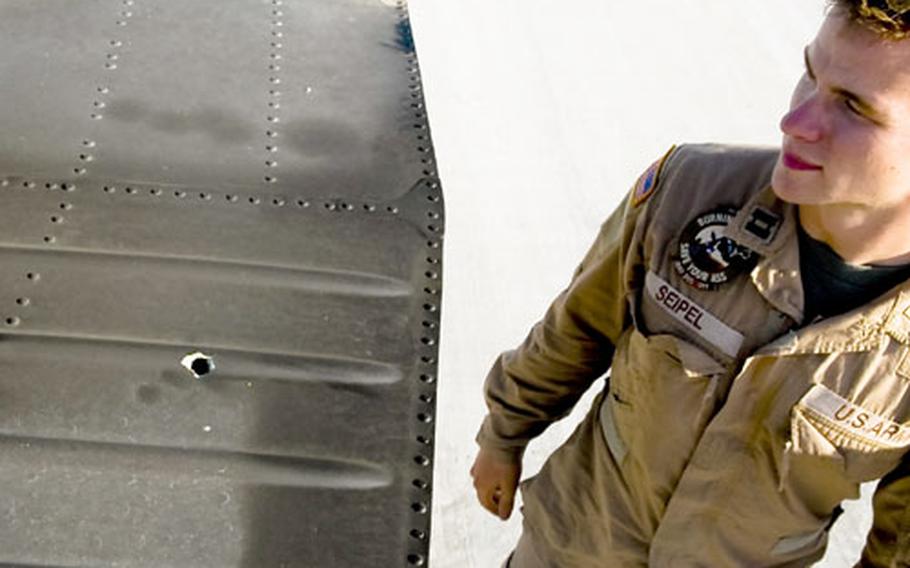 Capt. Ben Seipel, a helicopter medevac pilot based in Jalalabad, inspects a bullet hole in the tail of his Black Hawk helicopter after a mission to pick up a wounded soldier in Konar Province. U.S. medevac helicopters regularly come under fire from insurgents and also face more exotic threats, including wires strung between mountain peaks in an effort to snag the aircraft. The medevac helicopters are usually accompanied by Apache gunships but themselves go unarmed, with red crosses painted on the doors. "The Geneva Conventions were definitely violated again," Seipel joked. (Michael Gisick / Stripes) 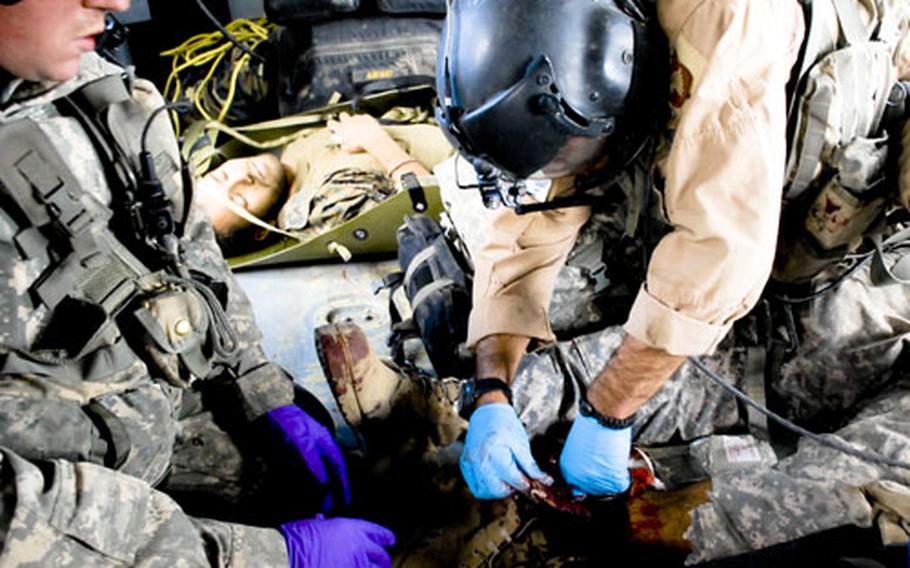 Staff Sgt. Matthew Kinney, a flight medic, treats a wounded U.S. soldier while Staff Sgt. James Frailey, a helicopter crew chief, looks on. The soldier was wounded after his patrol came under fire from insurgents and was apparently hit by an errant U.S. mortar round, the military said. One U.S. soldier was killed. An Afghan soldier, in the rear, was wounded. (Michael Gisick / Stripes) 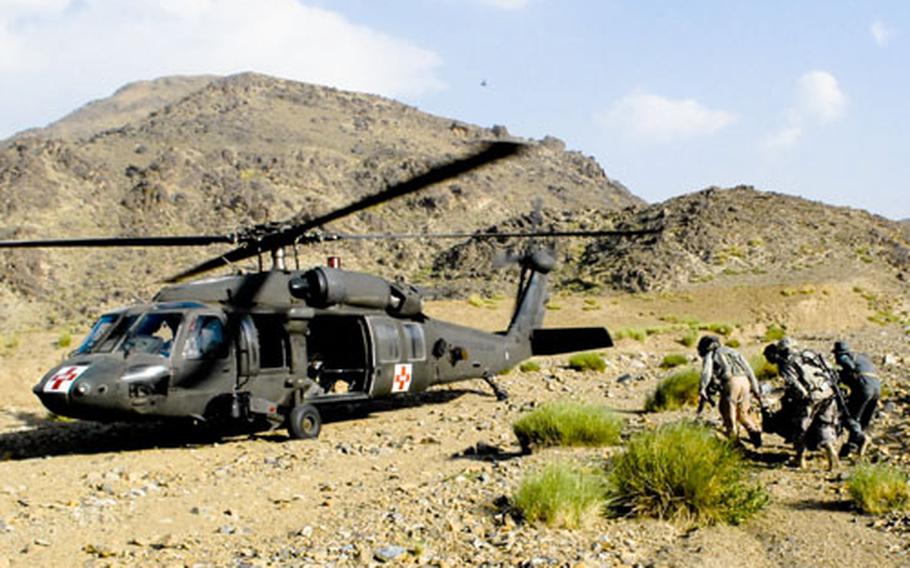 U.S. troops and an Afghan policeman carry the body of a U.S. soldier killed in a roadside bombing to a waiting helicopter. (Michael Gisick / Stripes) 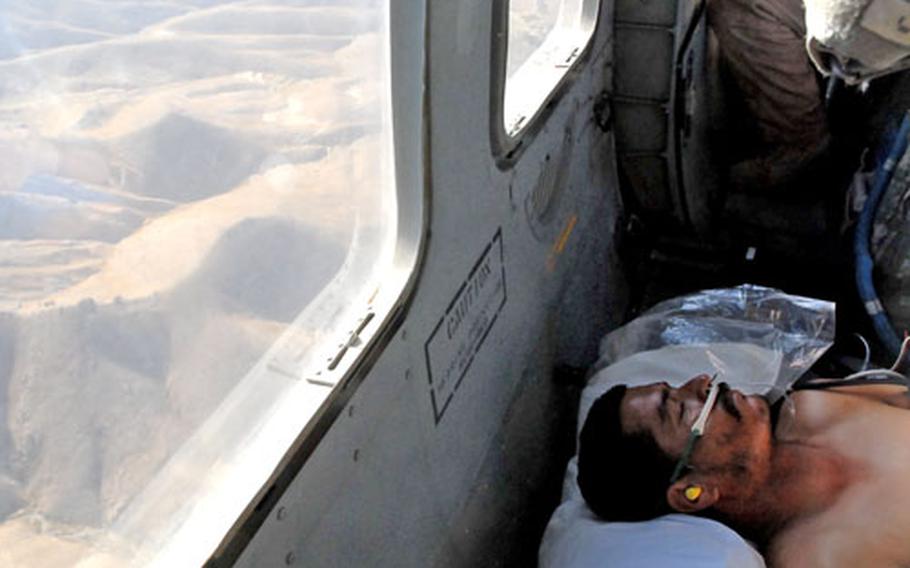 An Afghan soldier wounded by mortar fire is evacuated to a U.S. hospital at Bagram Airfield. More than half of U.S. medevac flights are made to evacuate Afghan security personnel and civilians. With little medical infrastructure outside Kabul, the flights often pick up patients in advanced stages of treatable illnesses, though combat injuries, car accidents and even attacks by wild animals also contribute to the toll. Patients requiring extended medical are usually brought to Bagram, home to a large U.S. hospital. (Michael Gisick / Stripes)

JALALABAD, Afghanistan &mdash; A few minutes earlier they were standing in line for breakfast at the crowded chow hall, reconstituted eggs puddled on the griddle, coffee warming the Styrofoam in their hands. Then the walkie-talkies clipped to their pockets started talking to them. Now the two air medic crews are pounding north into the other side of the war in Afghanistan, their helicopters banking down over the pine-covered mountains of Kunar province&rsquo;s bad-legend Korengal Valley. The red trail of a smoke grenade rises from among the earthen roofs of a village packed between the valley walls. Not far away stands a column of black smoke marking where, in retrospect, the military said a U.S. and Afghan army patrol caught in a firefight was hit by an errant American mortar round.

The beleaguered patrol is holed up in a compound in the middle of the village, still taking fire. One U.S. soldier had been killed by the mortar. A half-dozen other soldiers &mdash; U.S. and Afghan &mdash; are wounded. The Apache gunships escorting the medical birds break off and begin firing at the muzzle flashes on the mountainsides. They produce a lull.

The first medevac helicopter circles down, kicking up a storm of dust and scattering the red smoke. There is nowhere to land and the pilot hovers at 50 meters as the medic, Staff Sgt. Bradley Robbins, attaches himself to a winch and swings out through the open door. A crew chief with a remote control lowers him to the ground, where Robbins unclips the winch-line and goes to work. The bird cycles out and the second flight moves in, dropping off its medic, Staff Sgt. Matthew Kinney.

The gunfire picks up again, slapping down into the courtyard. The first helicopter returns for Robbins, but by the time he&rsquo;s hoisted up two litter patients and attaches himself to the winch line, the pilot, Chief Warrant Officer 2 Wayne McDonald, decides there&rsquo;s no more time to wait.

They can see bullets hitting the ground nearby and think they could feel them hitting the helicopter, and later they find a half-dozen bullet holes in the bird and one in the rotor blade. So they pull out of there with Robbins still dangling from the line.

"It was like a roller coaster," Robbins says later, but thinks better of the comparison. "Actually, more like a fair ride."

That leaves Kinney alone on the ground with the rest of the wounded and the rattled survivors. They try to persuade him to evacuate the dead soldier, but there are protocols. And besides, there isn&rsquo;t room.

Two more have been shot since the medics arrived, so now he has five to bring out, one by one, on the winch line, then himself, the bullets coming in from two or three directions, he can&rsquo;t tell. His rifle lies on the ground beside him as he works. It&rsquo;s 9:30 in the morning in one of the most dangerous, most beautiful places in the world. He&rsquo;s staying in the moment, letting out a steady stream of cuss words.

This is not an entirely typical October morning for the medevac platoon based in Jalalabad, part of the 101st Aviation Regiment, whose motto is "Burning gas to save your ass." Some days they breakfast in peace, the walkie-talkies quiet, and they smoke cigars in the evening with the Apache pilots. But it has been a year of hard fighting at many of the U.S. outposts scattered in northeastern Afghanistan, and the medevac platoon has been there for the worst of it.

There was little anywhere else to prepare them for this, really. None of the medics had done a real-world hoist mission before they arrived. Few had been shot at. Many had deployed to Iraq, but that was nothing compared to this.

Nothing, for example, like the morning in July when they flew into Wanat after nine U.S. soldiers were killed during a brazen, large-scale attack on a patrol base. The insurgents&rsquo; fire was still lighting up the mountainside as if there were some huge invasion of flash photographers.

The medics try to take a clinical approach, which offers a certain detachment. Anyway, they don&rsquo;t know how many people they&rsquo;ve saved or how many they haven&rsquo;t because they don&rsquo;t know what happens after a patient leaves their aircraft. Leaving it that way is a recommended coping strategy, but some of the medics still wish they knew.

Kinney got an e-mail once from one of the soldiers he pulled out of Wanat. The soldier told him it was the most amazing thing he&rsquo;d ever seen, the way they had come for them. But that was a rarity.

Still, they don&rsquo;t need Hallmark cards to feel like they&rsquo;re making a difference, and anyway most admit they feel addicted to the adrenaline.

"Over here, I pretty much know what&rsquo;s wrong with my patients," Kinney says. "It&rsquo;s usually pretty obvious. It&rsquo;s just up to me to get my job done and try to help them."

His wife is a nurse and sometimes she tells him about her patients, people with ailments buried deep in their bodies or their psyches. He can&rsquo;t imagine how she deals with that.

Two days before the Korengal mission, another crew was called out after a U.S. convoy hit a roadside bomb in Kunar province. It was a convoy of heavily armored Mine Resistant Ambush Protected vehicles, designed to survive. But there was a Humvee in the middle of the convoy, where the blast had hit.

What was left of it &mdash; a charred frame and some bits of twisted metal &mdash; looked more like the remnant of a bombed swing set than a military vehicle. Three of the occupants were killed and lay on the ground where they&rsquo;d been thrown. A fourth was alive but drifting in root reflexes, eyes shut.

There was some gunfire. Possibly some of the soldiers were hunting down a triggerman, who might have been in a tree. Or that was the story Sgt. Adam Connaughton, a medic, picked up from one of the soldiers standing near the bodies, though it was kind of scattered.

That was a commonality about arriving at scenes like this, Connaughton and other medics said.

"I was talking to the guy and it was like he was there, but he wasn&rsquo;t always there. It was like they were all shell-shocked, couldn&rsquo;t believe what just happened. I&rsquo;ve seen that a couple times."

Capt. Justin Madill, the platoon&rsquo;s flight surgeon, knelt over one of the three killed in action. The other two were obviously dead, but Madill stayed with this one, trying to find a pulse or some response, slapping him on the face and the chest. He got nothing. They hustled the surviving casualty to the helicopter and left &mdash; they got him back alive &mdash; but Madill was still thinking about it the next day.

"I tend to think as if I were in a major medical center and not on the battlefield," he says. "As a doctor, you know, we left him there ... . And coming back I was thinking, I am 99.5 percent sure that that individual was dead, but in the back of my mind there&rsquo;s a little sliver that&rsquo;s thinking, &lsquo;What if?&rsquo; "

When the adrenaline fades, other things linger.

"You get caught up in the moment," Connaughton says. "But after all is said and done, you know ... it hurts."

There aren&rsquo;t a lot of ways to blow off steam. After a tough mission, Connaughton sometimes takes himself out for pizza, his favorite food, at the airfield&rsquo;s trailer-ized Pizza Hut. Otherwise, there&rsquo;s the gym and video games. The medics don&rsquo;t talk to their families about what they&rsquo;re doing in any detail.

They do talk to one another. Along the way they pick up a lot of Afghan children &mdash; kids dying of treatable diseases, kids who&rsquo;ve fallen off the roof, kids hit by cars. And there&rsquo;s one common conversational topic: What do they find more upsetting, hurt kids or hurt Americans? Both, obviously, but it&rsquo;s not so much an abstract question as an experiential inquiry: which was actually more upsetting.

But if they&rsquo;ve seen some horrible things, at least none of that was their fault.

"We&rsquo;ll walk away with some memories that we probably wish we didn&rsquo;t have," says the platoon leader, Capt. Ben Seipel. "But at the end of the day, you really can&rsquo;t beat what we do. Going out flying and knowing that you&rsquo;re saving lives, it doesn&rsquo;t get any more rewarding than that."

And there is also the other thing. Connaughton felt it after his second mission, left behind by his damaged helicopter &mdash; realizing he was running across the rocky ground and getting shot at for the first time, moments later carrying a soldier with a blown-off leg across a river to a second bird.

It was "pure amazement," he says. It was something he thought could never happen. And he&rsquo;s talking about himself.