‘Medal of Honor’ series is veteran-made, from lighting to action 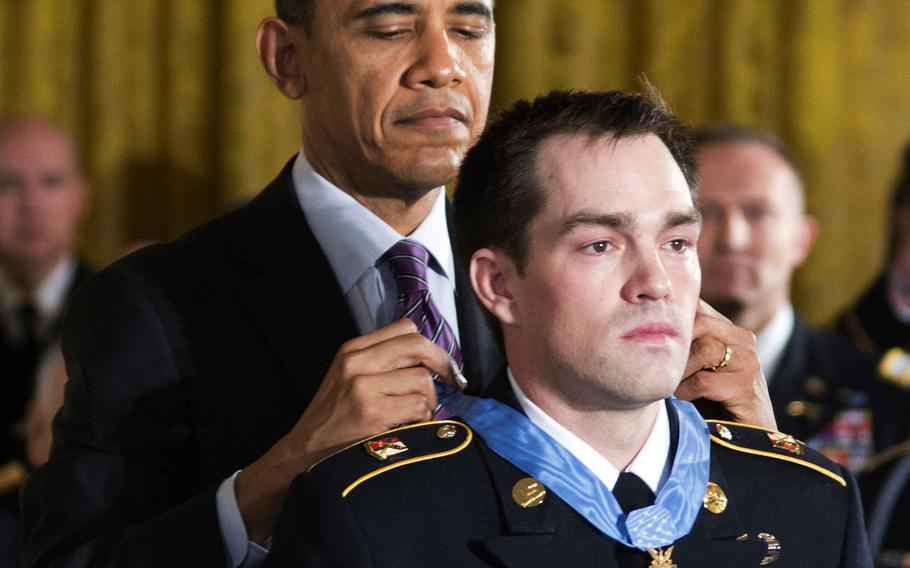 The makers of Netflix’s “Medal of Honor” documentary series, which became available for streaming earlier this month, sought out veterans to help tell the stories of eight recipients of the country’s highest military award, spanning five wars and three branches of service.

“We had veterans working on set, as many as we could, from cameras to lighting to wardrobe to makeup, everything we could put a veteran in, we tried our best,” Brandon Birtell, a Marine veteran and executive producer of the series, said in a phone interview. “We wanted it to be authentic ... and to create those opportunities. I’m a product of those opportunities.”

Featuring interviews and archival footage, as well as scripted recreations, it aims to tell the stories of military heroism in a way wider audiences will find compelling.

The series arrives at a time when few Americans serve or know someone who has, and many may not know what the Medal of Honor is or how it is earned, people involved in the production said.

The producers hope these eight stories will inspire new generations of Americans and that they’ll be able to continue telling stories of the more than 3,500 Americans who have received the award since Abraham Lincoln created it in 1861.

“These are stories that need to be told,” said executive producer James Moll, an Oscar, Grammy, and Emmy award-winning filmmaker.

It’s also important that veterans help to tell these stories, said Clint Romesha, who was awarded the medal for his actions in the Battle of Kamdesh at Afghanistan’s Combat Outpost Keating. The show’s second episode profiles him — one of two Army soldiers bestowed a Medal of Honor for that October 2009 battle.

“We as veterans need to share more of our stories and do it in our own words,” he said. “If we’re not sharing our stories, we’re doing a great injustice to those that are never going to experience (military service and combat).”

Romesha had initially been concerned that the show’s reenactments might glorify his exploits in an over-the-top way and overlook how the story was about “love and overcoming and (moving) into the future.” But he said he was happy with the result, which offers a look not just at his life, but at his fellow soldiers from that deadly battle and how they’ve moved past the events of what was probably the worst days of their lives.

It also lets the others who served alongside him tell their stories, because it was for them that he risked his life and it’s on their behalf that he wears the Medal of Honor, Romesha said. “The love for your brothers is so strong that that’s the motivation,” he said.

Romesha credits Moll and Mike Dowling, a Marine Corps veteran of Iraq and co-founder of a nonprofit for veterans in the entertainment industry, who Moll brought on as a technical advisor, for listening closely and getting the story right.

Moll said Dowling was also instrumental in bringing on more veterans and engaging both the Defense Department and the Congressional Medal of Honor Society for their help in the production. He also helped weed out people who lied about their service in attempt to get hired, he said.

But while the production made a concerted effort to hire those who have served, veteran status wasn’t a free pass, said Nate Boyer, a Special Forces veteran and former NFL player who portrays a World War II soldier in the fifth episode, which profiles Medal of Honor recipient Vito Bertoldo.

“You had to earn the part, they didn’t just give the parts away. They gave us the opportunity (to audition),” Boyer said. “That’s all we ask for.”

The series also stars well-known actors, such as Ben Schwartz, known for portraying Jean-Ralphio Saperstein on the sitcom “Parks and Recreation,” who would consult the veterans about their portrayals to ensure authenticity. Schwartz plays Bertoldo.

When Trevor Carlee, an editor with more than a decade of experience in the industry, met with the producers about joining the production, he was nearly hired before he even mentioned having served in the Marines. He’d already been leaning toward doing more work to tell the stories of veterans, he told them.

“Working on this show amplified the meaning of the Medal of Honor to me,” Carlee said, adding that the reenactments bring the events to life and “get to your heart, makes you think about whether you’d have that courage.”

The producers also sought his insights as a veteran, which he feels helped improve the show. In one instance, there was an issue with a line of dialogue that came off as inauthentic, which Carlee noticed and helped edit.

The series itself was born from Birtell’s military experience and made possible by the skills and training he received in the service and in college on the G.I. Bill afterward, he said.

“I wouldn’t have achieved it if I hadn’t served,” said Birtell, who was inspired with the idea for the series while enduring Marine Corps boot camp in 1996.

The grueling final challenge for Marine recruits, known as the Crucible, is made up of obstacles named for Medal of Honor recipients and drill instructors retell their stories throughout the event.

“That was kind of the genesis,” he said. “I have a lot of admiration for these men and women and their service and sacrifice.”

Years later, Birtell and his cousin — his writing partner — teamed with Moll to bring the series into reality in what would become a nearly decade-long gauntlet to develop and sell it.

The series release coincided with the 100-year anniversary of the end of World War I, but that’s merely a coincidence, Birtell said. They spent nearly three years working on the production, he added.

One challenge along the way, familiar to many filmmakers, was getting a network’s interest. To Moll, who has made films about military chaplains and the Pacific theater of World War II, the series seemed like a no-brainer, but executives he pitched didn’t seem to get it until he went to Netflix.

Once the show was completed, episodes were screened for the three living Medal of Honor recipients profiled in the first season — Romesha, Ty Carter and Korean War veteran Hiroshi “Hershey” Miyamura.

Miyamura watched his episode alongside Joe Anello, one of the soldiers in his squad he is credited with saving. Miyamura, now in his early 90s, held off waves of attackers with hand-to-hand fighting and with machine gun fire, allowing his fellow soldiers to retreat before he was taken prisoner.

“He said we said everything he wanted to say and more,” Birtell said of Miyamura’s reaction to the screening. “That meant the world to me. That’s what it was all about.”