Medal of Honor recipient touring Germany to talk with troops 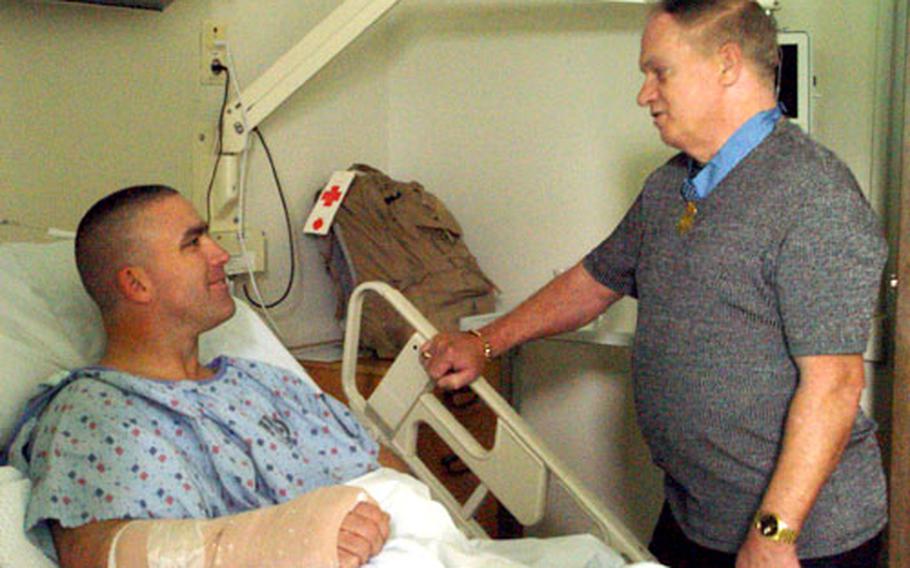 STUTTGART, Germany &#8212; None of the nearly 60 soldiers in the room likely served in Vietnam. But it didn&#8217;t take experience in jungle warfare to know John Baker had just made quite the understatement.

Baker, one of 123 living recipients of the Medal of Honor, is on a tour of Germany talking with troops this week. He was scheduled to visit wounded soldiers at Landstuhl Regional Medical Center and talk with soldiers in Heidelberg, W&#252;rzburg, Schweinfurt and Grafenw&#246;hr.

Baker received the award because of heroic acts he made as a 105-pound &#8220;tunnel rat&#8221; in the Vietnam War during a particularly bloody ambush near Cambodia in November of 1966. He is credited with dragging several soldiers to safety during the battle and returning to the fight.

During a question-and-answer session with European Command soldiers Monday, Baker said he supported the war in Iraq as a way to spread freedom in the world.

But he warned that the American public could turn against soldiers as it did in the Vietnam War if the conflict in Iraq drags on too long.

Baker drew applause while talking about his dislike for the American media and opposition to reporters in combat zones.

Asked about his opinion of women in combat, Baker said women contribute greatly to the military but do not belong on front lines.

Master Sgt. Janet Maresh said she disagreed with Baker&#8217;s opinion about women in combat but understood his position because he is from a different generation.

Receiving the Medal of Honor helped him land plush assignments such as a college speaking tour and campaign trips with President Bush and offered monetary incentives other soldiers do not get, Baker said. But it came with a price.