Medal of Honor recipient thanks troops 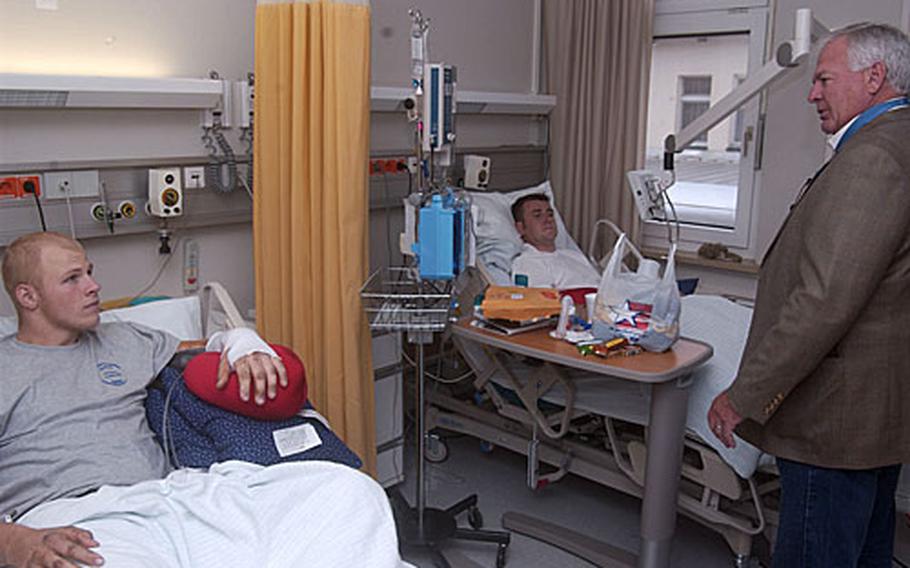 Medal of Honor recipient Mike Thornton chats with Army Spc. Carl Vandenberge, left, and Staff Sgt. Kevin Rice at Landstuhl Regional Medical Center. Thornton, who earned his Medal of Honor for a 1972 operation in Vietnam, thanked the soldiers and dozens of troops he met at the hospital for their service to the nation. (Steve Mraz / S&S)

Everyone who met Mike Thornton on Friday pretty much did the same thing &#8212; shook his outstretched hand, glanced at the medal hanging from his neck and said what an honor it was to meet him.

The medal hung from a light blue ribbon around Thornton&#8217;s neck and was instantly recognizable as the Medal of Honor, the highest military decoration given by the U.S. government.

Thornton, a former Navy SEAL who earned the medal for a 1972 operation in Vietnam, said again and again that it was his honor to be meeting the scores of troops as he visited Landstuhl Regional Medical Center.

Thornton, who was wounded 18 times during his military career, toured the hospital&#8217;s intensive care unit and several wards where wounded troops were recovering. He thanked them for their service to the country.

Thornton stopped anyone he could in the hospital hallways, thanking everyone for their service.

Those who met Thornton thanked him for what he did.

On Oct. 31, 1972, Thornton was part of a five-man mission in Vietnam. Learning that the Navy officer he was with had been hit and was believed to be dead, Thornton returned through a hail of fire to the lieutenant&#8217;s last position.

He quickly disposed of two enemy soldiers and succeeded in removing the seriously wounded and unconscious lieutenant to the water&#8217;s edge, according to published reports.

Thornton then inflated the lieutenant&#8217;s life jacket and towed him seaward for approximately two hours until picked up by support craft, according to an account of Thornton&#8217;s actions.