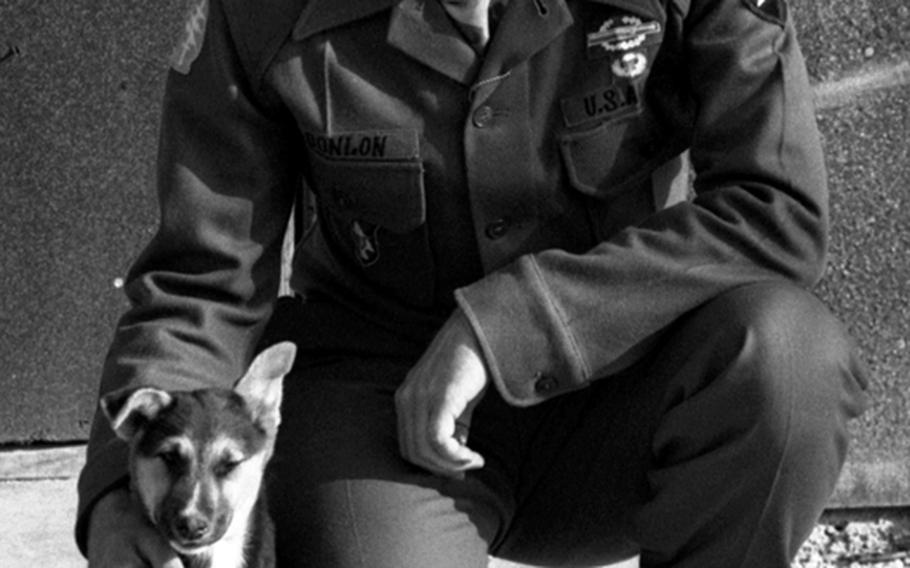 Buy Photo
Maj. Roger Donlon, the first Medal of Honor recipient in the Vietnam war, poses outside his headquarters tent at the Advanced Combat Training Academy. With him is the camp's mascot, "Lieutenant." (Peter MacQueen/Stars and Stripes)

Buy Photo
Maj. Roger Donlon, the first Medal of Honor recipient in the Vietnam war, poses outside his headquarters tent at the Advanced Combat Training Academy. With him is the camp's mascot, "Lieutenant." (Peter MacQueen/Stars and Stripes) Buy Photo
A sign at the Advanced Combat Training Academy in 1967. (Peter MacQueen ©Stars and Stripes) 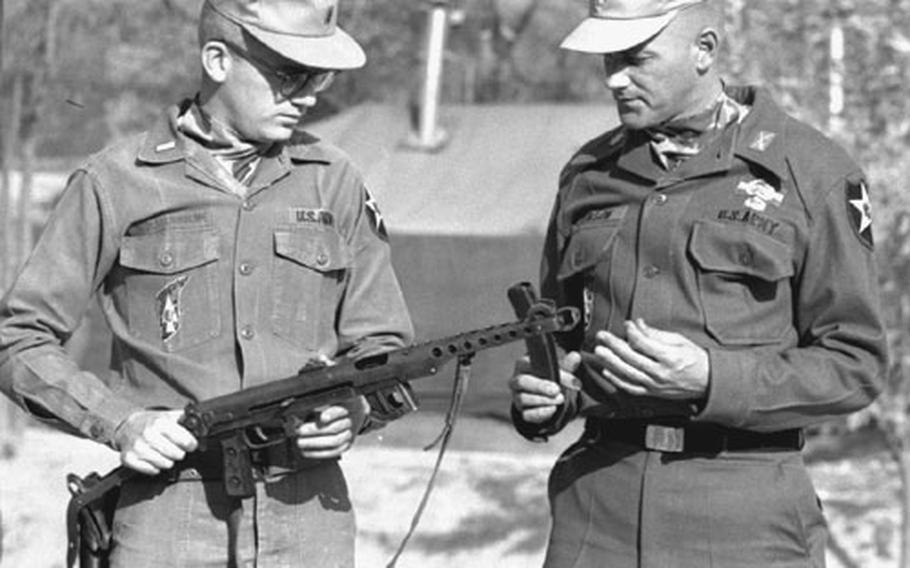 WITH THE U.S. 2ND INF. DIV., Korea - Maj. Roger Donlon looked with both bitterness and admiration at the mangled and blasted remains of what had been two large barracks.

It had been a fast, neat job of sabotage and killing - this Donlon had to admit. The North Korean commando team came in after dusk and went out before dawn, May 22, 1967. They had done their work with lethal efficiency and two American soldiers were dead in a heap of shattered rubble.

"At first," said Donlon, "you admire a professional job. Then it makes you mad."

The death and sabotage was one of the first sights to greet Donlon when he came into the U.S. 2nd Inf. Div. in May, a major for only two months.

You could spot him as a soldier anywhere. The close-cropped blond hair, the steady blue eyes, the set and determined features, the erect posture - it's all there, to mark Donlon's profession and trade.

But when Donlon came to Korea, he did not wear two distinctive marks of the career he chose several years ago. He left his green beret back in Vietnam when he left in 1964 as a severely-wounded casualty. And the blue, white-starred ribbon that marks him as a Medal of Honor winner is not worn on his plain, no-frills uniform. An all-business soldier, Donlon only wears his Combat Infantryman Badge.

Donlon, the first soldier to win America's highest award in the Vietnam War, is now in Korea. But the infiltration, terrorism and sudden death Donlon knew in another land are still part of his life. As a Special Forces man, he appraised the bombing with a coldly professional eye. As an American and a soldier, he felt grief and anger.

Where once the enemy was a stealthy little man named Charlie, who wore black pajamas and fought from waist-deep paddy slime, now Donlon must deal with an expertly silent intruder named Joe. Joe breaches barbed wire and creeps over dead, winter-browned farmland to blast sleeping men and attack frontline guard posts along the 18-mile sector of the Demilitarized Zone manned by Americans.

Joe deserves a very respectful kind of enmity and Donlon knows it. But Donlon feels that Joe has a long way to go before he can match the Vietnamese farmer who turns into a death-dealing guerrilla at dusk.

"They (the North Koreans) are well trained, and no doubt they're very professional. But they're not as good as the Viet Cong - not yet. If you look at that one incident, yes, they did a job. They're just not as tough and smart as Charlie, though. And there's not as many of them, thank God."

Donlon is commander of the division's Advanced Combat Training Academy at Camp Sitman. The name might stir visions of Belvoir or Benning. But the campus is just a colony of tents on a bare and rugged rise, a short distance from the armed frontier facing North Korea. Around it are hills and flatlands stripped of cover. The area reminded Donlon of the Special Forces camp at Nam Dong, 370 miles northeast of Saigon. While remote and isolated, it was so seldom bothered by the Viet Cong that fellow Green Beret wearers ribbed Donlon and his A-team about being assigned to a "vacation land."

On June 6, 1964, some 500 Viet Cong regulars hit it in force. Donlon, despite wounds in the stomach, leg, shoulder and face, blasted the attackers with his M16 rifle and moved among his American-South Vietnamese garrison, directing a costly hand-to-hand defense.

Finally, the Communists broke off the attack and retreated. Six months later, Donlon stood at stiff and nervous attention as the President of the United States draped the Medal of Honor around his neck.

He says nothing about himself and very little about the battle, except to praise the men who were with him - the ones who came out, the ones who did not. But others say much of the valor shown by Donlon.

Turning aside a question about himself, Donlon instead may quietly turn your attention to a sign in front of his command post. It tells of how a 2nd Div. soldier, Sgt. William S. Sitman, stood almost alone against a charging swarm of Chinese Communists during the Korean War and saved his buddies' lives by throwing himself on an exploding grenade.

Donlon is "dean" of a tough academy, and has made it so himself. He looks upon it as a whetstone to sharpen the basic skills of an infantryman and a millstream to glean the gold of leadership where it can be found. Everything centers around operations in the DMZ - the tense job of watching, snaring infiltrators, keeping disciplined nerves and warding off the attacks that have killed 21 Americans in a year.

One hundred and fifty men at a time go through the most rigorous 19 days Donlon can devise for them - river crossings, mountain climbing, adjusting artillery fire, and actual patrolling along the zone.

Donlon believes in personal leadership and graphic example. His first students saw half a dozen mamushi snakes he had snared and thrown into a cage. A sign on the cage warned the wide-eyed students, "Know Your Enemy," and compared the slithering mamushi with Joe - also a stealthy, short-range killer.

Donlon's students will know what an enemy weapon sounds like. He takes them out at night and fires bursts from a Russian-made PPS-1.

How did he come by the weapon? Donlon tells how one of the 43 members of his hand-picked faculty, a sergeant, led 10 students out on a patrol one night, They ran right into an infiltrating North Korean patrol.

"Their weapons went south and they went north," Donlon relates. "1 got me a whole pile of training aids."

Another of Donlon's sergeants warned his students to step carefully around the line, still seeded with landmines left over from the war days. He demonstrated his point that very night by stepping on a shrapnel-throwing Bouncing Betty, depressing one prong of a rusty detonator. The mine did not explode.

"That man volunteered to read the text at the next chaplain's call," Donlon recalls.

Donlon had one controversial policy in effect months before he went through the formality of getting permission from his battalion commander. Some of his classes, he noted, were all young lieutenants - eager, fresh-faced graduates from Officers Candidate School.

For one night, they are demoted to privates. Donlon drops them into foxholes right along the line. Anything can happen during the long night - harassment, contact with infiltrators, an attack by an enemy killer team.

"One youngster asked me, `Officers in foxholes?' I told him, 'Sure. When one of your men tells you he heard something out there, you'll know what he's talking about.' "

One other officer swore somebody was throwing rocks at him. Smiling thinly, Donlon replied: "You'll know when one of your privates tells you." It was a point well made; the North Koreans often throw rocks as they try to rattle men on line into opening up and exposing their positions.

"We work all our students pretty hard," Donlon says, "but nobody ever died from overwork. You can die from not being worked hard enough."

Donlon rarely relaxes. There is too much hard-learned knowledge to pass along. He can be seen most of the time striding around the campus with the academy mascot, a scruffy-looking pup named Lieutenant, trailing at his heels. There is always a class to teach, a field problem to critique, a training schedule to revise.

When Donlon does sit down for a cup of coffee, it will likely he with Sgt. 1.C. Robert L. Mahaffey, a 35-year-old veteran of two wars who is Donlon's Tactics Committee chief.

There is little relaxed, purposeless conversation. The topic is how the training can be improved - how it can he made tougher and more instructive.

Donlon's attention is turned for a moment to a week-old copy of Pacific Stars and Stripes. It tells of a massive demonstration outside the Pentagon, opposing U.S. involvement in Vietnam.

"I'm glad I wasn't there," says Donlon reflectively. "I would have really been in trouble. I don't know what's the matter with those people. If someone hadn't gone with us, into Korea, Vietnam and every other war we had to fight, we wouldn't be here.

"Those students. When do they study? I know one Korean soldier I'd trade for every one of them. He had a year of college before he went in. He's a soldier now but he still studies English whenever he can. Picks it out of newspapers and off the radio listening to AFKN (American Forces Korea Network). He learned President Kennedy's whole inaugural address and can recite it to you."

Donlon is a hero in the Alvin York and Audio Murphy mold. He came from a large, poor family in upstate New York. All of his four brothers have served in the military and one, an Air Force technical sergeant, is stationed in Thailand. One of three sisters keeps an encyclopedia-sized scrapbook on Donlon.