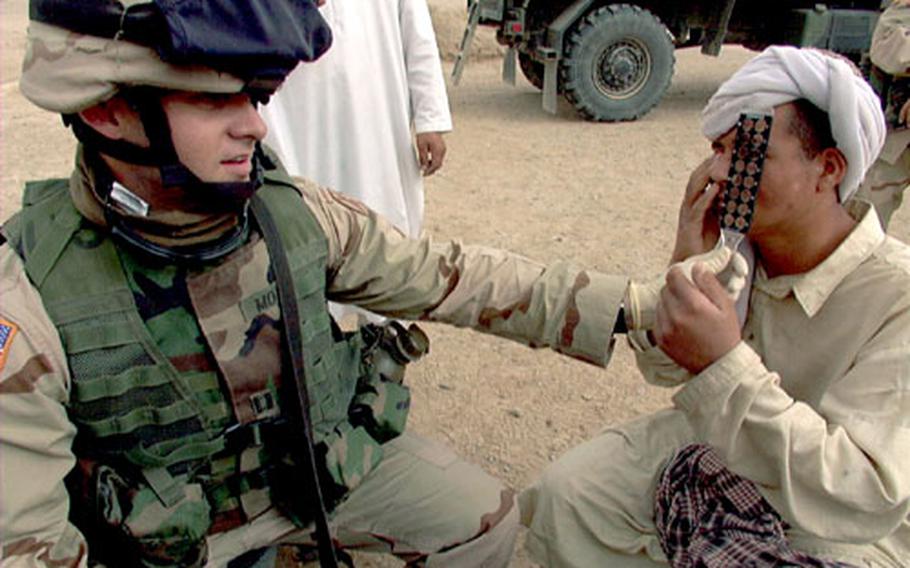 Optometrist Capt. Jason Moyer gives an eye exam to a young patient Tuesday in Raibi Kalasha, Afghanistan. The optometry clinic at Kandahar Airfield can make glasses for the villagers and send them out with civil affairs teams, Moyer said. (Rick Emert / S&S)

Optometrist Capt. Jason Moyer gives an eye exam to a young patient Tuesday in Raibi Kalasha, Afghanistan. The optometry clinic at Kandahar Airfield can make glasses for the villagers and send them out with civil affairs teams, Moyer said. (Rick Emert / S&S) 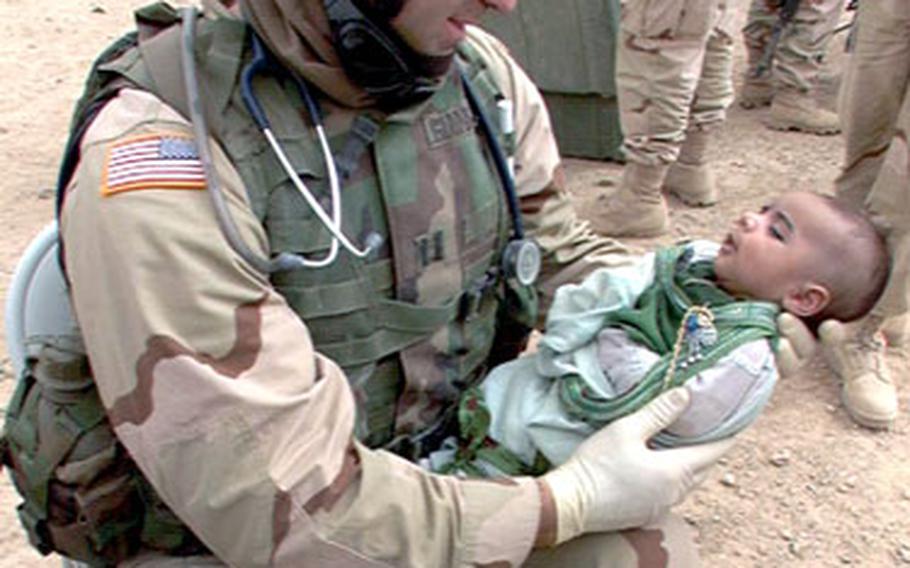 Capt. Louis Giangiulio, a pediatrician, examines a baby during a visit to the village of Raibi Kalasha, Afghanistan, on Tuesday. Giangiulio and other medical doctors examined about 250 patients at aid stations outside the village walls. (Rick Emert / S&S) 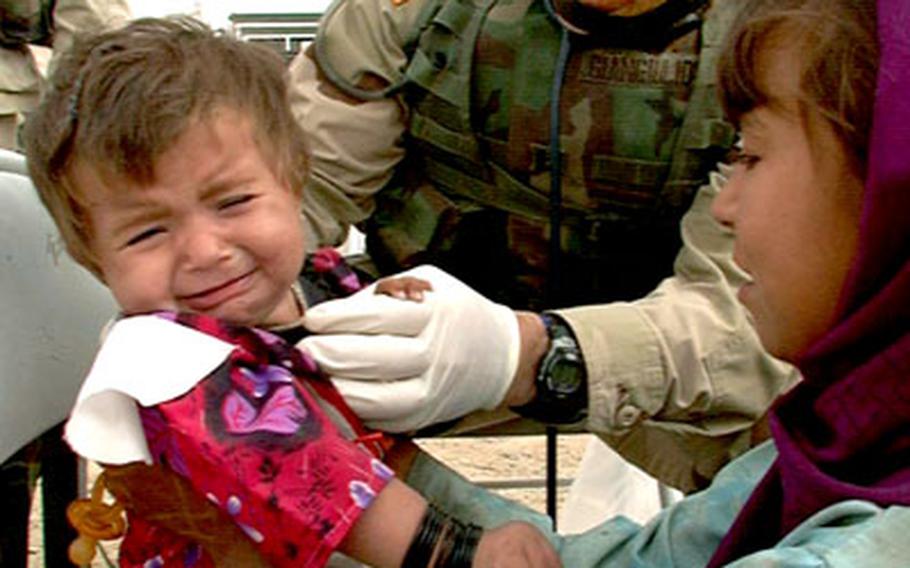 RAIBI KALASHA, Afghanistan &#8212; American and Romanian doctors will go to great lengths &#8212; even driving through mine fields if necessary &#8212; to make house calls in Afghanistan.

A team of five American and Romanian medical doctors and two American nurses took their medical bags on the road Tuesday to the village of Raibi Kalasha.

With security from two Romanian armored personnel carriers and two military police Humvees, the team spent half a day in the village, seeing about 250 patients. In one portion of the trip, the team traveled through a sandy field, with painted red rocks marking land mines as close as two or three feet to either side of the narrow road.

Civil affairs and psychological operations teams were part of the convoy as well.

While those teams met with a representative of the village leader, the medical teams set up their aid stations and began treating patients.

The medical teams, with the exception of the Romanian dentist &#8212; who extracted several teeth &#8212; weren&#8217;t prepared to perform surgeries. They brought medication for fever, rashes and gastrointestinal conditions, said Capt. Louis Giangiulio, a doctor at the Kandahar Airfield hospital.

Giangiulio, who is on his first deployment, made his initial civil medical assistance visit just last week. Over the coming months, he will visit one village each week in the Kandahar area, he said.

The doctors handed out medications and provided dosage directions through translators. Any patients complaining of eye problems were sent to the optometry team of Capt. Jason Moyer, an optometrist, and Spc. Sorta Lim, an optical fabrication technician, or lens maker.

&#8220;Most of them complain of dry eyes or, in the adult males, cataracts,&#8221; Moyer said. He had eye drops for the dry eyes, but patients with cataracts were told they needed surgery at the Kandahar city hospital, he said.

Moyer took down the names and lens prescriptions of the few patients who needed glasses and said he would send them with the next civil affairs team that visited the village.

The teams handed out thousands of multivitamins, as well as ibuprofen, antibiotics, eye and skin creams and cough medicine. Giangiulio said that the basic care helps, but the doctor in him wants to do more.