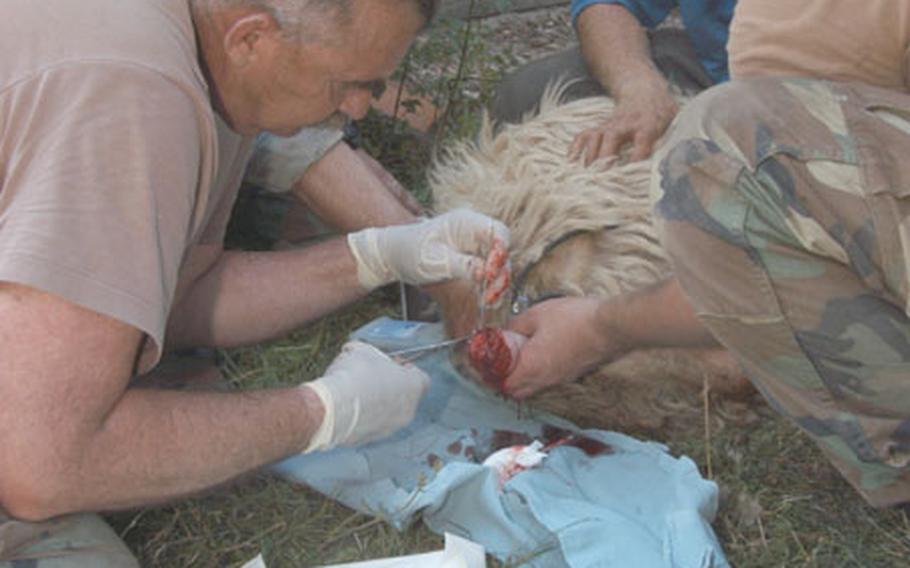 Capt. Bruce Lancaster, left, performs surgery on a sheep with the help of Spc. Scott Austin, right, during a Veterinary Civil Action Program in the village of Majdan, Bosnia and Herzegovina, on Thursday. Both men are with Task Force Med Eagle. (Ivana Avramovic / S&S)

Capt. Bruce Lancaster, left, performs surgery on a sheep with the help of Spc. Scott Austin, right, during a Veterinary Civil Action Program in the village of Majdan, Bosnia and Herzegovina, on Thursday. Both men are with Task Force Med Eagle. (Ivana Avramovic / S&S) 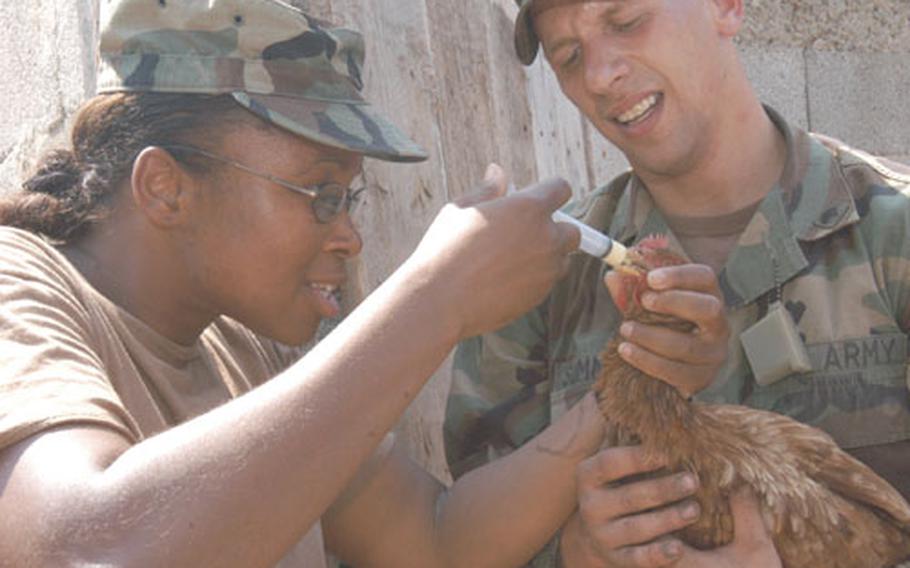 Staff Sgt. Kimberly Jordan of Task Force Med Eagle and Spc. Stephen Summers, a medic with Task Force South, give drops to a chicken during a Veterinary Civil Action Program in the village of Majdan, Bosnia and Herzegovina, on Thursday. (Ivana Avramovic / S&S) 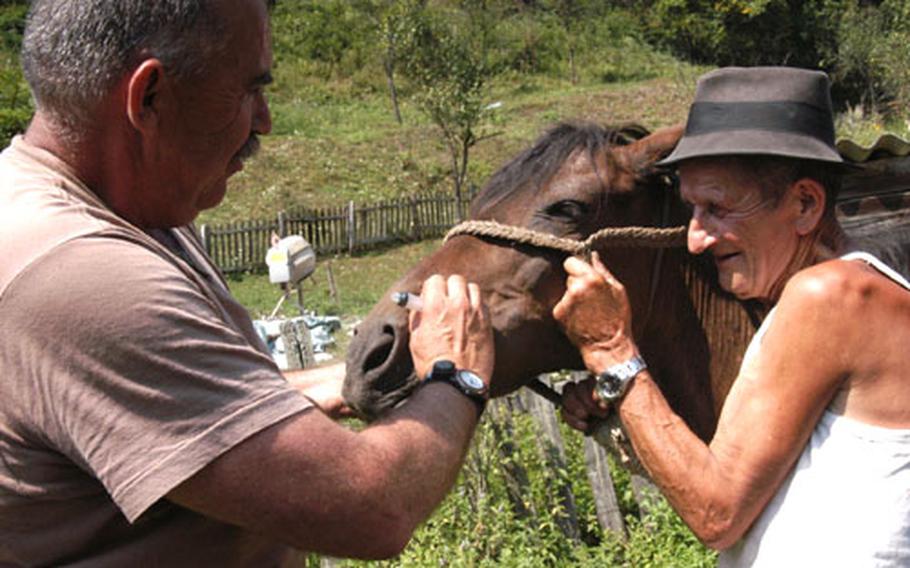 Capt. Bruce Lancaster, left, a veterinarian with Task Force Med Eagle, pets the horse of Dusan Bozic, right, after giving it a vaccine during Thursday&#39;s Veterinary Civil Action Program in the village of Majdan, Bosnia and Herzegovina. (Ivana Avramovic / S&S)

MAJDAN, Bosnia and Herzegovina &#8212; Two soldiers cornered a small flock of sheep from the left. They moved on to another yard, ran around the house and caught more than a dozen chicks. Next were the pigs.

So what were American soldiers doing chasing sheep, goats, chickens and pigs in the villages of Majdan and Lukici?

No, they were not trying to fetch dinner.

They mostly gave vaccines and drops to keep the animals worm-free, but Capt. Bruce Lancaster, the veterinarian with Task Force Med Eagle, also helped farmers single out sick animals in an effort to keep others healthy.

He even performed surgery on a sheep. The animal&#8217;s tail was broken and the owner wanted Lancaster to amputate it.

Chasing chickens, sheep and goats and holding them down to receive vaccines appeared easy. But to most city-raised people, going into tight, excrement-covered sties to capture pigs &#8212; some of them squealing &#8212; seemed very brave.

Spc. Stephen Summers, a medic with Task Force South, did not seem to mind the smell or getting his boots dirty. He jumped in to help.

&#8220;I love it. It&#8217;s so much fun,&#8221; said Spc. Scott Austin, a veterinary technician who works with dogs and cats in Denver. He is also an animal care specialist with Med Eagle who has spent the last five months at Eagle Base treating military working dogs.

When Dragomir Lipovac and his neighbors heard that an American veterinarian would be making the rounds, &#8220;we did not believe much that they would come,&#8221; he said.

But he kept his cows close to home that day instead of taking them out to a grazing field, just in case. And sure enough, the military came.

Instead of conducting another Medical Civil Assistance Program and providing basic health care to people, the military opted for treating animals this time, said civil affairs officer Capt. Bryan Tolar. The project aims to help the return to the area of Serbs who were displaced by the early 19902 war.

Lipovac returned to Majdan in April this year, but it was not the vibrant place with many families who owned livestock that he had remembered it being.

A veterinarian used to come to the village frequently before the war, but the last time one visited Majdan was last year. These days, it takes between $35 and $50 to bring one &#8212; most of the cost going toward travel expenses.

Farmers do not have transportation of their own to take the animals to a clinic, Lipovac said.

Rosa Bozic said she never had her livestock vaccinated because of the cost, even though vaccinations need to be done every six months to a year.

The cost of just over $10 per shot is extremely high for these people who have recently returned to their prewar homes and are living on very low incomes.

The troops gave more than 200 doses of medicine to the animals, costing a total of about $1,000.

The farmers were not only getting the best medicine for their animals, but also one of the best American veterinarians.

A member of the U.S. Army Reserve, Lancaster was Idaho&#8217;s veterinarian of the year in 2002. He is also the state&#8217;s representative for the American Veterinary Medical Association.

&#8220;I think it helps them most to treat the animals that feed them and help their living,&#8221; Lancaster said.