Mecha: Could it be the soldier of the future? 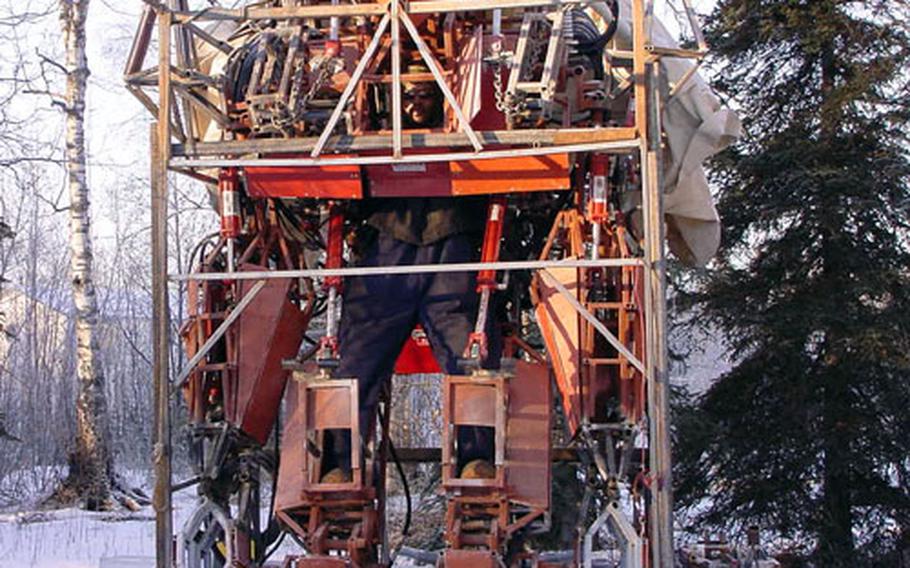 Carlos Owens, who is on the Army&#39;s inactive reserves, is building an 18-foot robot that he believes could be used on the battlefield. The robot, which has cost $15,000 to build so far, is capable of spitting fire and shooting spikes. (Photo courtesy of Carlos Owens)

The private first class uses some hydraulics training he learned in the Army as a heavy equipment mechanic, but mostly loads of imagination and gumption, to build an 18-foot &#8220;mecha&#8221; in the snows of his Wasilla, Alaska, back yard.

For those unversed in the world of Japanese anime, a mecha is a hulking robot with a human pilot inside. Owens soon plans to fire up his machine for walk testing. The 27-year-old believes his machine could fight wars, fight fires, or &#8212; at the very least &#8212; take on old Volkswagens for cheering crowds.

OK, laugh it up. But even the Pentagon wants robotic soldiers.

The concept isn&#8217;t entirely new: In the late &#8217;60s, General Electric designed a machine that would allow sailors on aircraft carriers to lift 1,500 pounds for loading bombs. Only one of machine&#8217;s arms worked, though, and it never saw sea duty.

Still today, from Wasilla to Washington, D.C., the dream is alive.

Owens runs a Web site, www.neogentronyx.com, and promises he&#8217;ll post a video of his baby taking its first steps. Owens started with scraps in 2003 and now has a full exoskeleton. He plans to debut it at a speedway this spring. But beyond car crushing &#8212; already the bread-and- butter of a 40-footer called Robosaurus &#8212; Owens sees real work for his machine. The prototype will fire flames and spikes, but one designed for the military could fire nastier munitions for urban combat.

&#8220;If you send a squad of these guys, you could just romp right through a forest fire, and put that sucker out from the inside. You could put on a hydraulic chain saw attachment.&#8221;

Small town dreamers and scientists agree that the future soldier runs on batteries.

The two sides are not, however, always pals.

Owens&#8217; project has cost $15,000 so far. He heckles the government&#8217;s Exoskeletons for Human Augmentation Project, which has spent $50 million on a venture with the University of California, Berkeley. That plan of the Defense Advanced Research Projects Agency aims to give soldiers leg braces to march longer distances carrying heavy loads. It&#8217;s called the Berkeley Lower Extremities Exoskeleton, or BLEEX.

Owens, who is in the inactive reserves, claims BLEEX costs too much money for too little muscle.

The folks at DARPA know of Owens, too.

&#8220;We&#8217;ve gotten a few calls about it,&#8221; says John Main, the scientist in charge of exoskeletons there. He forwarded questions to DARPA public affairs.

Spokeswoman Jan Walker says the battlebot in Alaska and the military&#8217;s project are &#8220;like apples and oranges.&#8221; The DARPA legs are supposed to function more with finesse and fluidity rather than crush and burn.

According to Program Executive Office Soldier, the Fort Belvoir, Va., command developing and fielding gear for the Army, today&#8217;s push is due to a draft proposal on warriors of the future.

A section of that Ground Soldier Capabilities Development Document calls for troops to &#8220;improve physical work performance&#8221; from an initial 50 percent to an eventual 200 percent.

&#8220;The Army is on a path to accelerate the development of the state-of-the-art exoskeleton technology to meet the soldier&#8217;s requirements and provide this capability to the field,&#8221; says Ross Guckert, director of systems integration at PEO Soldier, in an e-mail.

&#8220;I must say that his machine is years behind current exoskeleton developments, particularly in the areas of human-machine interface to control software, reduced power supply, safety, stability, agility, size and weight,&#8221; Guckert writes.

But Owens swears his frugal Frankenstein will see victory.

It&#8217;s just a prototype, he says, and future models could protect the wearer from chemical and biological attack. Mechas would move smoothly, like people.

Some could operate underwater. Some could go into space.

&#8220;I believe science fiction ties directly into reality through creativity.&#8221;