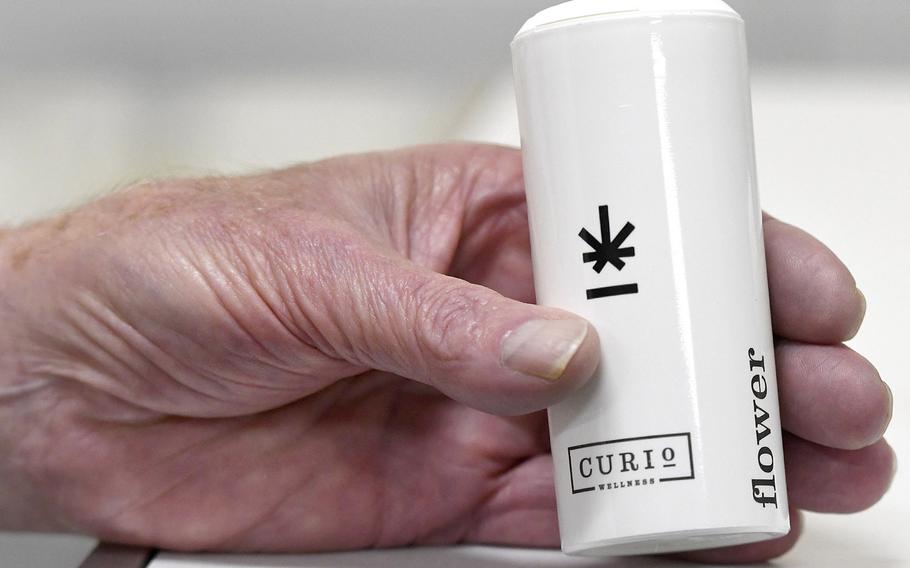 Jim Dunnigan, 84, holds a container of the medical marijuana he uses to treat his tremors, at Curio Wellness in Lutherville-Timonium, Md. Dunnigan uses the marijuana flower to make butter with which his wife bakes cookies for him to eat. (Steve Ruark, Baltimore Sun/TNS)

WASHINGTON – A measure to allow doctors at the Department of Veterans Affairs to recommend marijuana in states where it’s medically legal failed to make it into the final version of a VA funding bill for the third consecutive year.

Lawmakers on Monday released their VA funding agreement for fiscal 2019 following more than a month of debate between House and Senate negotiators. An amendment to expand veterans’ access to marijuana was removed from the annual budget bill during those negotiations.

The House is set to vote on the bill this week, ahead of the new fiscal year, which begins Oct 1.

“Denying veterans the care they need by the doctors they trust is shameful,” said Rep. Earl Blumenauer, D-Ore., who sponsored the amendment in the House. “This should have been a no-brainer. Yet, Republican leadership has once again stymied progress toward fair and equal treatment for our veterans.”

The amendment, which was approved this year by the Senate but not the House, would allow VA doctors to recommend marijuana to veterans who are eligible for it under state laws. Marijuana use for medical purposes is legal in 31 states.

The VA currently prohibits its doctors from completing forms for veterans that would admit them into medical marijuana programs.

The measure was part of recent efforts in Congress to give veterans easier access to marijuana, which has been posited by supporters as an alternative to addictive opioids. Some veterans contend marijuana effectively treats post-traumatic stress disorder and chronic pain.

Last week, Sens. Bill Nelson, D-Fla., and Brian Schatz, D-Hawaii, introduced the Veterans Medical Marijuana Safe Harbor Act. Similar to the amendment that failed to make it into the budget bill, the legislation would allow VA providers to register veterans for state marijuana programs. It goes further, making it legal for veterans to “use, possess, or transport medical marijuana” in those 31 states.

The bill also calls for $15 million for the VA to use to research marijuana’s effects on chronic pain and whether the drug is effective in reducing opioid abuse among veterans.

“Federal law prohibits VA doctors from prescribing or recommending medical marijuana to veterans,” Nelson said in a statement. “This legislation will allow veterans in Florida and elsewhere the same access to legitimately prescribed medication, just as any other patient in those 31 states would have.”

Another bill, the VA Medicinal Cannabis Research Act, aims to push the VA to initiate research. It has bipartisan support, and the House Committee on Veterans’ Affairs unanimously voted in May to send the bill to the full House.

The bills will likely face some opposition. VA Secretary Robert Wilkie, who took the job in July, hasn’t spoken publicly about marijuana as a potential treatment.

A bipartisan group of lawmakers sent a letter to him last week, urging him to initiate a “rigorous clinical trial” of the drug.