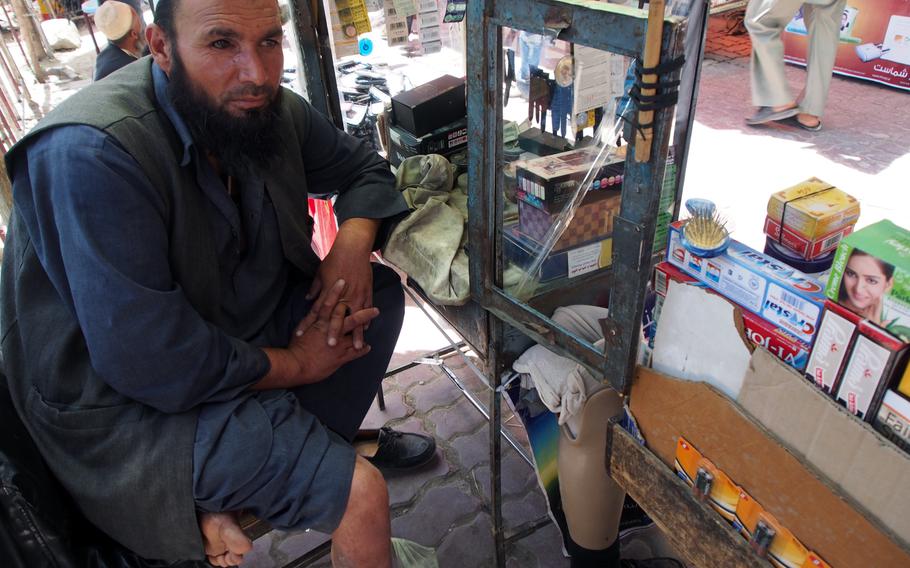 Safiullah, who lost his leg while fighting the Soviets, is one of many street vendors who have complained of harassment by Kabul municipal workers and police in the past few weeks. The city is cracking down on vendors in an effort to clear streets and sidewalks. (Heath Druzin/Stars and Stripes)

Safiullah, who lost his leg while fighting the Soviets, is one of many street vendors who have complained of harassment by Kabul municipal workers and police in the past few weeks. The city is cracking down on vendors in an effort to clear streets and sidewalks. (Heath Druzin/Stars and Stripes) 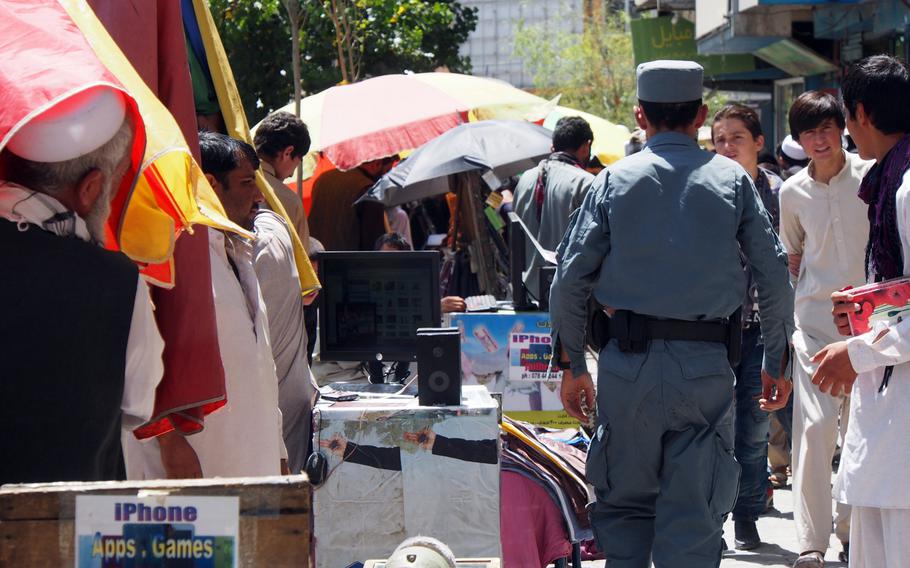 Street vendors watch a police officer walk away after he forced them to take down their umbrellas on a scorching summer afternoon in Kabul. Recently, city workers and police have been forcibly removing street vendors, many of whom are disabled or elderly, from spots seen to disrupt traffic or block pedestrian access to sidewalks. Vendors complain of heavy-handed tactics. (Heath Druzin/Stars and Stripes) 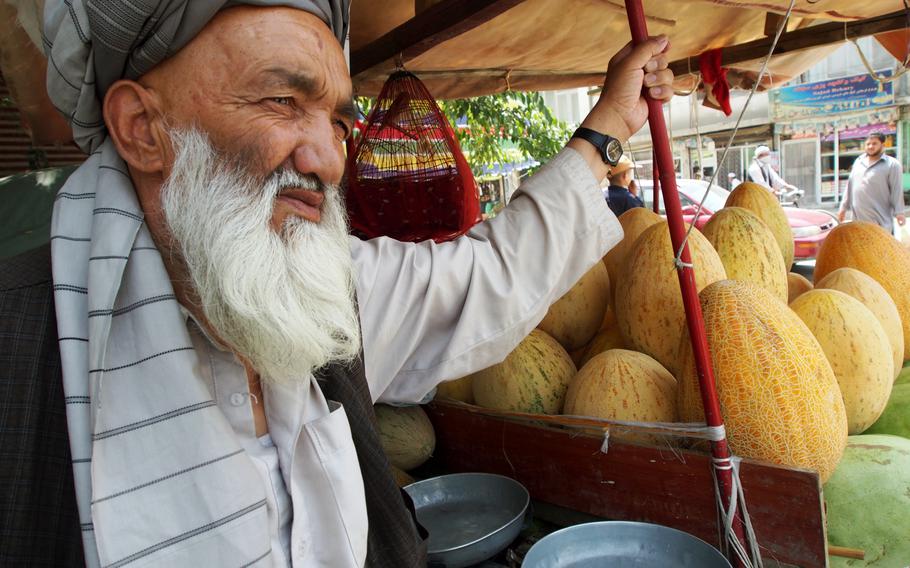 Mullah, 60, says police recently smashed his scale in an attempt to get him to move his melon cart in Kabul's Taimani neighborhood, a move he says would threaten his meager income. Across the city, municipal workers and police are trying to move street vendors from busy roadways and sidewalks in an effort to improve traffic flow and open up sidewalks. (Heath Druzin/Stars and Stripes)

KABUL — For years, Safiullah fought Soviet forces with the Mujahedeen, eventually stepping on a land mine and losing his right leg. These days, his battles are with a bureaucracy that is threatening his meager watch-repair business one broken glass case at a time.

Safiullah, who goes by one name, is one of the thousands of street vendors in Kabul who hawk everything from tomatoes to sunglasses, setting up shop on roadsides and on busy sidewalks. As much a part of Kabul life as a kite-filled sky in summer are the cries of street merchants as they call out their wares, sometimes through cupped hands, sometimes with prerecorded messages amplified by bullhorns.

Now, municipal authorities have decided these merchants are a menace to pedestrians and a catalyst for traffic jams, and officials have begun forcibly removing them, threatening the livelihood of some of the poorest Kabulis, many of whom are disabled or elderly.

“This is a big problem for us and we have been suffering for a few weeks,” Safiullah said.

At a major intersection of the Deh Afghanan neighborhood, where Safiullah has set up shop, dozens of vendors line the street, nearly all of them sporting display cases with cracked glass. The merchants all say police officers have smashed them in an attempt to intimidate them into leaving the area. While a reporter was speaking with vendor Ghulam Rasool, a police officer forcibly took down his umbrella, Rasool’s only protection from the broiling afternoon sun.

“He’s a nicer guy, he just removes umbrellas,” Rasool said, pointing to the broken glass of his display case full of electronics. “If the commander comes by, he breaks everything.”

Removing cart vendors from crowded streets and sidewalks is part of Kabul Mayor Muhammad Yunus Nawandesh’s campaign to clean up an overcrowded, traffic-clogged, smoggy capital. Already he has succeeded in paving much of the city’s street system, once a dusty collection of rutted dirt roads.

On top of slowing traffic by setting up shop in the street, vendors who crowd sidewalks force pedestrians to walk in the roadways, increasing their risk of being hit by cars, said Khair Mohammad Safdari, who manages street markets for the Kabul mayor’s office and is overseeing the campaign to move street vendors.

“This has caused a lot of problems for the residents of Kabul, not only for the drivers, but also for pedestrians,” he said, adding, “They have hurt the image of Kabul, making it look overcrowded.”

Asked about the heavy-handed tactics reported by cart vendors, Safdari said police and municipal workers try to be respectful, but are frustrated by cart vendors who keep occupying street space despite agreeing to stay in areas designated by the city as marketplaces.

“They broke their promises many times, so how much tolerance should the municipality show?” he said. “Sometimes the municipal workers lose their temper and have to show some action.”

By going after street vendors, though, the city is disproportionately hurting disabled people, who often have no other way to make money, said Gul Alam, an official with the Kabul Disabled People’s Union, a pressure group that advocates the rights of the handicapped. Alam and other activists for the disabled have staged several demonstrations in recent weeks to protest the uprooting of street vendors.

“Where should we go and what should we do?” he said. “We only have the ability to do small businesses, like cart vending, but the municipality and police won’t let us do that.”

Disabled vendors, especially, are feeling the pinch from the city’s campaign, said Obaid Ali, a political researcher at the Kabul-based Afghanistan Analysts Network, who authored a recent report on the crackdown.

“I’ve heard from many disabled people and many street sellers that they feel difficulties (from the campaign),” he said.

For Mullah, 60, a frail seller of melons, his well-trafficked spot in the Taimani neighborhood helps him support his family, send his two sons to school, and pay for hospital visits to address multiple health problems. He said he makes the equivalent of about $4 per day.

Recently, though, police officers told him he must move, smashing his scale on the pavement in the process.

“We will starve if they don’t let us stay,” he said.

Instead of uprooting cart vendors, the city should concentrate on creating a registration system for the vendors, a step that is long overdue, said Massoud, an economics professor at Kabul University who goes by one name.

“I don’t think they are creating a big problem for the city,” he said.

By harassing cart vendors, the local government and police are undermining a critical piece of the economy, Massoud said.

“It plays a vital role in the local economy and overall in the country’s economy. Since the government cannot provide job opportunities for the people, it’s very important that people can start their own businesses.”