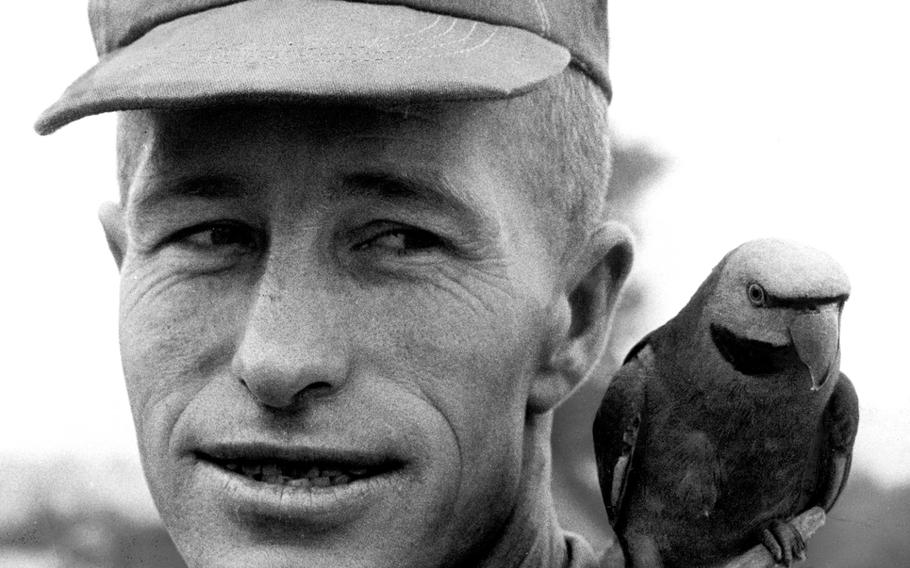 "Yeah, he's over in those bushes, but watch yourself he's in a bad mood this morning."

Are these members of C Btry., 2d Bn. 20th Arty, talking about a VC hiding in the bushes? Nope, it's "Charlie," the parrot mascot.

Charlie is a large, green jungle parrot of undetermined age who rules the roost around the battery. He is the meanest handful of feathers that ever wound up in a military unit.

His owner, First Sgt. Robert Cooley, of Galesburg, Ill., says that he got "ole Charlie" two months ago and he was really wild, now through his gentle care, he is meaner than ever.

He said, "When I first got him I couldn't do a thing with him, and now look. I can almost pick him up. That's progress."

Charlie takes to no man, but he does tolerate the first sergeant. He lives in the same hootch with Cooley and seems to like captivity fine, with the exception of having his wings clipped.

Cooley has built a cage and a small perch in his hootch for Charlie. There is also a rope that reaches the floor for him to climb.

He can be seen at all hours of the day walking around the compound, grouching to, himself in Vietnamese parrot talk and daring any man to cross his path. Few do.

But he doesn't know how to take the "great green birds" that sit out on the battery's helicopter pad, the Huey choppers the aerial rocket artillery unit flies.

Once he figures out how to control that small problem, then he will truly rule the roost.