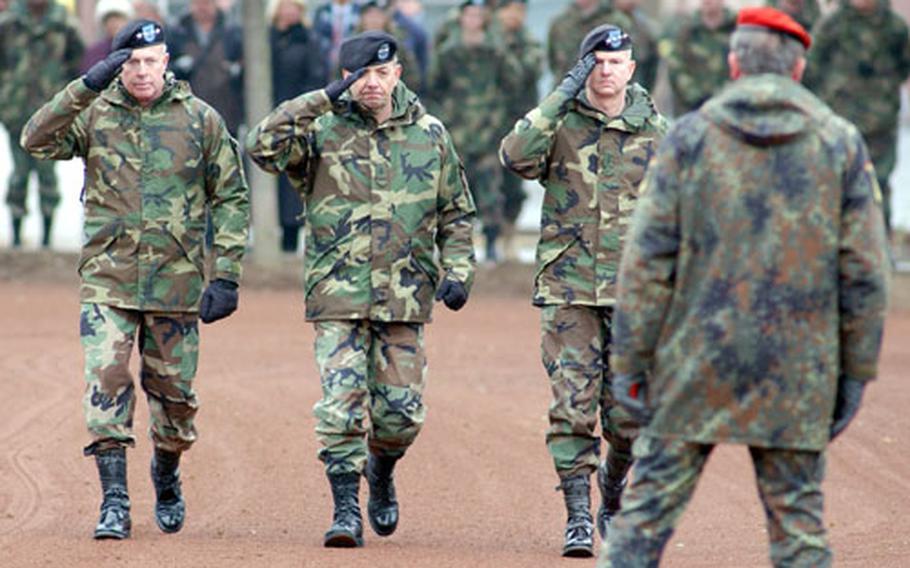 A promise to soldiers and their families was reaffirmed and a promise to a general&#8217;s wife was extracted at Wednesday&#8217;s ceremony marking the end of Gen. B.B. Bell&#8217;s command of U.S. Army Europe and the beginning of Gen. David D. McKiernan&#8217;s.

The reaffirmed pledge came from Marine Gen. James L. Jones, commander of the U.S. European Command and supreme allied commander Europe, while praising Bell as a &#8220;soldier&#8217;s soldier, a man of vision, a team player.&#8221;

Bell&#8217;s most lasting USAREUR accomplishment, Jones said, would be his plan for Army transformation, which will return two divisions of soldiers to the States and in which, Jones said, &#8220; &#8230; you&#8217;ve clearly articulated that all deployed soldiers will return to Germany first.&#8221;

That promise had been contradicted in May by an acting undersecretary of the Army, who said Germany-based, Iraq-deployed soldiers would head straight from there to the U.S., and that their families would move from Germany on their own and meet them there. Bell refused to budge from his position, and Jones&#8217; reiteration of the policy strengthens it further.

The second promise came from Gen. Gerhard Back, commander of Allied Forces Northern Europe, who said he knew that Bell&#8217;s wife, Katie, longed for a house on the banks of a river somewhere in the southern U.S.

Bell, standing under gray skies at Campbell Barracks in front of 400 NATO and USAREUR soldiers in formation and a host of dignitaries, friends and colleagues in the stands, smiled and shrugged, his palms up, as if to say this was one decision that was out of his hands.

The ceremony was a joint one with NATO&#8217;s Allied Land Component Command Headquarters Heidelberg in keeping with Bell&#8217;s command of the NATO headquarters, which now also passes to McKiernan.

McKiernan, who, as commander of combined allied land forces in the 2003 invasion of Iraq got his forces to Baghdad in 16 days, last served as U.S. Army Forces Command deputy and chief of staff at Fort McPherson, Ga.

Recently promoted to four-star general, McKiernan has spent 13 years of his military career in Germany, lived in Heidelberg as a child in the 1950s, he said, and is married to a German woman, Carmen.

Asked how he foresaw the mechanics of returning Germany&#8217;s two divisions and their thousands of soldiers and family members to the U.S., scheduled to begin on his watch, he said, &#8220;We can move equipment and flags &#8230; the most important thing is taking care of families.&#8221;

In his speech Wednesday, Bell quoted Harry S Truman on the importance of NATO and said the organization is more important now, &#8220;in this war of ideas and ideals,&#8221; than ever before. He lauded McKiernan as a &#8220;seasoned veteran&#8221; who USAREUR and NATO were lucky to have as commander.

He thanked generals, command sergeants major, soldiers, spouses and a war widow whose husband was killed in Iraq last Christmas Eve, for all their support and sacrifice.

But he saved his highest praise for his wife.

Bell wished everyone auf Wiedersehen, and was answered with a standing ovation and long applause.