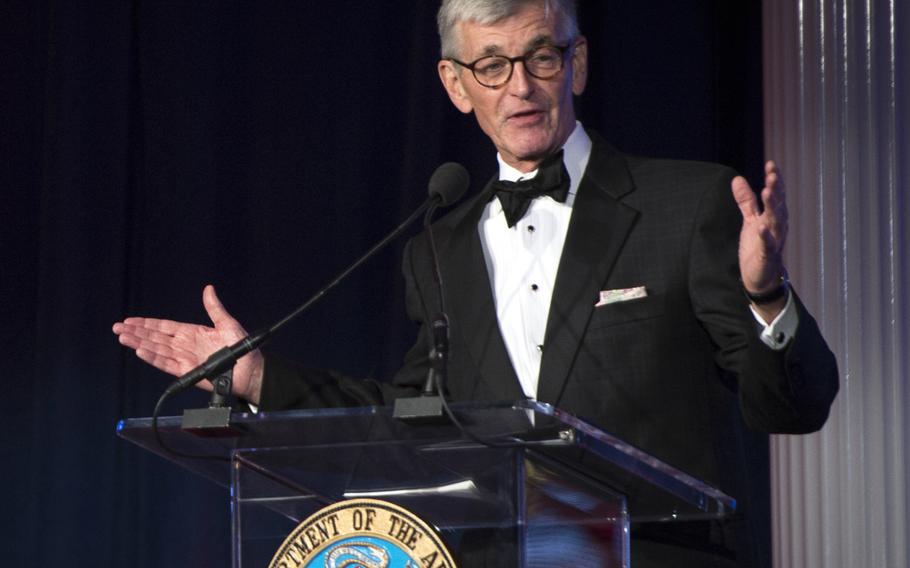 In this file photo from June 13, 2015, Secretary of the Army John McHugh speaks to guests attending the 2015 Army Ball in Washington, D.C. (John G. Martinez/U.S. Army)

WASHINGTON — Outgoing Army Secretary John McHugh was celebrated Friday as a “skilled leader” and an “exemplary steward” of Army values during a retirement ceremony in his honor.

McHugh has served as the Army’s top civilian through a turbulent six years, overseeing the withdrawal of tens of thousands of U.S. soldiers from two long wars and navigating the challenges of a shrinking force and budgets cuts in an increasingly unstable world.

Defense Secretary Ash Carter said McHugh has demonstrated his unwavering commitment throughout his tenure to the Army’s soldiers, their families and all Americans.

“He exemplifies leadership through heart and mind, through logic and strength and civility throughout a consequential career,” Carter said. “He’s earned a reputation for examining problems and devising solutions in innovative ways, and in doing so he has broadened our national security prospective and helped get our Army to the right place.”

The Army’s combined spending, which includes contingency operations and its base budget, has shrunk about 36 percent since McHugh took office. More so, the Army’s force size has been reduced from a wartime high of about 570,000 in 2010 to 491,000, with plans to reduce it to 450,000 by 2017. The reductions, mandated by sequestration, have come as the Army has had to respond to the rise of the Islamic State in Iraq and Syria, Russian aggression in eastern Europe and the rise of terrorist cells in Africa. The Army also has had to “rebalance” forces and resources toward the Asia-Pacific region.

McHugh thanked his family, defense leaders and President Barack Obama in his remarks Friday during the ceremony at Joint Base Myer-Henderson Hall, Va. But he also warned of the issues raised by a smaller, less-funded force in an unstable world.

“Less money. Fewer soldiers. More threats,” McHugh said. “That’s a posture largely unknown in our nation’s history, and one that unless something, somehow changes, places this Army and indeed the very interests of this nation in a very dark and a very dangerous place.”

Despite those challenges, Carter said McHugh has ensured the Army has a strong future.

“John has reset and recalibrated our force and forged a strong foundation on which to build even greater excellence,” the defense secretary said. “And in doing so he will leave behind an Army that is better, stronger and more prepared to succeed.”

McHugh, a native of Watertown, N.Y., the home of Fort Drum, served as a state senator in New York and nine terms in the U.S. House of Representatives before he was Army secretary.

He called the last six years “an incredible journey” and a “high honor,” adding they had been “without a doubt the most special moments of my life.”

Last month, Eric Fanning, who has worked as the acting undersecretary of the Army since February, was nominated by Obama to succeed McHugh, pending confirmation by the Senate.