McDonald’s could soon give Burger King a run for money 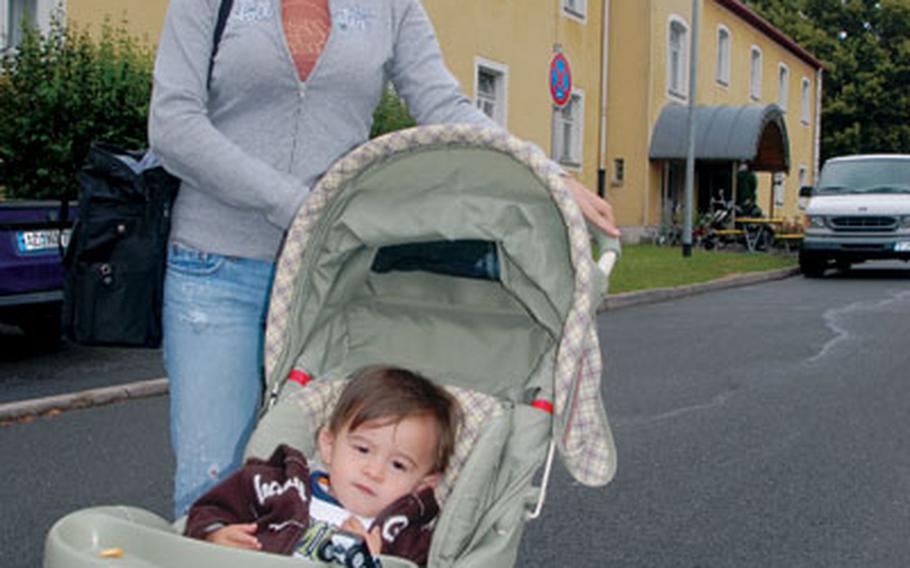 2nd Cavalry (Stryker) Regiment spouse Carol Moreno and her 15-month-old son, Matthew have lived at Vilseck’s on-post hotel, the Kristall Inn, since they arrived in Germany May 9. The family says officials told them a house will not be available until after Carol&#39;s husband, Sgt. Daniel Moreno, deploys to Iraq in August. (Seth Robson / S&S)

GRAFENW&#214;HR, Germany &#8212; U.S. personnel here may soon have a choice of American hamburger joints, with plans for an off-post McDonald&#8217;s restaurant to compete with the on-post Burger King.

Grafenw&#246;hr mayor Helmuth W&#228;chter said Tuesday that McDonald&#8217;s representatives recently visited the town scouting for restaurant sites. &#8220;They are looking for a location in the area,&#8221; he said.

Personnel stationed at Grafenw&#246;hr are excited about the news. Vilseck High School seniors Sean Anderson and Dara Rodgers, both 17, were at Burger King snacking on Anthony&#8217;s Pizza on Thursday but both said they&#8217;d be regular McDonald&#8217;s customers if and when the restaurant opens.

An attraction for Grafenw&#246;hr locals at any new McDonald&#8217;s might be the ice cream. The Grafenw&#246;hr Burger King does not serve ice cream and the only ice cream at the base is a watery concoction that oozes from a malfunctioning machine at the Camp Normandy dining facility.

&#8220;German McDonald&#8217;s is a little different than American McDonald&#8217;s but it pretty much tastes the same,&#8221; she said, adding that her favorite menu items are the McChicken sandwich, the Royal (cheeseburger) and French fries.

McDonald&#8217;s public affairs staff did not respond to Stars and Stripes&#8217; e-mails about the new restaurant.