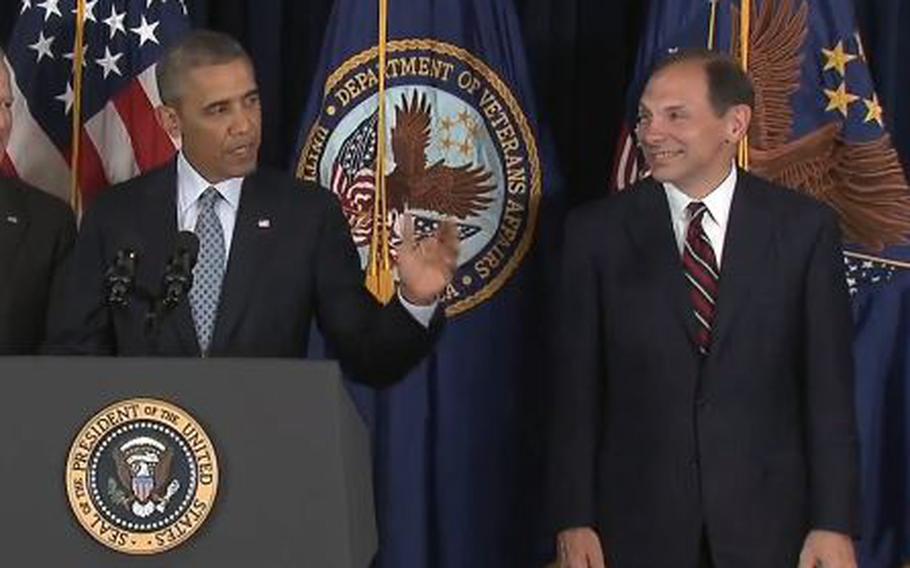 President Barack Obama nominates former Procter and Gamble executive Robert McDonald as the next Veterans Affairs secretary as he makes a statement to reporters at the Department of Veterans Affairs in Washington, Monday, June 30, 2014. (White House video)

WASHINGTON — Bob McDonald, President Barack Obama’s pick to head up the troubled Department of Veterans Affairs, faces such a hidebound bureaucracy that experts say the way forward is clear: He must clean house.

“McDonald has to walk in and kind of dismantle all of those structures that would keep the culture in the same place,” according to Todd Henshaw, the director of executive leadership programs at the University of Pennsylvania Wharton School of Business. “If you’ve been in an organization that’s failed across the board the way the VA has, the writing is on the wall and probably a lot of the senior people have to go … He’s going to need some people coming in from the outside” with “some experience and some success leading organizations through turnarounds and transformations.”

James Clawson, a professor with the University of Virginia Darden School of Business, agrees.

McDonald needs to do a “clean 100 percent sweep of senior management,” he said in an email. “You can’t get to ‘B’ with the horses who got you to ‘A.’ ”

Public outrage, political pressure and media scrutiny have mounted with revelations of gross misconduct and mismanagement at the department’s hospitals, and veterans groups are fuming after accusations that long wait times for patient care, which VA employees covered up, led to the deaths of numerous veterans.

The VA system has also been plagued by a massive claims backlog which has kept veterans from receiving the benefits they’ve earned.

McDonald, a former Army paratrooper, was tapped by President Barack Obama to take over the VA due to a belief that his management experience, including a stint as president and CEO of business giant Procter & Gamble, makes him an ideal candidate to cure the department’s ills.

There is legislation making its way through Congress that would give the VA chief broader authority to fire people, and Henshaw believes turning it into law is a critical step in rooting out bureaucrats.

Professor J.P. Eggers at the New York University Stern School of Business, said the new leadership also needs to evaluate middle managers to figure out whom to empower and whom to sideline.

“I would thoroughly expect that there would be a number of interviews [and] conversations to try and identify … the ones who are too far gone to save in terms of their commitment to the existing status quo, versus the ones who have the potential for leadership, who have the reputation within the organization, and will have the willingness to push for change; and finding ways to get those people as involved as possible in identifying problems [and] identifying solutions,” he said.

Clawson said McDonald needs to start implementing changes as quickly as possible, although transforming the system will be a multi-year process.

“No. 1, the public expects it,” he said. “No. 2, you’ve got patients in line who are waiting for it. No. 3, the longer you wait to make the changes the more difficult they become, because the residual culture will continue to eat away at your strategy.

“In the first six months, if [McDonald] can’t describe the charter for the organization, how we’re going to go about it, the speed at which we’re going to produce, and a willingness to get rid of the old folks and bring in new folks … he’s going to be sunk before he leaves the dock.”

Experts also emphasized the importance of putting the right diagnostic systems in place and having clear metrics to identify problems and track progress.

McDonald needs to make “heavy investment in IT infrastructure to get good current data,” Clawson said, and he should have outside auditors confirm the information he’s getting from insiders.

Henshaw thinks all veterans being served by the VA should be given online customer satisfaction surveys with questions that McDonald and his team develop.

“All of that information could be aggregated and distinguished by region, by hospital, by doctor, [and] by program. I mean, we’re in the big-data century, right? So he would have access to all the customer service data he would want … Part of being customer-focused is hearing the voice of the customer,” Henshaw said.

Steven Spear, a senior lecturer at the MIT Sloan School of Management who has consulted for major health care providers, including the Boston area VA, said the VA’s information systems need to measure things “as close to real time as possible” because speed is of the essence when trying to tackle problems in the health care field.

More than private sector leaders, McDonald will have to be politically savvy, according to leadership experts.

“A very deep challenge for a leader at the VA or any other organization like it is constantly shifting … political winds that can pop in with the best of intentions. That to me is the biggest challenge of running this kind of a system,” said Hal Gregersen, the executive director of the MIT Sloan Leadership Center.

Henshaw warned that it will probably take five years or more to transform the VA, but McDonald might get fed up and not stick around that long if his reform efforts are thwarted by outside players.

“As CEO of Procter & Gamble … he was always kind of running his own business, even though he had to keep stakeholders happy … That’s very different than leading a government bureaucracy like the VA, where Congress has oversight,” Henshaw said. “I imagine that he’s going to get very frustrated by Washington, by Congress, by legislation, by budgets. And I wouldn’t be surprised if he left when the president left [in January 2017] just because he felt like he wasn’t being as impactful as he thought he could be.”