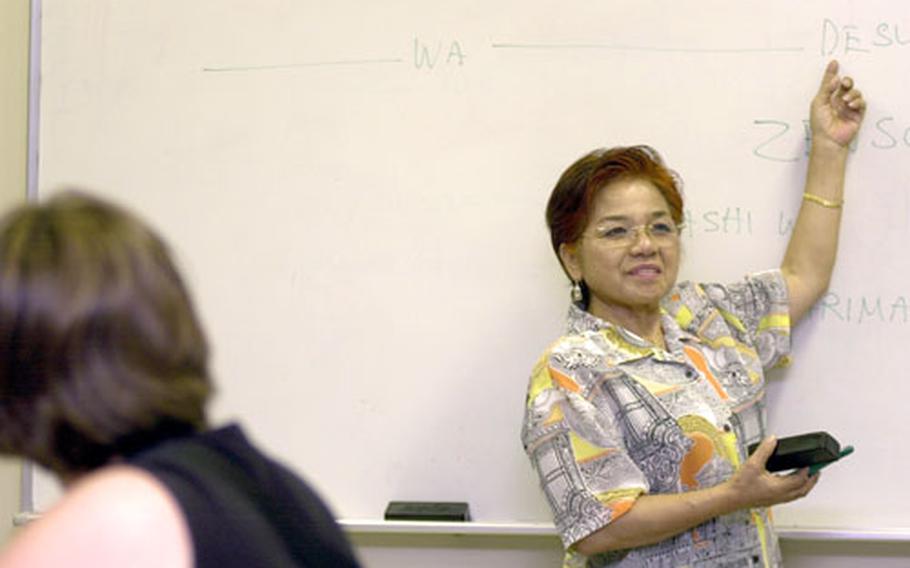 OKINAWA &#8212; Learning Japanese words, a group of Americans found Wednesday evening, is almost the easy part of learning the language: Even Japanese sentences are structured differently.

Still, Americans at the Marine Corps Community Services Japanese class at Camp Kinser Wednesday evening plunged into a way of speaking in which the usual order of putting things gets turned on its head.

&#8220;We live out in town &#8230; we needed to be able to communicate with our neighbors,&#8221; explained Emily Albright, attending the class with her husband, Petty Officer 1st Class Steven Albright.

&#8220;Many Americans are here two or three years and if they know some of the expressions, they can be more involved in the community,&#8221; said Urasaki, who coordinates the free Japanese language classes MCCS offers on most of the Marine Corps bases here.

Okinawan volunteers teach both survival and beginner&#8217;s-level Japanese classes in the evenings here, she said.

Yoriku Kinjo, who has volunteered to teach this month&#8217;s class at Camp Kinser, said, &#8220;If you learn the language, then when you go off the base, you can talk to the Japanese people.&#8221;

Class schedules are available at www.mccsokinawa.com, the Okinawa MCCS Web site. Students must sign up before attending a class but seats usually are available and people can attend the same class more than once, according to MCCS.

Those who complete the beginner classes and wish to learn more should attend a university course or visit Japanese-language Web sites, Urasaki suggested &#8212; advice the Albrights said they plan to take.

Urasaki also suggested improving language skills by talking with Japanese. She said MCCS also coordinates a volunteer group that provides conversational Japanese and meets periodically at the Kadena Coffee House. Those interested in the group should call DSN 645-3127 for more information.

&#8220;Go to the local English classes and teach English; then you will learn Japanese too&#8221; from the students, she said.