McChrystal's future unclear ahead of meeting with Obama 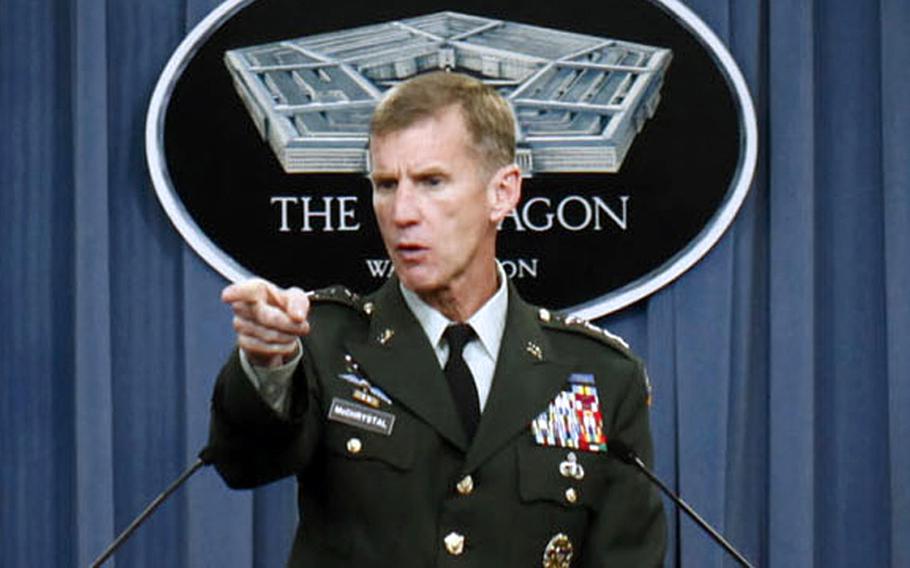 WASHINGTON &mdash; With his support quickly disappearing in Washington, Gen. Stanley McChrystal on Wednesday will face his commander in chief in Washington to explain a series of contemptuous remarks about the president and his administration that the general and his staff made in a magazine article this week.

The outcome of the meeting could range from a stern rebuke to the outright dismissal of the U.S. and NATO commander in Afghanistan, who has angered President Barack Obama before because of his outspoken nature.

Joint Chiefs of Staff Adm. Mike Mullen contacted McChrystal to express his displeasure at the Rolling Stone story and Defense Secretary Robert Gates released a statement that did little to quiet speculation that McChrystal&rsquo;s tenure as commander could be nearing an end.

&ldquo;I believe that Gen. McChrystal made a significant mistake and exercised poor judgment in this case,&rdquo; Gates said. &ldquo;We are fighting a war against al Qaeda and its extremist allies, who directly threaten the United States, Afghanistan, and our friends and allies around the world. Going forward, we must pursue this mission with a unity of purpose. Our troops and coalition partners are making extraordinary sacrifices on behalf of our security, and our singular focus must be on supporting them and succeeding in Afghanistan without such distractions.&rdquo;

Asked at a press briefing Tuesday if McChrystal&rsquo;s job was in jeopardy, Gibbs said carefully: &ldquo;We&rsquo;ll have more to say after that meeting.&rdquo;

When questioned after a Cabinet meeting late Tuesday, Obama said he was keeping his options open. "I think it's clear that the article in which he and his team appeared show poor judgment. But I also want to make sure that I talk to him directly before I make any final decisions."

McChrystal promptly apologized after the story became public Monday evening, but he did little to calm the furor brought on by a series of critical remarks about the president and key members of his administration.

In the story, McChrystal&rsquo;s relationship with Obama is portrayed as lukewarm at best. One McChrystal advisor said the general was disappointed when Obama seemed unprepared during their first one-on-one meeting and didn&rsquo;t know anything about him.

McChrystal says he felt betrayed when a cable was leaked to the press in which Karl Eikenberry, U.S. ambassador to Afghanistan and a retired Army general, urged Obama not to send more troops to Afghanistan because there is no credible government there.

&ldquo;The Boss says he&rsquo;s like a wounded animal,&rdquo; the unidentified aide said. &ldquo;Holbrooke keeps hearing rumors that he&rsquo;s going to get fired, so that makes him dangerous.&rdquo;

In his apology, McChrystal said: &ldquo;I have enormous respect and admiration for President Obama and his national security team, and for the civilian leaders and troops fighting this war, and I remain committed to ensuring its successful outcome.&rdquo; CBS News later reported that he had offered a letter of resignation.

Word of McChrystal&rsquo;s call to Washington spread quickly through one hard-fighting military camp in Afghanistan, where soldiers have chafed at McChrystal's efforts to safeguard Afghan civilians by limiting the military's freedom to fire on Taliban militants.

&ldquo;Hey, McChrystal might get fired,&rdquo; said one young officer.

Officers in the embattled company command headquarters joked and cheered. They complain that they are spread too thin, even in areas that are supposed to be critical to the long term strategic goals of the counterinsurgency and mock their &ldquo;partnership&rdquo; with Afghan security forces who aren&rsquo;t ready to take the lead.

&ldquo;Good,&rdquo; said one servicemember, hearing the news. &ldquo;That man and his [Rules of Engagement] have got to go.&rdquo;

And while commanders say they have found ways to get around them, younger officers recount the numerous times they&rsquo;ve been pinned down in the open fields of Afghanistan&rsquo;s rural countryside by enemy gunfire, and feel helpless to respond because a civilian might be harmed or his compound damaged.

&ldquo;I lost two guys on this deployment,&rdquo; said one first lieutenant. &ldquo;I can&rsquo;t say for sure &mdash; I don&rsquo;t want to put it on anyone&rsquo;s head &mdash; but I feel like if we had been allowed to be more aggressive from the get-go, they wouldn&rsquo;t have died.&rdquo;

&ldquo;McChrystal might be getting fired,&rdquo; one officer told another with a laugh.

Then he went out to smoke a cigar.

At another base, one officer suggested that McChrystal&rsquo;s approach was working and he didn&rsquo;t foresee the mission changing.

And a junior noncommissioned officer brushed off the news as irrelevant to soldiers at his level.

&ldquo;I just want to make it through this deployment,&rdquo; he said.

However, when pressed, he acknowledged that if McChrystal is replaced he&rsquo;d like to see some of the rules of engagement loosened so that soldiers could go after the enemy more aggressively.

&ldquo;I joined the Army to find and kill the people who blew up our buildings,&rdquo; he said. &ldquo;Some people feel we&rsquo;re not so much an army anymore as we are a police force. ... If you know somebody is bad, then we should go after them, instead of just letting them get away, which is what happens sometimes.&rdquo;

In response to the article, Sens. John McCain, R-Ariz., Joe Lieberman, I-Conn., and Lindsey Graham, R-S.C., issued a statement, calling McChrystal&rsquo;s comments &ldquo;inappropriate and inconsistent with the traditional relationship between Commander-in-Chief and the military.

&ldquo;The decision concerning General McChrystal&rsquo;s future is a decision to be made by the President of the United States.&rdquo;

McChrystal assumed command of U.S. and NATO forces in Afghanistan after the previous top commander was deemed ineffective and fired in March 2009.

Shortly after taking command, McChrystal conducted a review of the situation in Afghanistan. His report, which was leaked to the press in September, said the mission in Afghanistan, as planned at the time, would fail.

A low point in McChrystal&rsquo;s relationship with the White House came in October when Obama reportedly chided McChrystal for publicly dissing Biden&rsquo;s idea of using fewer troops and unmanned aircraft to attack terrorists in Afghanistan, saying it would lead to &ldquo;Chaos-istan.&rdquo;

McChrystal had requested up to 80,000 extra troops, but he was granted about 30,000.The content of Rolling Stone article shouldn&rsquo;t have come as a surprise to McChrystal, according to the magazine&rsquo;s executive editor.

Eric Bates told MSNBC on Tuesday that McChrystal did not object when the magazine read quotes to him as part of its fact-checking process.

&ldquo;They had a sense of what was coming and it was all on the record and they spent a lot of time with our reporter, so I think they knew that they had said it,&rdquo; he said.