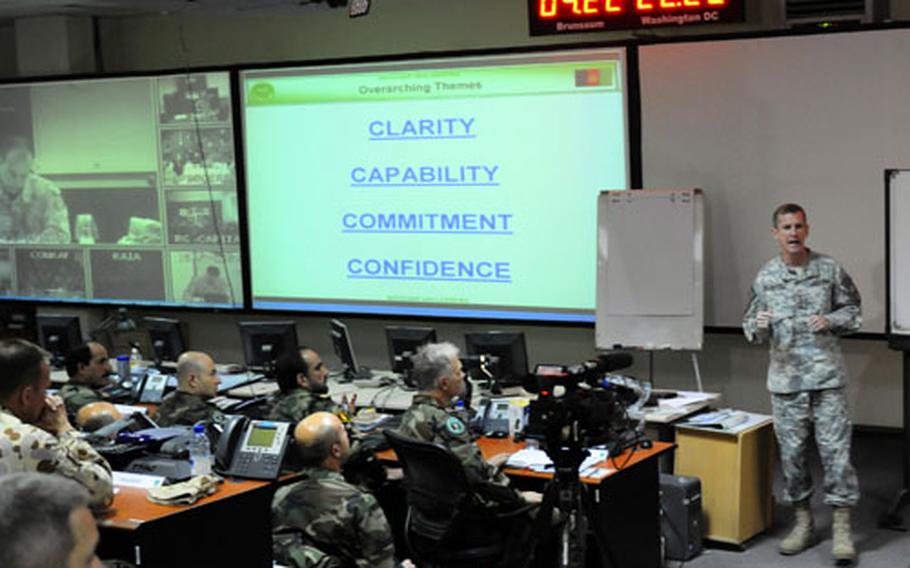 Calling the announcement a &#8220;clear commitment to the way ahead,&#8221; Gen. Stanley McChrystal said the extra troops will allow U.S. and coalition forces to establish security in more of the insurgent-controlled areas of the country while allowing coalition troops to train and build up Afghan security forces to ultimately take over.

&#8220;We have clarity of our mission as was outlined by the president this morning,&#8221; McChrystal told his staff in Kabul in a special briefing that he would be repeating to staff at other bases around the country throughout the day. &#8220;We have clarity about what it is we are here to do, and we are here to provide the government of Afghanistan and our Afghan partners [the] time, space and capability to defend their sovereignty. And standing between them and that is an insurgency that we have been fighting and we will now take on with even greater vigor.&#8221;

But he warned that while an end goal is attainable, it won&#8217;t come easy.

McChrystal said that the additional forces send a clear signal to the enemy and help boost the confidence of the Afghan people, who must believe in their own government if the fight is to be won.

In a searing assessment of the state of the war that he completed over the summer, McChrystal said that without a strong reinforcement of coalition troops, a new, comprehensive counterinsurgency strategy and an end to the rampant corruption in the Afghan government, the war would fail.

He warned at the time that the commitment would have to be far reaching and long range to achieve results, and described a strategy that was as much about nation-building as military warfare.

&#8220;Counterinsurgency is always about what people think at the end of the day,&#8221; McChrystal said Wednesday.

Speaking to reporters in Kabul a short time later, McChrystal said the expanded coalition troop levels will establish pockets of security where governance could be established. But he would not elaborate on how that governance will break free of the corruption culture that pervades not just politics but the Afghan police and army as well.

&#8220;The challenges are significant,&#8221; he said. &#8220;There&#8217;s no way to get around that. But I think the importance is equally significant. &#8230; I think additional forces will allow us to create more security in areas first to take away from the Taliban sense of momentum and also put a sense of momentum on our side. I won&#8217;t minimize there are places where sometimes it looks insurmountable, but I don&#8217;t believe it is.&#8221;

McChrystal cited one success in particular:

&#8220;In Logar province there&#8217;s an area, Baraki Barak,&#8221; he said. &#8220;Some months ago it was almost under complete insurgent control. Now with a partnership between coalition forces, Afghan forces and local government and some smart counterinsurgency techniques, some reinforcement of local leadership, violence is down something like 80 percent and it is all because we link up and partner and we make it work.&#8221;

Commanders, local politicians and residents in Baraki Barak say that despite the decrease in attacks, there&#8217;s still a long way to go.

Since a combat outpost was stood up next to the district&#8217;s government center in March, paratroops with Troop A, 3rd Squadron, 71st Cavalry Regiment have established a &#8220;security bubble&#8221; and worked to empower the fledging local government while using those local politicians to explain the less palatable parts of counterinsurgency, such as house raids, Troop A commander Capt. Paul Shepard said.

Still, progress with the local government is slow, and most of the district lies outside this bubble, where insurgents operate freely.

He also stood by his assessment that the Afghan National Security Forces need to more than double from current numbers to 400,000, which he believes can be done in four years.

He said some of the new forces will go directly to training the Afghan security forces, and the goal is that in six to eight months, all coalition forces and Afghan army or police forces will be partnered.

&#8220;That&#8217;s our goal. We don&#8217;t have enough forces to touch all areas. What we are doing is focusing on the highest priorities now, the most difficult areas to do partnering. As the ANSF grows, (this) gives us coalition forces to partner with them.&#8221;

McChrystal acknowledged that even within the leadership in Kabul, there is sometimes a crisis of confidence that this war can be won. When speaking to his staff earlier in the day, he didn&#8217;t sugarcoat the cost of the way ahead, stressing the end goal.

&#8220;There will be more long nights, more cold days, more memorial services, more frustration, more questions, more answers to questions,&#8221; he said. &#8220;But there will also be more Afghans with a chance, more Afghans with security, more Afghans with the ability to make the choice for their future to build the country the way they want it. So now is the time to go forward.&#8221;

Stars and Stripes&#8217; Geoff Ziezulewicz contributed to this report.