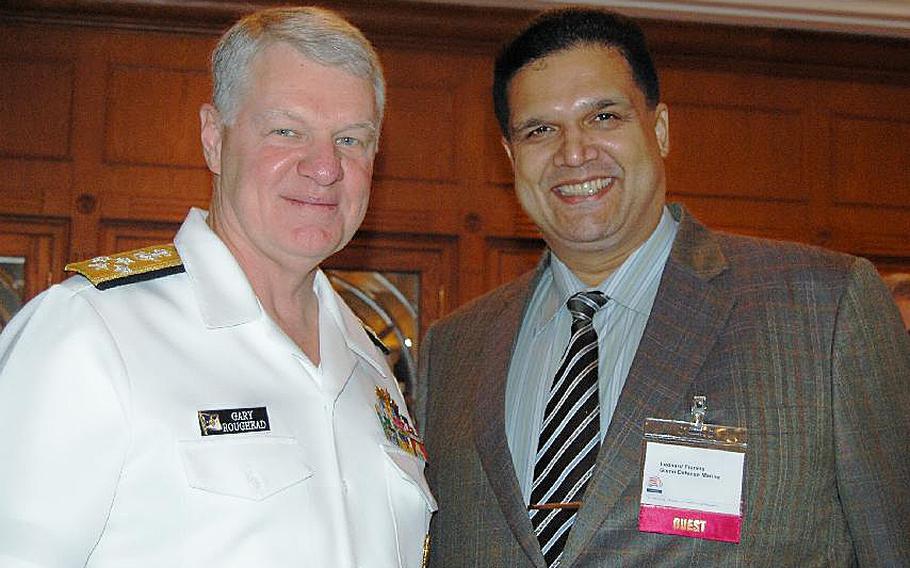 In this undated file photo, former Chief of Naval Operations Adm. Gary Roughead poses with Leonard Glenn Francis, also known as 'Fat Leonard,' who admitted to bribing Navy officials with cash, luxury travel and prostitutes for classified or inside information that benefited his firm. Roughead has not been implicated in the case. (Navy League of the United States, Singapore Council)

WASHINGTON — Sen. Claire McCaskill on Tuesday pressed Navy Secretary Ray Mabus to explain how the service is holding commanders accountable for a far-reaching case of bribery among sailors and contractors.

The Missouri Democrat, known for going after corruption and waste, told Mabus and the Senate Armed Services Committee that the so-called Fat Leonard scandal rips at the fabric of integrity in the Navy but that too often responsibility for military wrongdoing rests on middle and lower ranks instead of leadership.

Mabus was before the Senate to testify about the upcoming defense budget, but the Navy has been shaken for more than a year by Navy officers and enlisted sailors — as well as high-level civilians — pleading guilty to charges they provided classified information to Leonard Glenn “Fat Leonard” Francis, 50, the owner of Glen Defense Marine Asia, for money, luxury travel and prostitutes.

McCaskill said the service should ensure the “consequences go to the very top … rather than hanging out in the middle or the bottom.”

The Navy secretary recounted his recent censure of three admirals, including the commander of naval forces in Japan, which resulted in the announcement of those officers’ retirements in February.

Two other admirals lost their access to classified materials in November. Mabus said the service is still looking into their cases and has not confirmed allegations of wrongdoing.

“We are going to hold people accountable that violated either the law or Navy ethics,” Mabus said.

After a three-year secret investigation, the Navy is now somewhat frustrated that it cannot move more quickly to prosecute wrongdoing but some parts of the case depend on the U.S. attorney’s office in California, he said.

Meanwhile, the Navy has overhauled its procurement requirements and regulations to guard against similar abuses, Mabus said.

“You can have all the ethics training in the world. If somebody doesn’t know its wrong to steal or to take a bribe, they missed something at home,” he said. “We need to set up a system to catch them.”

Francis pleaded guilty in January in San Diego to working with Navy contacts to bilk the Navy out of about $20 million by steering ships to specific ports in the Pacific and falsifying service charges.